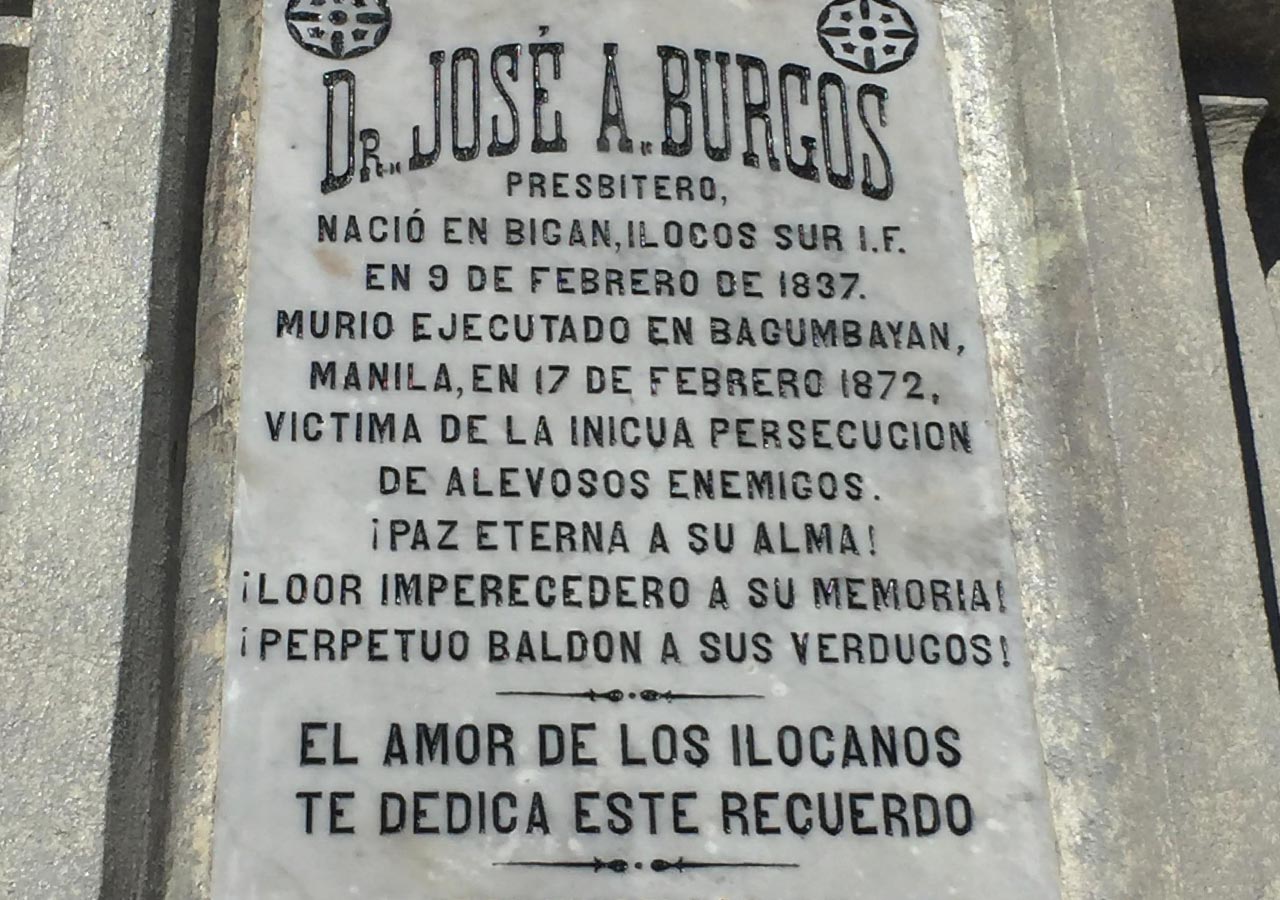 At the heart of Plaza Burgos in Vigan City stands this monument, a dedication of love of Ilocanos dated February 17, 1910, for their beloved hero, Fr Jose Apolonio Burgos who died with Mariano Gomez and Jacinto Zamora at Bagumbayan Field, now Luneta, on February 17, 1872, because the Spanish military tribunal charged them with sedition and treason. (photo and text by Imelda C Rivero/PIA Ilocos Sur)
by Imelda Castro-Rivero / PIA1 Ilocos SurPosted on February 23, 2019February 23, 2019

Fr. Jose Apolonio Burgos, illustrious son of this city, is always in the heart of every Ilocano.

“El amos de los Ilocanos te dedica este recuerdo. 17 de Febrero de 1910.”  (Dated February 17, 1910 the monument is dedicated by the love of the Ilocanos.) These words are inscribed on marble cemented on the side of an obelisk or monument standing at the center of Plaza Burgos in this city.

In its four sides, are marble markers where his birth and death are written in Spanish, Ilocano and English.  His last words before he was garroted are also encrypted in marble: “Naudi a Sao a Binalicas ni P Burgos idi nganngani madingpil. Sinaona on comisario bozcaza. ‘Pacaoanenca senor, quet sapay coma ta pacaoanennaca met ni Apo Dios.’  Idi impatugaoda di banco. ‘Ngem ania ti nacabasolak? Matayak a castoy? Diosco, aoan ti justicia ditoy rabao ti daga. Awan ti basolco.’ Idi agpacaoan ti Verdugo sinungbatanna, ‘Pacaoanenca, anacco, tungpalem ti annongmo.’” (He expressed his forgiveness to the man who put him to death, and prayed to God to forgive him also, urging him to do his job. When he was sitted on a bench, he prayed that he has done no wrong, that there is no justice on earth.) His statue was added in the western part of the plaza about 10 years ago.

When the nation remembered the martyrdom of GOMBURZA, the three priests – Fr Jose Apolonio Burgos, Mariano Gomez and Jacinto Zamora – who were executed by garrote at Bagumbayan Field, now Luneta Park, on February 17, 1872, because they were charged with treason and sedition by the Spanish military tribunal, this city remembered to the core Fr. Jose Burgos as one of its heroes.

“This was not only a way to celebrate his life and values in the month of hearts because Burgos was born on February 9, 1837 and died on February 17, 1872, but also a way to place him deeper in the heart of every Bigueno, and every Filipino,” said Leo Masuli II, museum tour guide.

“Burgos left a legacy to Filipinos, especially to the Philippine national hero, Dr Jose Rizal,” he added.  A close friend of Paciano, Rizal’s older brother and mentor, Burgos, through his death and those of the two priests, deeply moved Rizal to write “El Filibusterimso,” his second novel. And through Rizal’s writings Filipinos came to learn how to fight for their rights in their own country.

“The heart of the Ilocanos can be felt at Fr. Burgos House any day of the year,” said Masuli. “Through his house, now a part of the museum complex, he is always with the Ilocanos. This is where the abel Iloco is on exhibit: the various designs of antique and new abel, the pagablan or loom, the actual weaving process every Saturday where visitors can learn how to weave by watching a native do the weaving.”

Meanwhile, the Department of Education Vigan City Division led by Superintendent Anselmo Aludino has been keen in helping students learn more about Burgos in their studies.  He said that two schools named after Burgos, the Burgos Memorial School East and Burgos Memorial School West, celebrate their school day in February with activities like a parade in the city streets, quiz bee and art exhibit on the life of Burgos.

A most loved Filipino hero, Burgos is remembered in many places in the country as evidenced by the towns named after him in Ilocos Norte, Ilocos Sur, Isabela, La Union, Pangasinan, Quezon, Southern Leyte and Surigao del Norte.