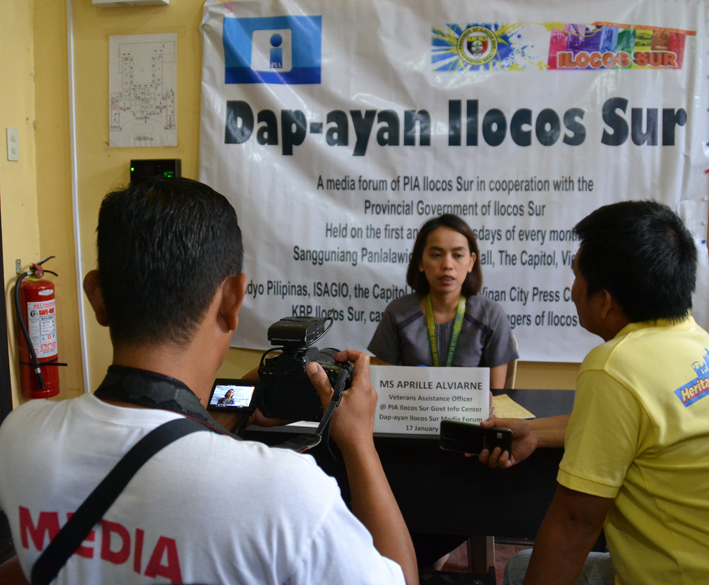 VIGAN CITY – Only 80 senior veterans are alive today in Ilocos Sur. There are only 390 in Region 1. They are the only ones left in the region to receive the additional P15,000 monthly pension provided by Republic Act 11164, “An Act Increasing the Monthly Old-age Pension of Senior Veterans.”

“The senior veterans are the veterans of World War II, and the wars in Korea and Vietnam,” said Aprille Alviarne, Veterans Assistance Officer of the Philippine Veterans Affairs Office in the province based at the Provincial Capitol, speaking to local media during the “Dap-ayan Ilocos Sur” media forum of the Philippine Information Agency (PIA) Ilocos Sur Government Information Center on January 17, held at the PIA office at the Capitol in this city.

“The old-age pension of these senior veterans who are still alive shall be increased to P20,000.00 per month. But the veterans of Korean and Vietnam wars who are already receiving pension from the Armed Forces of the Philippines (AFP) are not qualified for this increase,” she said.

Another important part of the law states that the increase shall be limited to the eligible living senior veterans and shall not be transferable to any family members and/or dependents of the senior veterans. “So, the widows of dead senior veterans who are now receiving monthly pension of P5,000 are not qualified in this increase,” she added.

The law was approved by President Rodrigo Roa Duterte on December 20, 2018, after it was passed by the Senate of the Philippines as Senate Bill No 1766 on October 8, 2018 and adopted by the House of Representatives as an amendment to House Bill 7525 on October 10, 2018. It shall take effect 15 days after its publication in the Official Gazette or in at least two national newspapers of general circulation.

Alviarne hopes that with the help of the local media, the provisions of this law will be announced in the whole province. (Imelda Castro-Rivero/PIA 1 Ilocos Sur)