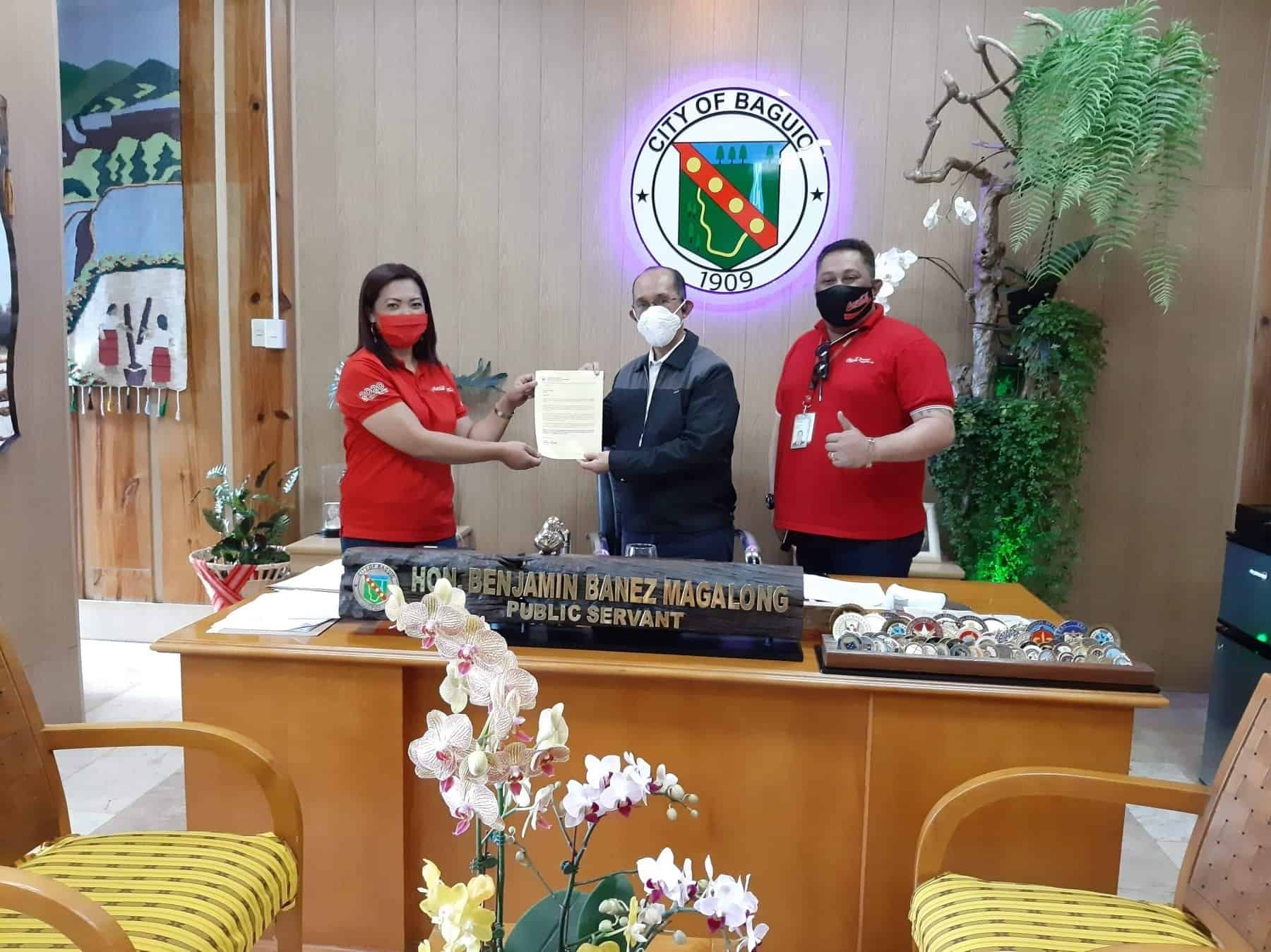 Coca-Cola Philippines Company Territory Sales Manager Karl Baden Dirige and Business Developer Janeth Martin turning over the P2,090 collected from the three carts stationed at the Central Business District, Irisan barangay and at the Baguio City Hall to Mayor Benjamin Magalong. (photo from the Facebook Page of the Public Information Office - City of Baguio)
by Ace AlegrePosted on June 22, 2020June 26, 2020

BAGUIO CITY — Baguio folk’s honesty despite the COVID-19 crisis impressed no less than the highest-ranking officer of one of the country’s biggest beverage distributors.

Coca-Cola Beverages Philippines, Inc. Chief Executive Officer Gareth McGeown was amazed by the integrity of city residents, when he received the inventory report of the company’s honesty cart project here.

“In Baguio, the amazing thing is that when they reviewed the inventory, there wasn’t a peso or bottle missing,” McGeown shared in a message to the company workforce all over the country. McGeown described the Baguio honesty cart experience as “an inspiring story.”

Company Territory Sales Manager Karl Baden Dirige and Business Developer Janeth Martin told Mayor Benjie Magalong that the honesty cart experience will be presented during the Coca-Cola GT Connect which will be participated in by around 3,000 employees from Coca-Cola’s companies around the world.

Magalong praised residents for living up to their reputation as a disciplined and honest lot amid the hardship wrought by the pandemic as shown by the result of the honesty cart project set up in three areas in the city since the ECQ last May.

In her report, Martin said there was no under-collection but the exact opposite in the payments from the items sold in the unguarded store carts as they collected a total of P2,090 against the collectible amount of P1,756 or an excess of P334 from the carts’ operation from May 9 to June 10.

“Looking at the audit report, there was even an over-collection. We can say that people of Baguio are amazingly honest. I am so proud,” the mayor said as he also cited the Coca-Cola company for taking chance on the project.

Dirige and Martin turned over the P2,090 collected from the three carts stationed at the Central Business District, Irisan barangay and at the Baguio City Hall to the mayor as assistance to the city government’s community kitchen project for COVID-19 frontliners.

Encouraged by the positive result, Coca Cola said it will put up three additional carts in three more areas of which proceeds will be given to host areas. The additional locations are at the SSS and Pag-ibig office sites and at the Victory Liner waiting shed area.

As with the first three carts, these will be left unattended 24/7 and buyers are free to get the item and drop the payment in a built-in contraption.

“The honesty cart is aligned with the Wilkins on Wheels (WoW) Project created by Senior Manager Kenneth Deslate, and we are the first here in Baguio to implement the project… with the support of our Trade and Marketing Supervisor Ariel Boado and Exclusive Stills Distributor, Sacred Heart Savings Cooperative headed by Gen. Manager Valmar Cabaya who extended their distributors discount to the workers we accommodated so they can have a source of living and of Rudy Diaz representing Veterans of Foreign Wars of the US Post 124 who transports the honesty carts, stocks and the workers,” Martin said.

Aside from helping the poor, the project also aims to promote honesty as a core value and to gain an insight on how the locals cling to this value in times of hardship, according to Martin. ●