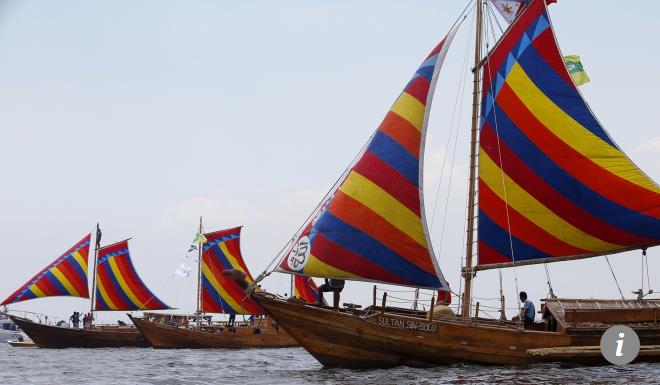 by COAST GUARD DISTRICT NORTH WESTERN LUZONPosted on May 28, 2018

SAN FERNANDO CITY, La Union — After twenty-two (22) days, the three (3) primitive wooden sailboats called Balangay are expected to arrive at the Pier 2, Poro Point, City of San Fernando, La union on 19 May 2018 at around 06:00 to 08:00 AM. Arrival Honors would be rendered to the 33 crew of Balangay Expedition Team led by USEC ARTURO T VALDEZ, the expedition leader for providing distinct honor and recognition to our beloved country.

The three (3) identical wooden sailboats, a well-crafted centuries-old design, departed from Poro Point, City of San Fernando, La Union bound for Xiamen, China last 28 April 2018. After spending six (6) days in Xiamen, China, the Filipino Balangay Crew members rode a train to Dezhou in the Eastern province of Shandong, since the Grand Canal linking to the city is no longer navigable. Hence, the Balangay Expedition aims to commemorate a voyage in 1417 taken by Sultan Paduka Pahala, most famous for being the first sultanate of Sulu to be buried in Shandong, China. The Sultan of Sulu, six hundred (600) years ago, set on sail from the Southern Philippines to pay tribute to the Yongle emperor of the Ming dynasty in Beijing.

The expedition’s story began in 2009, when Art Valdez and his crew set sail from Tawi-Tawi in the Southern Philippines on a 17-month voyage that called the ports of Brunei, Indonesia, Singapore, Thailand, Cambodia and Vietnam. The original plan to continue on to China was abandoned due to bad weather. This was supposedly the first attempt in 2017 that mark the 600th anniversary of the historical journey of Sultan of Sulu. (COAST GUARD DISTRICT NORTH WESTERN LUZON)