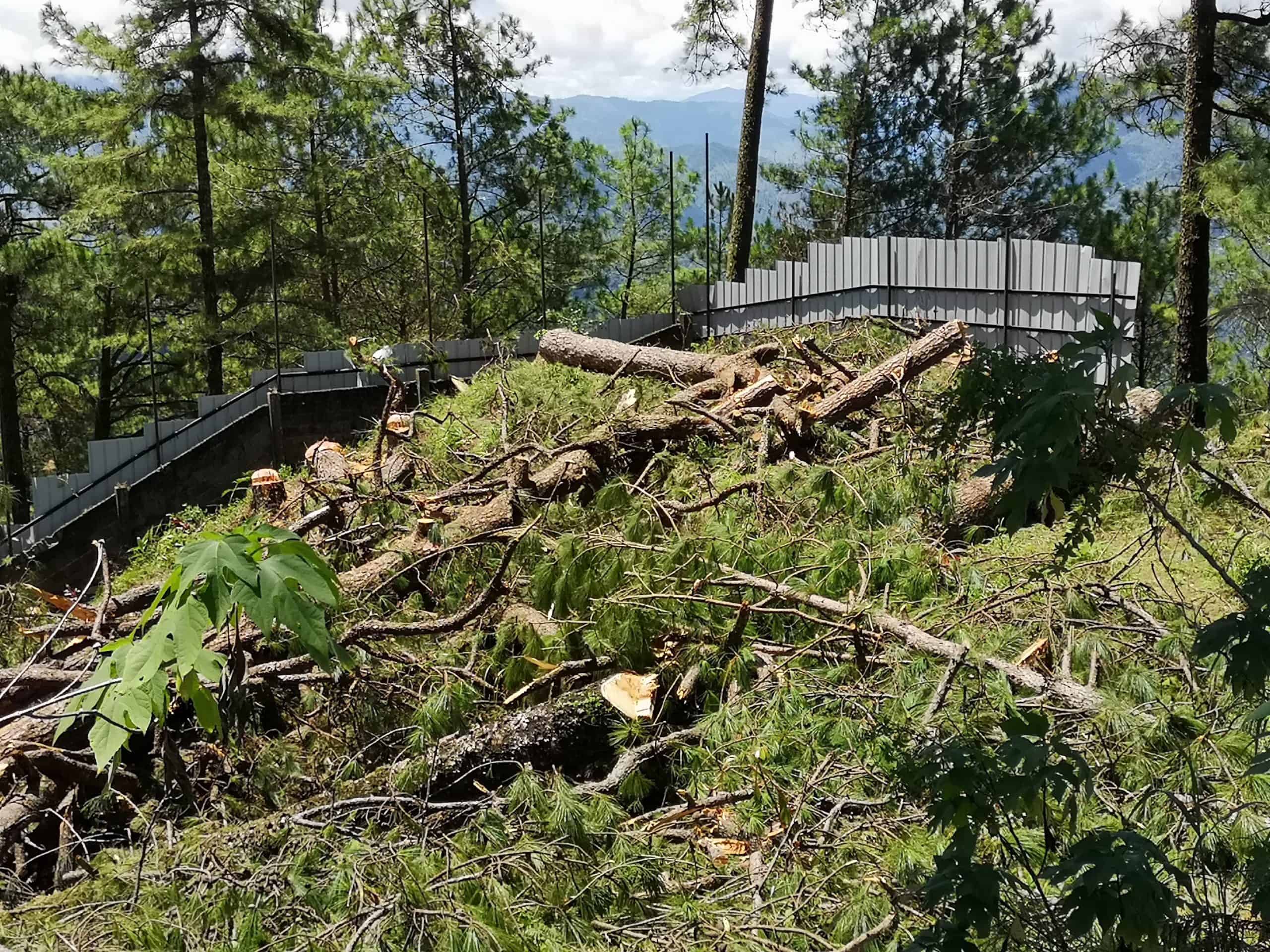 BAGUIO CITY— The area where 53 natural grown Benguet pine trees and one Norfolk pine tree were felled to give way for a high-rise condominium by private developer Vista Residences Inc., (photo by Ace Alegre)
by Ace AlegrePosted on June 29, 2020July 3, 2020

BAGUIO CITY — At least 53 natural-growth Benguet pine trees and a Norfolk pine tree are about to fall to give way for yet another property development by a subsidiary of Vista Land Development Corporation owned by Manuel Villar at Barangay Outlook Drive here.

The tree cutting started Wednesday, more than a month after a Special Private Land Timber permit was granted to Vista Residences, Incorporated on May 4, 2020 by the Department of Environment and Natural Resources (DENR) Central Office.  The DENR issued Permit No. SPLTP No. CAR-58-2020 will pave way for high-rise condominium buildings. The validity of the permit will end on July 15, 2020.

The DENR stated that the said permit is subject to pertinent forestry laws, rules and regulations, while the developer, it said, was ordered to replace the fallen trees strictly with 5,400 Benguet pine tree seedlings.

Only last October, Baguio City Mayor Benjamin Magalong was pushing for a moratorium on tree cutting and construction of commercial buildings. He then claimed that Malacañang approved the moratorium
in principle.

A Baguio netizen said that the people have been fighting a good and fierce battle against the cutting of trees for so long. “We are supposed to be healing the land, why wound it anew?  And 54 trees are a lot. You might as well have razed a fire that burned the forest,” the resident lamented.

Another Baguio resident wrote an open letter addressed to Magalong on the continuous cutting of trees in Baguio. “Throughout the years, a lot of private owned companies have already made it possible to cut down numerous trees.This is done for the sake of erecting buildings that take up wide spaces of land that used to be home to hundreds of trees. This concerns us citizens knowing that Baguio is a place abundant with natural resources and part of what makes this city beautiful are our trees responsible for producing fresh and clean air,” the resident pointed out.

The resident sought the mayor’s help in stopping tree cutting due to building construction projects from ever happening in the future. “This tree cutting activity is only one among many others that has already been implemented in the past and we hope that no more of these projects should be authorized in the future,” stated in the letter.

Disappointed, Baguio City Mayor Magalong said, “we are saddened because we feel it is a big blow to our Regreening Master Plan amidst our request to the Office of the President for a tree-cutting moratorium.” Circumstances like this emphasizes the need to hasten the issuance of the moratorium on tree-cutting and construction of high-rise buildings in the city by the national government, he pointed out.

Magalong though promised, “while the proposed moratorium has been taken over by this health crisis, we need to follow this up to ensure that our remaining trees will be preserved.”

DENR-CAR records showed that the property owner applied for a special private land timber permit in 2018, went through the lengthy process and complied with all the requirements including the Environmental Clearance Certificate (ECC), barangay certificate and mayor’s clearance which can only be issued after ample investigations and public consultations.

Records further showed that the company was required to redesign the original plan to reduce the number of trees to be affected.

The owner also complied with the compensatory requirement of 100 tree seedlings to each tree felled.

In a meeting with the DENR-CAR executives led by Regional Executive Director Ralph Pablo and the property owner on June 25, the mayor asked the owner represented by Engr. Ferdinand Salcedo to double the replacement to 200 per downed tree, to which the latter agreed.

With tree cutting sanctioned by government, protest is gathering steam via an online petition in a bid to persuade authorities to stop the cutting of trees by withdrawing the cutting permit.

But protests might just be too late as tree cutting operations have almost downed the 54 trees by Thursday, June 25, which was ironically Arbor Day.  Even the yearlings or tree saplings were not spared after they were hit by the falling branches and trees during the firm’s cutting operations. ●