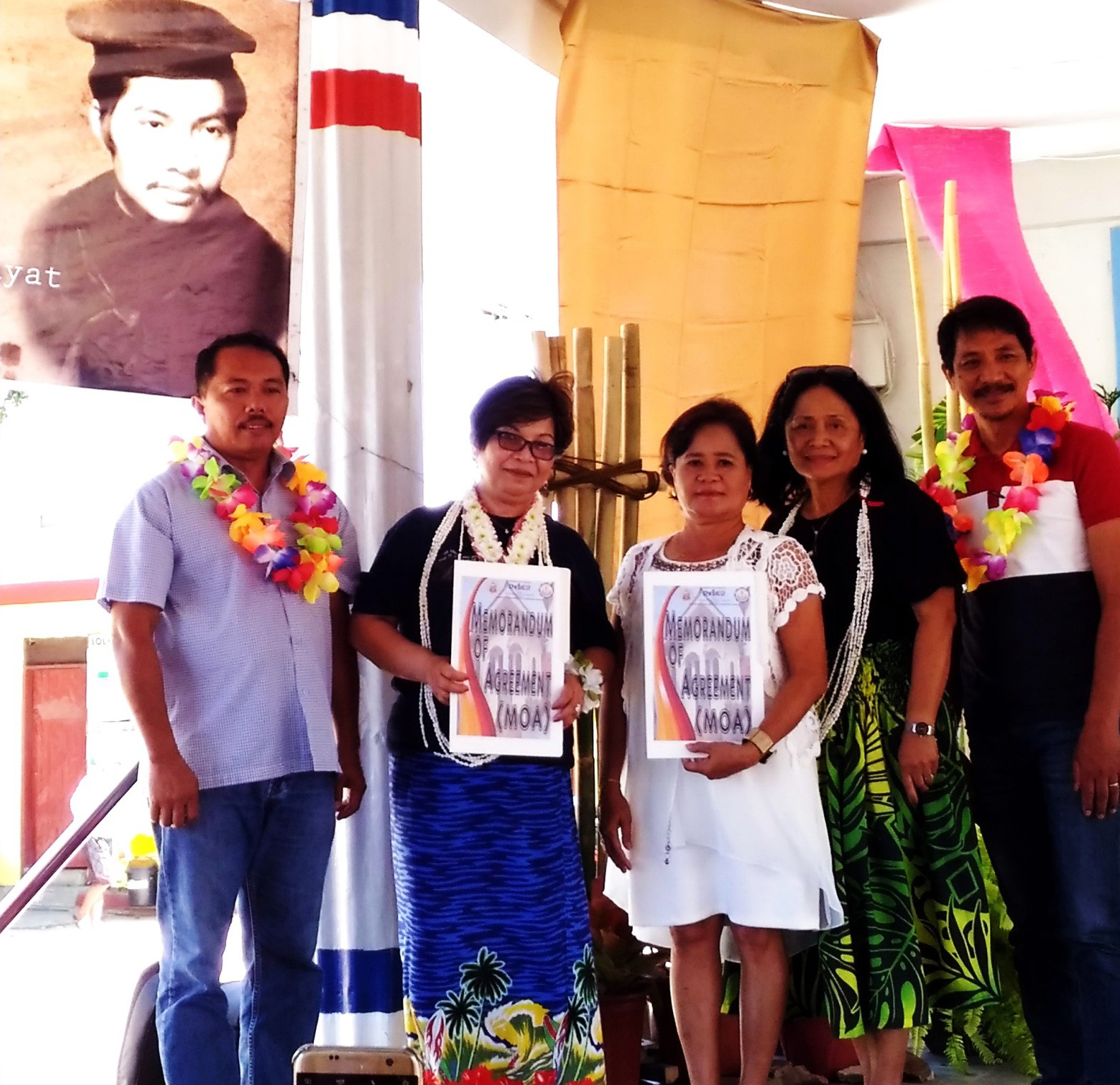 JENNY ALCAUSIN (2ND FROM LEFT) AND JULIANA PILA of Cabaroan-Cabalangegan Elem School (CCES) hold copies of the MOA as they pose for remembrance in front of the tarpaulined image of Mario Albalos, Feb. 2 at CCES in Cabaroan Laud, Vigan City. At left is Vigan City DepEd Superintendent Alselmo Aludino.
by Edward B. AntonioPosted on February 5, 2018January 20, 2019

VIGAN CITY – It started with a love story and ended up with a classy, hi-tech library dubbed as “Biblioteka ni Ayat” (Library of Love).

Jenny Alcausin of Cabaroan-Daya in this city formally turned over to the Vigan DepEd through a Memorandum of Agreement and Deed Donations, February 2 morning, the Mario Albalos Library which she built in honor of his long-time love Mario A. Albalos, one of the most prolific literary writers and civic leaders Ilocos Sur has ever produced.

The turn-over ceremony and inauguration of the library building pooled the Albalos and Alcausin clans together as well as the media and various government officials at the school’s covered court in an emotionally-filled program which centered on the life of Mario Albalos.

The library now stands inside the compound of Cabaroan-Cabalangegan Elementary School where most of Albalos’ writings, pictures, memoirs and memorabilia are displayed to serve as living treasures and references for all budding youth writers.

The MOA was signed by Alcausin herself and Juliana Pila, Teacher In-Charge of the school and witnessed by Vigan City Superintendent Alselmo Aludino, Priscilla Albalos de la Cruz, Mario Albalos’ sister and former Hawaii Congressman Felipe “Jun” Abinsay among others.

Jenny Alcausin and Mario Albalos were childhood friends and eventually became sweethearts separated by unfateful circumstances. Albalos went on to join the US Navy and settled in Hawaii after he was afflicted with a kidney disease. Alcausin graduated as nurse through Mario’s help, worked in the country and eventually in the United States, but all throughout these periods, their communication continued even after Jenny married a Belgian national whom she divorced in 1996. Albalos died in 1990 in Hawaii at age 40.

Alcausin unabashedly said Mario, a Thomas Jefferson Award recipient, is her one and only true love and regretted the day that she did not marry him when Mario was ready to settle down, hence her idea of putting up the “Biblioteka Ni Ayat,” as a lasting memory of her undying love for Mario Albalos whose literary and civic achievements remain unsurpassed by any Ilocano writer to date. (Edward B. Antonio)