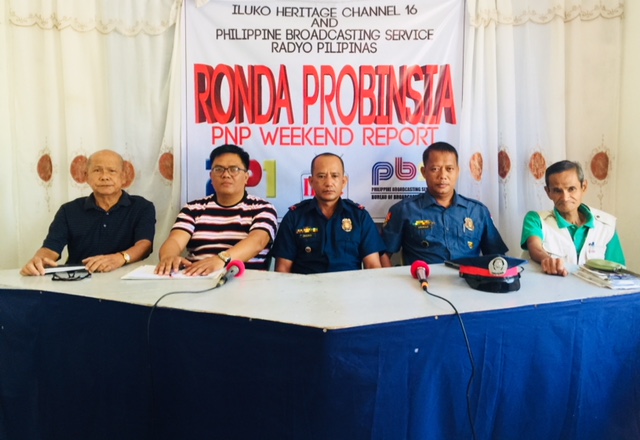 VIGAN CITY – The cultural traditions of “budong” and “sapit” still form an integral role in the common laws of upland municipalities.

This was revealed by two police officials during an interview in the cable tv program Ronda Probinsia- PNP Weekend Report aired over Iluko Heritage Channel 16.

Police Senior Inspector Reynante Inong, Chief of Police of the municipality of Lidlidda, revealed that the cultural traditions are still very much alive and that they play vital roles in maintaining peace and order in rural areas and in mountainous communities and villages like Lidlidda.

Inong explained that villagers would think twice before committing any wrongdoings or getting involved in illegal activities, because anyone can be penalized by the village elders as traditionally done for a long time.

He said, the practice is an agreement between the elders and residents of the barangay that once a person commits an infraction, he is immediately penalized.

Inong clarified however that this is not municipal ordinance but a part of cultural tradition.

Meanwhile, SPO4 Ruben Aninag said that in some other cases in Gregorio del Pilar, feuds between families are being heard in their “Barangay Justice”.

In the Barangay Justice, the elders decide the “sapit” (punishment).

He said, they have a local court-like system wherein the suspect, complainant and witnessess are called to shed light on what really happened.

He also said that if a person is known to commit crime or cause trouble repeatedly, he will be expelled from the village.

The upland municipalities, particularly in Ilocos Sur’s 2nd district, have kept their rich cultural traditions and practices despite the onset of technology in the 21st century.

Another dominant practice is the “budong” or “Council of the Elders” wherein the old people of the village decide important matters pertaining to local, domestic problems such as family feuds, land conflicts and others.

The two police officials said that the Itnegs comprise the indigenous peoples of Lidlidda while the Kankanaeys comprise those in Gregorio del Pilar.

The program Ronda Probinsia-PNP Weekend Report seeks to spread the advocacies of the PNP and create public awareness about its flagship programs and projects such as its campaign against illegal drugs and all forms of criminality, OPLAN SITA, OPLAN KATOK, PEACE and ORDER as the cornerstone of the PNP Patrol Plan and sharing of best practices among Municipal Police Stations.

The program is a partnership between Iluko Heritage Channel and Philippine Broadcasting Service-Radyo Pilipinas with the support of the Ilocos Sur Police Provincial Office. It is broadcast live over IHC-16 every Saturday from 11am to 12nn. (Omar Anthony T. Aquino)