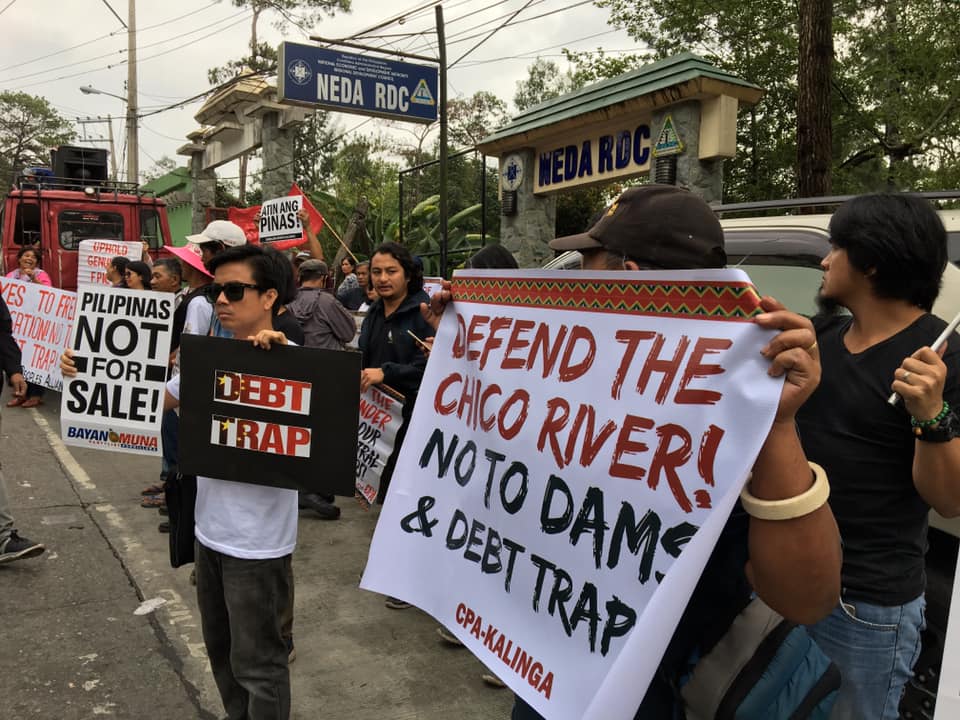 FILE PHOTO. Various concerned groups staged a protest rally against the Chico irrigation project at the NEDA RDC office in Baguio City, last May. The irrigation project is funded by loans from China and has raised fear that it may be a debt trap, in addition to causing environmental problems. (photo courtesy of Cordillera Peoples Alliance)
by Ace AlegrePosted on August 26, 2019September 30, 2019

TABUK CITY — The Department of Labor and Employment of the Cordillera Region fined the Chinese contractor of the P4.3B Chico pump irrigation project in Kalinga for violating labor standards by employing Chinese workers without the necessary employment permit.

DOLE-CAR regional director Exequiel Ronnie Guzman said his office fined China CAMC Engineering Company Ltd. P250,000, while the 25 Chinese workers were also fined P10,000 each. Guzman added that his office also required the Chinese workers to apply for an alien employment permit together with the P9,000 each filing fee.

“The hiring of foreign workers by contractors is not actually prohibited, provided that those hiring them comply with the primary requirement of securing their alien employment permit,” Guzman explained.

The DOLE-CAR official admitted that the work of the Chinese workers was classified as highly technical by the National Irrigation Administration (NIA) claiming that the tunnelling technology and units of equipment to be used in the project are not yet available in the country.

But he explained that DOLE needs to publish the vacancies to allow local contractors to challenge in case such technology and equipment are in fact available in the country ensuring that the Chinese workers do not compete with the available local labor market.

According to Guzman, the contractor of the Chico pump irrigation project is a state-owned construction company in China that has actively participated in multi-billion-peso projects along the Agno river and in Ilocos Sur over the past two decades.

Guzman disclosed that officials of Chinese firm admitted their failure to secure the required permits before allowing the Chinese workers, partly blaming NIA for allegedly not informing them about the requirements.

He issued a stern warning against the Chinese contractor not to commit any violation of its contract and existing labor standards because his office will be constrained to cancel the permits and ask for their deportation.

Under existing policies, the labor department is mandated to issue alien employment permits to foreign workers doing highly technical jobs in the country for a maximum period of 2 years depending on the need of the contractors hiring the services of the foreign workers.

Some of the Chinese workers were advised to apply for the issuance of their permits in Region II considering that their base of work is in Tuao, Cagayan, the major recipient of the irrigation project. ●