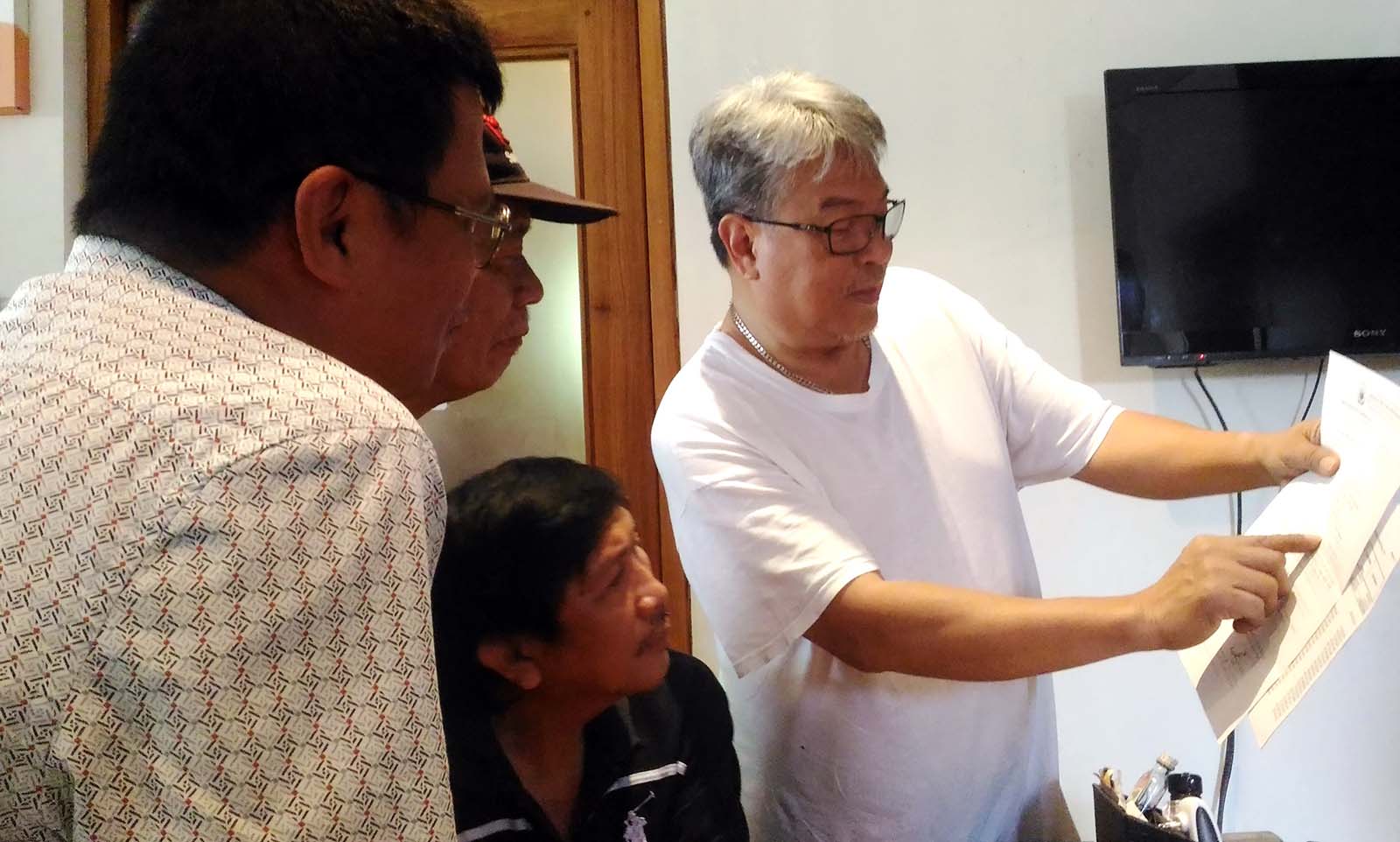 TRANSPARENCY. Cong. DV Savellano (right) shows to the media RA 7171 records relevant to his RA 7171 congressional share in one of his interviews with the members of the Ilocos Sur Integrated Press. (photo by Edward B. Antonio)
by Edward B. AntonioPosted on January 14, 2019January 20, 2019

“I want to continue these big projects until the end of my term – some of which are already finished, and besides, I am chosen by the BILEG Party as its official (congressional) candidate.”

This was the answer of Congressman Deogracias Victor “DV” Savellano to why he is running anew this May 2019 during a press interview at his residence here over the weekend, citing some of his biggest projects over the last two years as the representative of the province which he wants to continue.

Among the projects he cited are the improvement and extension of Salomague Port in Cabugao that will cater to docking cruise ships paired with a coastal road linking it with Vigan airport which will ferry cruise ship tourists directly from the port to the city.

“I have coordinated with the Philippine Ports Authority, the Department of Transportation and the Department of Tourism for these projects and once these projects are finished, these cruise ships will dock here as they committed and that will boost again our tourism industry, trade and economy. Moreover, I have filed again Congressman Salacnib Baterina’s bill transforming the area into an economic zone,” he said.

He next announced the soon-to-be-opened Bantay-Banaoang-San Quintin-Languiden Road and the Cabugao-Nueva Era-Danglas Road that will serve as gateways for more people from Ilocos Norte and Abra to come to Ilocos Sur to transact business or join Ilocos festivities such as fiestas.

“As part of our development plan to ease traffic in the Metro Vigan area, we have also started to construct a bypass road that will connect Taleb, Bantay and San Ildefonso via Phil Science High School. The road will also traverse from Lingsat (Bantay) to Lao-ingen (Sto. Domingo), Patong (Magsingal) and eventually to Badoc, Ilocos Norte,” he said.

He also announced the construction of another bypass road starting at Beddeng, Vigan and exiting in Barangay Aggay, Bantay (national highway) for people to use instead of going there via traffic-laden Vigan City and a gigantic river-control project from Banaoang, Bantay to Raois, Vigan which will eventually become a highway to the city.

Citing more of these infrastructure projects, Congressman Savellano also said that the Barbar (San Juan) Dam is already finished and that he is presently working on the construction of the Gaco Irrigation Project in Cabugao town.

“Moreover, by 2020, we will start the construction of another irrigation canal from Ilocos Norte to Sinait. I have also coordinated with the National Irrigation Administration for the construction of more small water-impounding and reservoir projects for the district,” he said.

“Adalem ti distritom, adalem dagiti naduma-duma nga ahensia tapno dagiti ka-distritoam, makinabangda ti pannaka-congressmanmo. I have studied these things conscientiously to become parts of our development plan, so I can function well as your representative of the 1st District of Ilocos Sur. But these are only infrastructure projects. We also concentrated in other areas of development,” he said.

In education, he said that he was able to look for funds for the construction of a lot of school buildings benefitting the towns and barangays. Aside from this, he said he was one of those who worked for the approval of free college education now being enjoyed by college students nationwide.

“I have worked for the allocation of big funds for the DepEd and CHED paving the way for the construction of many school buildings in the 1st District of Ilocos Sur. We have around 800 CHED scholars, too, and thousands of TESDA scholars because I always believe that education will help everyone to succeed in life,” he said.

In agriculture, aside from the usual farm equipment granted to accredited farmers’ associations, he said that through the help of Senator Cynthia Villar, he has allocated P100 million for the garlic and onion industry, P20 million of which is entrusted with the Nueva Segovia Consortium of Cooperatives (NSCC) in Caoayan, Ilocos Sur through its Chief Executive Officer Divina Quemi. He said that farmers are already availing of this fund since last year.

“Aside from these farm equipment and machineries which we have provided to our farmers, I am also looking forward to the improvement of our tobacco industry by providing our farmers with ample water, the proper fertilizer suited to our soil, flue-curing ovens (pugon), fuel and of course, capital. But in order to avail of these things, these farmers have to be organized in associations and registered with the Securities and Exchange Commission (SEC) and right away, after they have forwarded their resolutions, all their needs will be provided. And these aids are given annually. This is now the proper procedure so that the government can monitor the proper disposal of these funds,” he said.

He made it clear, however, that the funds he used and is using in the above-mentioned projects came from the national government and not from the RA 7171 funds as the usual perception of the people.

“Not a single centavo came from the RA 7171 funds in these projects. My RA 7171 congressional shares were all given to the municipalities of Sinait, Cabugao, San Juan, Magsingal and Sto. Domingo which they downloaded from the DBM. I also want to make it clear that these towns’ RA 7171 congressional shares are bigger than their town shares,” he said.

When asked if he is able to monitor the disposal of these funds, he said that all of these towns are compliant except Sinait and Cabugao. He did not elaborate further.

He also said that as a member of the powerful Committee on Rules, he favors the proposal that senior citizens reaching the age of 80 be granted P30,000 as old-age incentive; another P30,000 upon reaching 90 and the remaining P40,000 by age 100 instead of the usual P100,000 lump sum given to them upon reaching their 100th birthday.

In health and social services, he said that these are also his priorities ever since and that he can always be reached via text through his personal number 0917-539-832.

Congressman Savellano is a former vice mayor, provincial board member, vice governor and governor of the province. He is educated both here (Public Administration – University of the Philippines) and abroad at the Monterey Institute of International Studies in California, USA. His father was the late COMELEC Commissioner and former Cabugao town Mayor Victorino Savellano and his mother is the former Virginia Barbers of the popular Barbers clan.