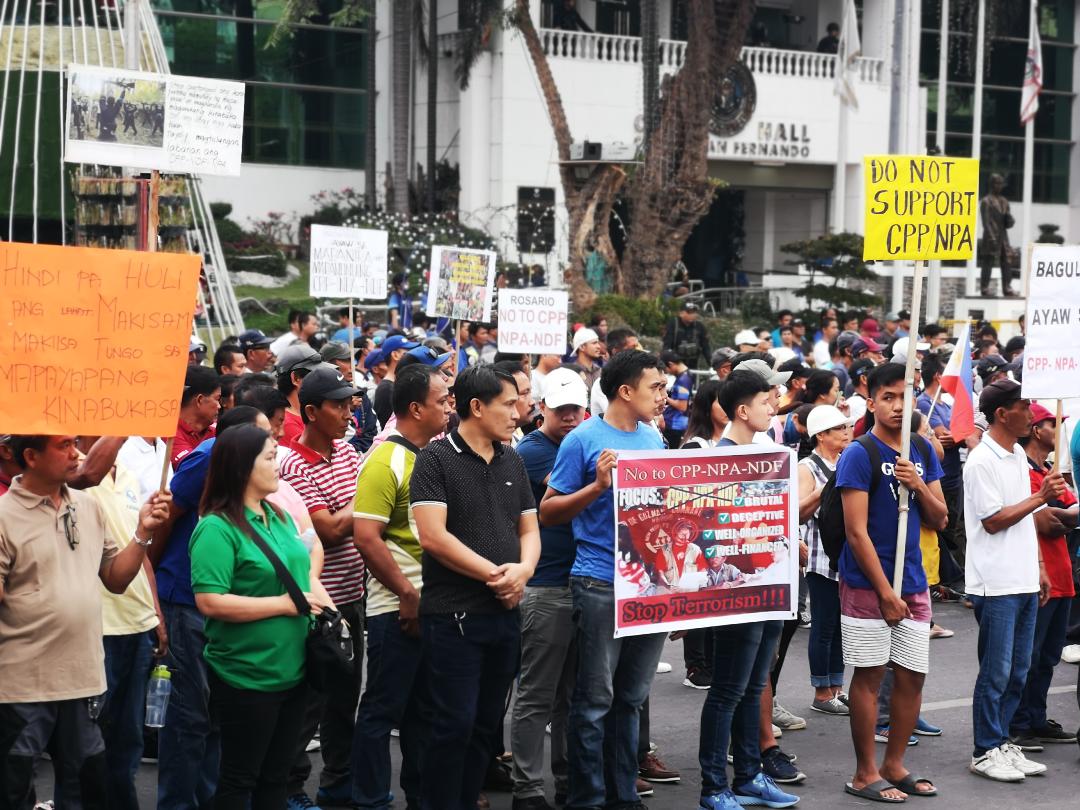 CAMP BGEN OSCAR M FLORENDO — Hundreds of participants from the National Government Agencies, Non-Government Organizations, and other sectors and private individuals in the community assembled infront of Don Mariano Marcos Memorial State University (DMMSU), San Fernando City, La Union early morning December 26 to join the extensive CPP-NPA-NDF Indignation Rally to support the peace and development building initiatives of the present administration and denounce all forms of violence, terrorism and atrocities that impede peace and development in the community.

Equipped with anti-terrorism flyers, tarpaulins and placards denouncing NPAs, the demonstrators marched along MacArthur Highway and assembled in San Fernando City Plaza for the burning of effigies of terrorism and the communist flag. Documentaries on the abuses, violent extremism and brutal killings committed by the CPP-NPA-NDF were also made available for public viewing.

In his message, Director Paul L Lalata, Provincial Director of the Department of the Interior and Local Government, La Union encouraged the consistent commitment to fully support the implementation of Executive Order No 70, series of 2018 that institutionalizes the Whole-Of-Nation Approach in attaining inclusive and sustainable peace, creating a National Task Force To End Local Communist Armed Conflict, and directing the adoption of a national peace framework.

Meanwhile, former rebel ‘Ka Noby’ also shared his 17 years journey in the hands of these communist groups. He revealed that all taxes collected by the revolutionary movement were solely enjoyed by Jose Maria Sison in Netherlands, while cadres continue to risk their limbs and lives fighting against the government without receiving anything.

He also appealed to the members of NPA and encouraged them to surrender and start a new life through the Enhanced Comprehensive Local Integration Program (ECLIP), a program of the government which ensure that surrendering communist rebels will have a holistic package of benefits they can avail of, such as livelihood assistance, medical assistance, education, housing, and legal assistance.