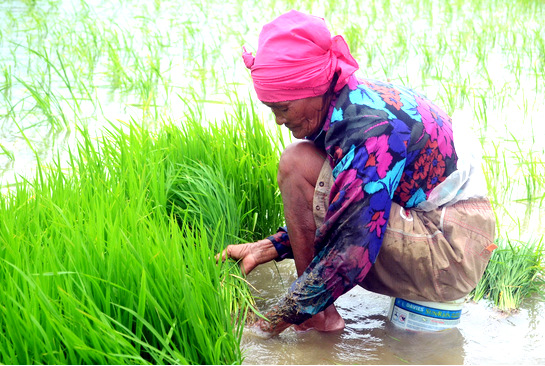 (FILE PHOTO) MY LIFE. A septuagenarian farmer washes the roots of the rice seedlings after pulling them out in a method called “sikka” in Magsingal, Ilocos Sur this July. The farmers next plant the seedlings manually (“raep”). (EDWARD B. ANTONIO
by APRIL M. MONTES-BRAVO / PIA Ilocos SurPosted on May 2, 2020May 2, 2020

ILOCOS SUR — The Department of Agrarian Reform (DAR) distributed a total of 1, 200 identification cards (IDs) to selected agrarian reform beneficiaries (ARBs) in Ilocos Sur for them to be able to access easily the various programs, projects and services being provided by the government.

Christianne Suguitan, provincial agrarian reform program officer of DAR-Ilocos Sur, said “The IDs will ensure the inclusion of our farmers in any of the Social Amelioration Programs from other government agencies aside from DAR.”

Suguitan said that DAR handed out IDs to ARBs who have been issued with registered emancipation patents and to those who were awarded with individual or collective certificates of land ownership award from 2016 to 2020.

DAR-Ilocos Sur has also assisted ARBs in the province by marketing their fresh harvests to the Bureau of Jail Management and Penology (BJMP) for the supply of food items for persons deprived of liberty (PDLs) under its custody.

She added that four agrarian reform beneficiaries’ organizations have sold their products to BJMP in Candon City for the food requirements of PDLs.

“We expect the rest of the BJMP units in the province to follow suit kasi tumatawag na sila for orders,”she said.

The Network Briefing airs daily from 8:00 a.m. to 9:00 a.m. at Radyo Pilipinas hosted by Presidential Communications Operations Office Secretary Martin Andanar and can be viewed at the Philippine Information Agency’s regional and provincial Facebook pages around the country.

Aside from the above assistance rendered to farmers in Ilocos Sur, DAR employees also continue to provide financial assistance to contractual and job order employees who are not health workers but are on the front line against COVID-19 in the province.

The same assistance, donated by DAR-Ilocos Sur employees, was given earlier to 18 employees of the Provincial Health Office and since they have targeted 100 recipients, they will also give aid for employees in a health facility in Magsingal town.