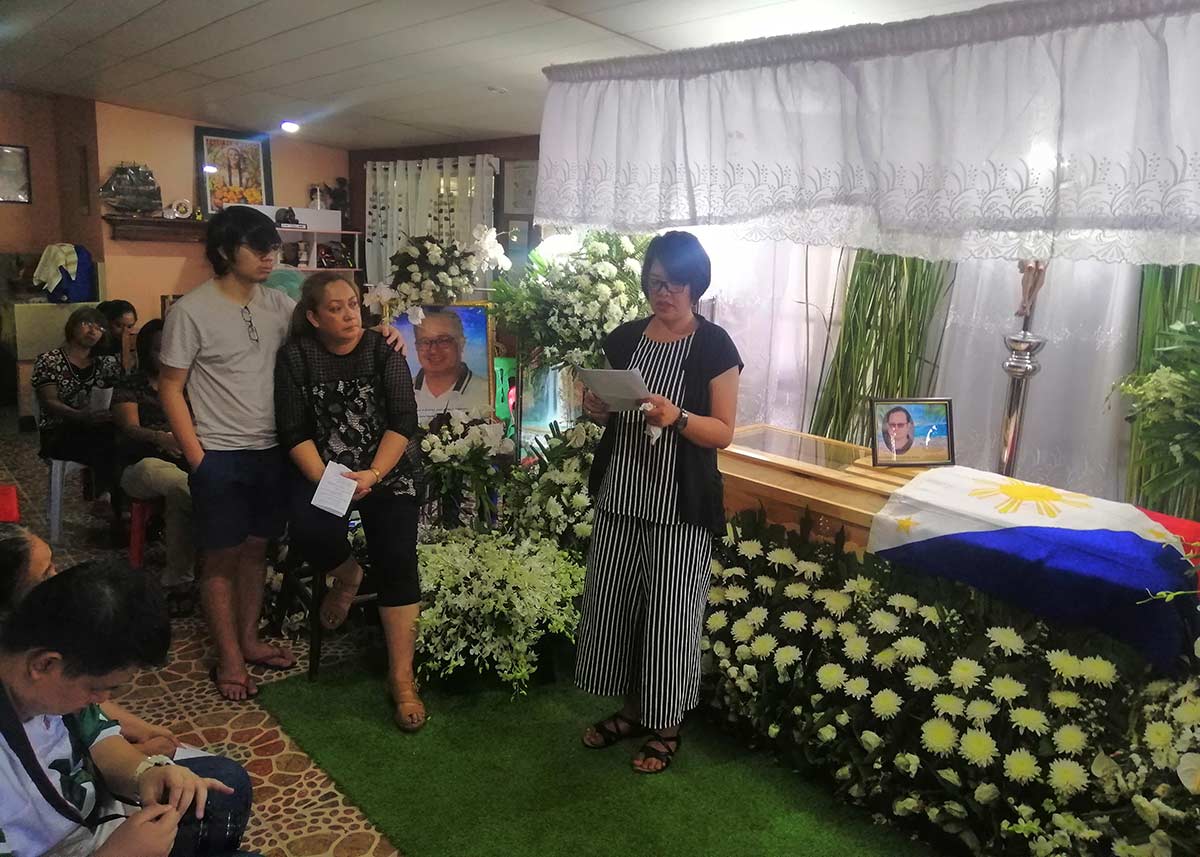 The Bañezes expressed this wish during the tribute organized by non-government organizations from the Cordillera and Ilocos on November 11 at the victim’s wake.

“Even though he died this way, at least we know he died for a cause, for truth and justice,” said Lumina Bañez, mother of the slain magistrate.

The 91year-old Bañez said the death of her son should challenge the people to seek justice and resolution to spate the killings, especially to the members of the judiciary.

Meanwhile, the late judge’s son, Darryl Lance, said that despite the pain the family is now bearing, the love and respect contained in the messages they are receiving from the people give them comfort.

According to him, Bañez loved the people and the job that, despite being aware of the dangers, the judge gave primacy to fairness in his decisions.

Darryl Lance said that good people like his father live forever, that he sees his dad “live in everyone who fights for justice.”

He wished that his father’s sacrifice would move others “to love, to believe in justice, to believe in goodness and to share it to those who are in need” with emphasis on those “suffering injustices in this world.”

Darryl Lance earlier posted on his Facebook that his father was “killed under this regime that sows terror to those who believe in justice.”

Gunmen ambushed and killed Bañez, who presided over RTC Branch 25 in Tagudin, on November 5. He was driving his Hyundai Accent on his way home when the shooting happened in Brgy. Mameltac, San Fernando City, La Union. He is the sixth murdered judge and the 43rd man of law killed under the Duterte administration.

Bañez’s youngest son, Alexei, shared that his father’s passing has yet to sink in, noting that he has not cried since he learned of the incident.

“Hanggang ngayon hindi ko pa matanggap,” he said, adding that Sunday before the fatal shooting; the family went out and ate together.

His dad, according to him, promised to attend his graduation.

Alexei said the family is aware of the risk of Bañez’s work, “lalo ngayon na maraming tinatarget na member ng judiciary” but said he did not expect that his dad would die in the same manner.

Other than the judiciary, Bañez was also a respected member of the community, both in San Fernando City where he resides and in his hometown Tadian in Mountain Province.

His colleague in the Saint Louis Credit Cooperative Board of Directors Emmanuel Juquiana said the murdered magistrate was “not only concerned with the judiciary but also (provided) service to the people, especially the poor and marginalized.”

He explained that despite having a busy schedule, the judge always made time to tend his responsibilities in the cooperative where he served as board chairman for many years.

Juquiana also thank the Bañez’s wife and children for “sharing and allowing the judge to serve the cooperative and its members.”

Meanwhile, the Municipality of Tadian expressed their grief and condemnation of the incident through a municipal resolution.

“Judge Mario Anacleto Marrero Bañez is a distinguished member of the municipality of Tadian. His unlawful, premeditated killing deprived our community of a living role model whose life is worthy of respect, admiration and emulation,” the resolution said.

Tadian officials also urged “all law enforcement agencies to bring the perpetrators of the crime to justice.”