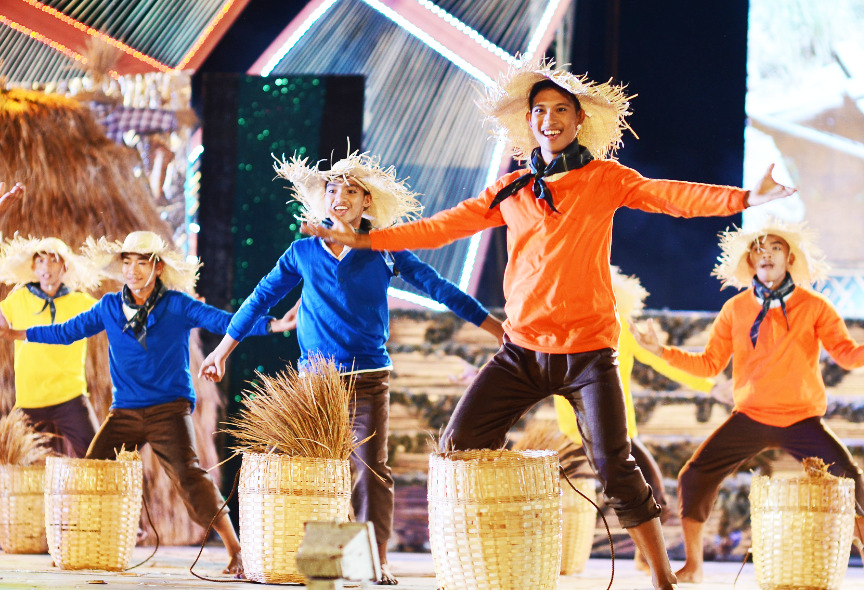 "TAN-OK NI ILOCANO FESTIVAL OF FESTIVALS" CHAMPION. Dingras wins the grand prize in this year’s "Tan-ok ni Ilocano Festival of Festivals” held at the Ferdinand E. Marcos Memorial Stadium on November 26 with an inspiring portrayal of the resiliency of the Ilocano spirit even in disasters and tragedy. (Photo by PGIN/CMO
by Radz B. Bismonte, Mizpah Grace G. Castro, and Jennifer T. Pambid, PGIN-CMOPosted on November 28, 2016February 4, 2019

In topping the competition and the P350,000.00 cash prize and grand trophy, Dingras’ Ani or Harvest Festival put on an inspiring portrayal of the resiliency of the Ilocano spirit as it perseveres through recent disasters and showcased the humble and strenuous yet happy lives of farmers, who earned their town the title of “Rice Granary of the North.”

Audiences that jampacked the Ferdinand E. Marcos Memorial Stadium cheered as the performers brought their prided crop onstage through a recreated rice thresher and mill showering grains of rice symbolizing their bountiful harvest after months of toiling in the fields.

Second place went to last year’s champion, Currimao’s Daklisan Festival with a presentation that audiences described as having transported them underwater. For the feat, Currimao went home with the P250,000.00 cash prize.

For the minor awards, Best Production Design was given to Dingras; Best Video went to Dumalneg’s ”Panagwawagi” Festival; Best Music was awarded to Nueva Era.

Aianree Raquel, head of the Ilocos Norte Tourism Office (INTO), said that this year’s “Tan-ok ni Ilocano Festival of Festivals” was held not only to uphold Ilocano heritage and positive values among the communities in the province but also to raise funds for disaster relief operations.

This year’s competition retains the incorporation of a video presentation in each performance to further challenge contingents, provide the audience with a different dimension to the spectacle, and also allow digital artists to partake in a show with largely traditional components.

The INTO also added two more seats to the usual group of seven judges mainly composed of performers, choreographers, art directors, and production designers to give a new perspective to the performances’ evaluation.

“Truly, culture and heritage mean so much to every Ilocano, to every town that would like to tell its story. Story-telling indeed is what we can do, telling and sharing with the world the extraordinary stories of Ilocos, the province and the Ilocano, that great nation that spans the globe,” Gov. Marcos said. (With reports by Radz B. Bismonte, Mizpah Grace G. Castro, and Jennifer T. Pambid, PGIN-CMO)