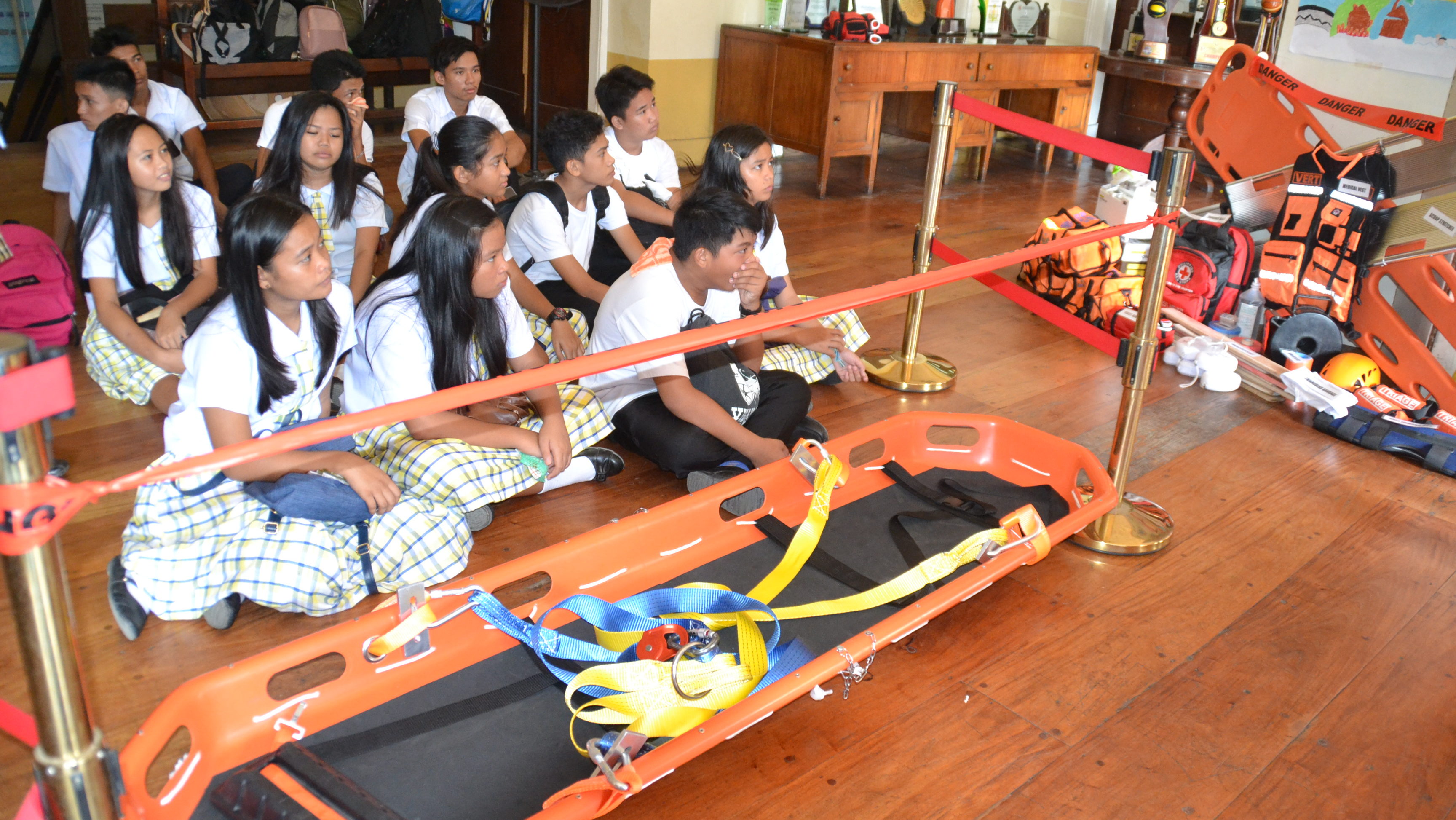 VIGAN CITY — Children are the best learners. Teach them today and they will carry this knowledge or skill for the rest of their lives.

“It is best to start them young on disaster preparation, so the city government is teaching Bigueño youth how to be disaster-resilient not only during the celebration of National Disaster Resilience Month in July, but all throughout the twelve months of the year,” said Milagros Alquiza, the City Disaster Risk Reduction and Management Officer, citing the disaster equipment exhibit at the city hall on July 1 to 5.

“We have placed our DRRM staff here to give lectures to our youth on the use of the many equipment and gadgets and even the vehicles and tents that the city government bought for the city,” she said.

“The children learn basic first aid with the use of the white bandana, what are inside the ambulance, the use of the rescue vehicles, evacuation tents,” said Kenneth Rabago of the CDRRMO. The children have the chance to get inside the ambulance and learn about the oxygen supply equipment, suction apparatus with regulator, pulse oximeter, sphygmomanometer, nebulizer, transcutaneous cardiac pacemaker, and the automated external defribillator,” said Rabago. “This way they are prepared in cases of emergencies during disasters and accidents.”

The posters on disaster resilience created by 15 students displayed with the equipment at the city hall lobby show how our children are preparing themselves for disasters.

Although the exhibit at the city hall hass ended, other activities go on in various schools of the city.

The Philippine Red Cross Ilocos Sur Chapter, the Bureau of Fire Protection of Vigan City help the CDRRMO in conducting trainings in basic life support, hands-only cardio-pulmonary resuscitation, fire prevention and control using a fire extinguisher, buckets of water, and helping rescue teams, in the schools of the city all throughout the year.

The Provincial Disaster Risk Reduction and Management Office started on July 8 an exhibit of rescue equipment, and a first aid booth in front of the Capitol in this city, as mentioned by PDRRMO Michael Chan during the Dap-ayan Ilocos Sur media forum conducted by the Philippine Information Agency Ilocos Sur on July 4.

A rappelling wall was also be built to train residents to go up walls in cases of fire and other disasters.

A motorcade of rescue vehicles of about 30 towns and cities of the province was led by the PDRRMO on July 5 to kick off the province’s celebration of National Disaster Resilience Month.

They started in Sinait, the northernmost town, and went through Metro Vigan until Tagudin, the southernmost town, covering 18 towns and two cities. ●