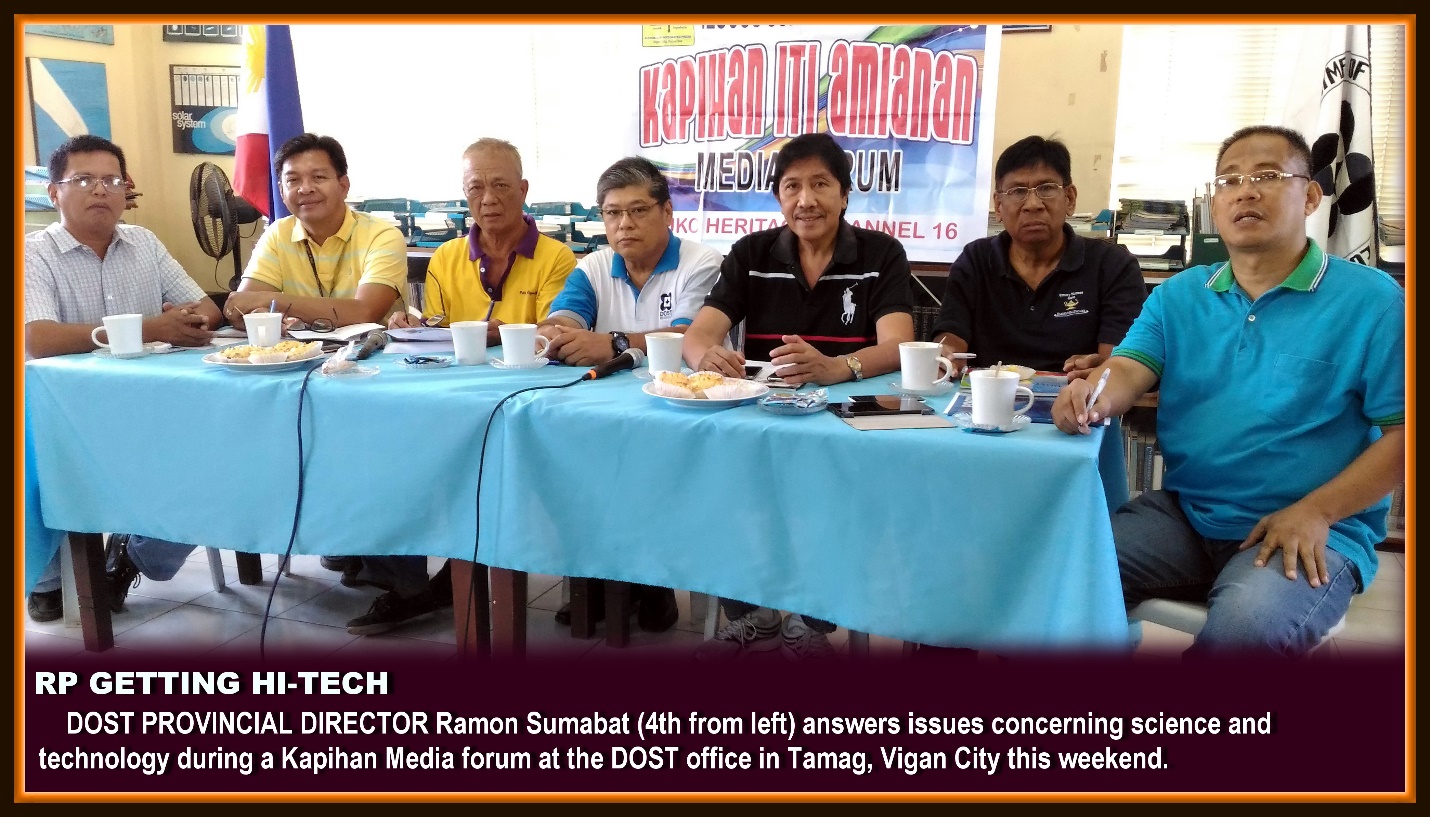 VIGAN CITY – We are getting hi-tech.

The Department of Science and Technology (DOST) through DOST Provincial Director Ramon Sumabat said the country is right on its track to becoming at par with other South East Asian countries when it comes to the improvement of science and technology.

“We are about to launch our second micro-satellite that will greatly improve our communications. For the last 3 to 4 years, we have updated our technology in disaster and calamity preparation, medical and agriculture sectors and in ICT, and our research and development institutes are continually developing new technologies,” he said during a Kapihan Iti Amianan interview at the DOST here in Barangay Tamag this weekened.

He also cited that the PAGASA (Philippine Atmospheric, Geophysical and Astronomical Services Administration) based in Tapao, Sinait, has received big funding to update its equipment and is beefed up by the deployment of solar-powered “Early Warning Device” gadgets which are automatic water level systems that serve as auto-rain gauges placed in bridges to serve as warning for impending landslides or floods.

“These gadgets transmit information to the national PAGASA weather bureau which, in turn, will officially declare the weather situation and the latest weather bulletin in the locality,” he said.
He lamented, however, the lack of PAGASA personnel as many of them are migrating abroad for “greener pastures.”

“We cannot prevent them from going abroad that’s why the DOST has its continuous scholarship program to train ‘back-ups’ in case situations like this occur. It is the goal of the DOST to train at least 400 Computer Numerically-Controlled System Technicians annually who will work in the metal industry and where computers are used in the manufacture of airplane spare parts — which we are now engaged,” he said.

On the query why a gadget has not been discovered to predict the coming of an earthquake, he said that no invention has been made to date, probably because unlike in weather forecast where a tropical disturbance is visible, earthquakes are caused by plate movements. He also said that typhoons are pre-named that’s why once a typhoon is sighted entering the Philippine Area of Responsibility, it already has a ready name.

In medical technology, the DOST, he said, is about to distribute 1000 medical gadgets throughout the country called “Rx Box”, a cellphone-like gadget that can monitor blood pressure and other vital signs and can be used as ECG gadget.

“This hi-tech gadget would be very useful in remote barangays and can be used to consult a doctor in real time,” he said.

“For those which receive no DOST funds, they can always request for funding and we can always endorse these requests to our higher authorities for consideration,” he said.

He also announced the holding of the DOST’s Science and Technology Caravan at the Sinait National High School on May 9-11, 2018. The caravan seeks to help farmers; Micro, Small and Medium Enterprises (MSMEs); bamboo weavers; salt producers; food handlers and manufacturers and the general public on their problems of production, manufacturing technology, product preservation, testing and calibration and technical problems.

PHOTO CREDIT: By Edward B. Antonio