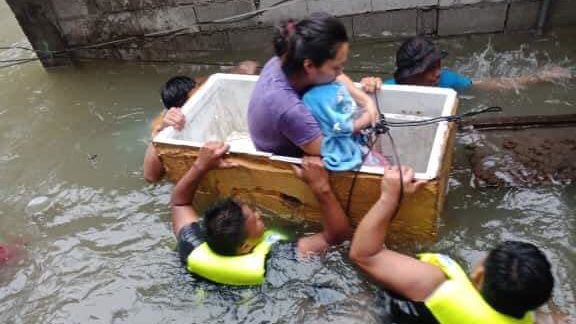 LAOAC CITY — The Provincial Disaster Risk Reduction and Management Council (PDRRMRC) and other frontline offices of the Provincial Government of Ilocos Norte (PGIN) this morning, August 24, ensured that relief supplies and rescue equipment are being utilized in ongoing rescue operations, in light of Severe Tropical Storm “Ineng.”

The Severe Tropical Storm Ineng (International Name: Bailu) battered Ilocos Norte with heavy rains causing some areas to suffer from critical levels of floods and landslide that resulted to some roads being impassable.

A total of 1,750 relief packs containing rice and canned goods have already been stored in seven sites through the Provincial Social Welfare and Development Office (PSWDO), concentrating on northern towns as they are expected to be the hardest hit by the tropical storm.

PSWDO Head Mrs. Lilian Rin also reminds residents of the “lola watch,” urging neighbors and families to look out for vulnerable members of their communities.

As of now, several rescue vehicles are stationed at the Provincial Capitol, including one ambulance, three payloaders, one backhoe, and two rubber boats.

Even with relief and rescue apparatus prepared, Governor Matthew Marcos Manotoc has encouraged residents to stay home and avoid going out if necessary. Those living in areas identified to be highly or very highly susceptible to floods and rain-induced landslides are advised to take precautionary measures.

The PDRRMC, frontline offices of the PGIN, and the Sangguniang Panlalawigan convened this afternoon for an emergency session regarding the situation.