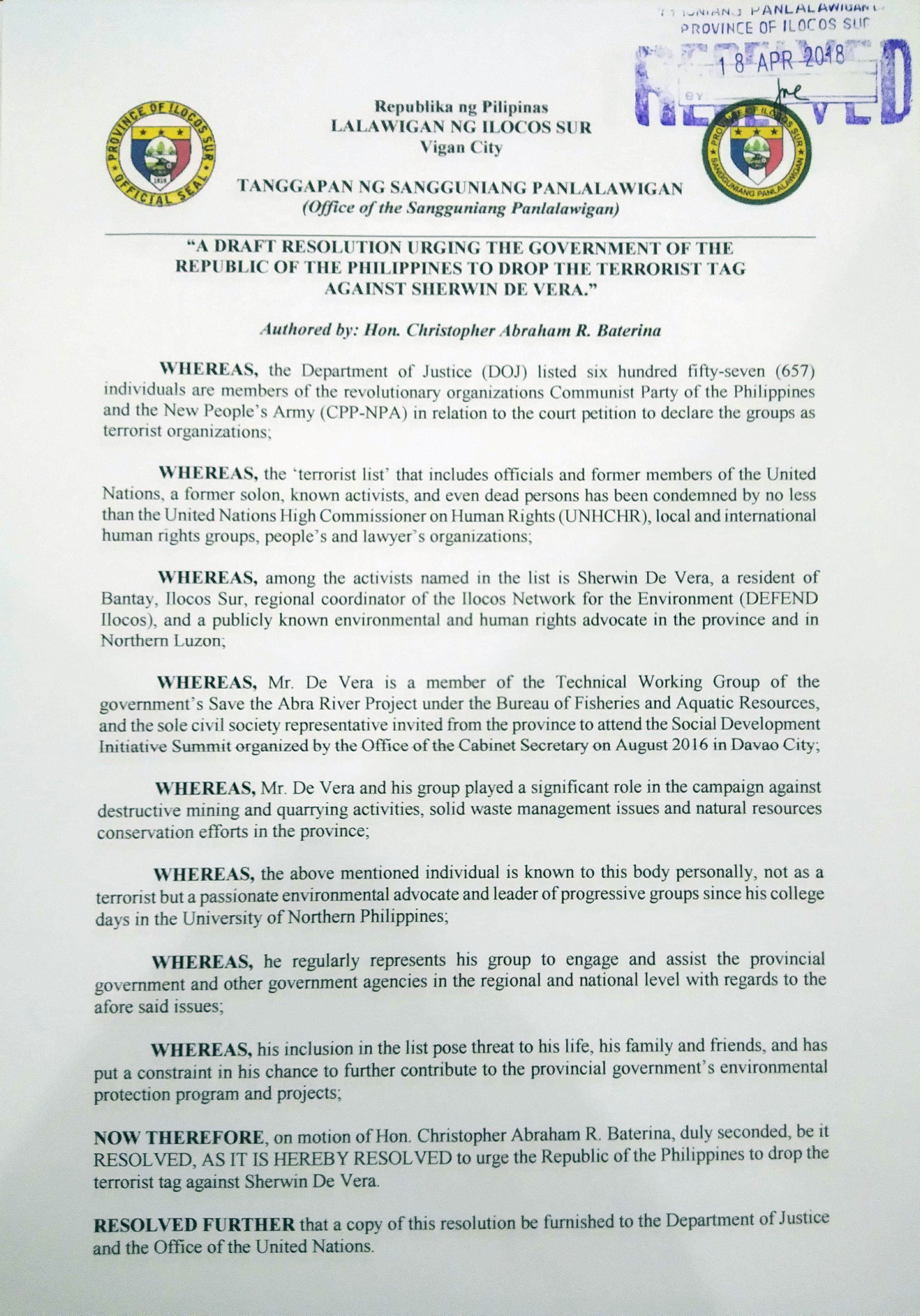 VIGAN CITY – The environmental group DEFEND Ilocos (Ilocos Network for the Environment) released a statement yesterday commending the Provincial Board of Ilocos Sur for passing a resolution on November 27, 2018, supporting the organization’s regional coordinator, Sherwin de Vera, against the “malicious terrorist-tagging of the Department of Justice.”

Sherwin de Vera, who is known for his advocacy work in environmental protection and human rights in Northern Luzon, made national news in December last year for being the first reported activist to be arrested on rebellion charges after President Rodrigo Duterte signed Proclamation No. 374 declaring the Communist Party of the Philippines (CPP) and New People’s Army (NPA) as terrorist groups.

He was released on bail in January this year but in February this same year, his name was again included in a list of over 600 suspected communist leaders compiled by the Department of Justice (DOJ) as part of a petition asking the Manila Regional Trial Court to declare the CPP and NPA as terrorist organizations.

The DOJ’s list was heavily criticized for including a United Nations special rapporteur, activists and former lawmakers among those the department wanted tagged as “terrorists.” The DOJ later admitted that they did not conduct independent verification of the supposed connection of the people in their list with the CPP.

According to an email message by DEFEND Ilocos, the Sangguniang Panlalawigan passed without amendments a draft resolution urging the Philippine government to drop the terrorist tag against Sherwin de Vera.

SPM Christopher Baterina filed the resolution in April this year and SPM Atty. Pablito Sanidad, Jr. endorsed it as chair of the Committee on Human Rights.

A copy of the draft resolution accompanying the press release revealed the Provincial Board citing the significant role that de Vera and his organization played in the campaign against destructive mining and quarrying activities, solid waste management issues and natural resources conservation efforts in the province.

The board also cited de Vera’s work for the government as member of the Technical Working Group of the Save the Abra River Project under the Bureau of Fisheries and Aquatic Resources, as well as his being the sole representative from the province in the Social Development Initiative Summit organized by the Office of the Cabinet Secretary on August 2016.

In the press statement, DEFEND Ilocos expressed the group’s gratitude for the passage of the resolution; however, the group emphasized its continuing “concern for the safety of Sherwin and other members of our network.”

The group claimed that de Vera’s name was included by the Philippine National Police Intelligence Department among the list of “New People’s Army leaders” that police operatives must monitor and submit an updated “target profile.”

The group urged the board to pass measures protecting human rights defenders and for the police and military to be more prudent in their accusations against activists so as not to put their lives and that of their families in danger. (Tawid News Team)