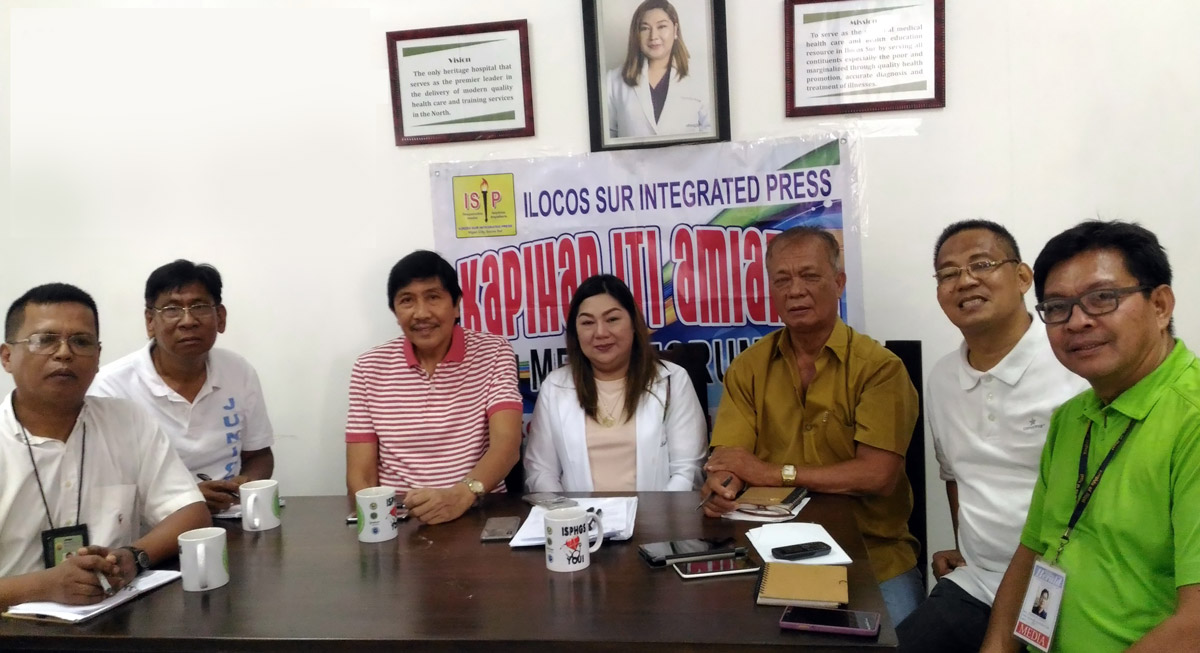 VIGAN CITY – We are ready to serve anybody, anytime.

This seems to be the adage of Ilocos Sur Provincial Hospital-Gabriela Silang (ISPHGS) Chief Trina Tabbuga Talaga as she enumerated the various modernization programs that the hospital has made to better serve the people during a one-hour press conference with the Ilocos Sur Integrated Press (ISIP) over the weekend for its weekly TV program “Kapihan Iti Amianan Media Forum.”

“Aside from our X-Ray, MRI, CT scan, ultrasound, endoscopy and neurosurgery services, we now have mammogram, EEG for them brain and newborn screening equipment. We also have a laboratory for tumor markers and thyroid test; our emergency room is also open 24 hours with 6 to 7 doctors deployed at a time, so I think our hospital is a good alternative compared to private hospitals” she said.

She also announced that the ISGHGS through the provincial government, has been licensed by the Blood Bank as the only blood bank in the province to supply blood for the province, a major service by the ISPHGS.

“Gov. Ryan Luis Singson is most supportive that’s why it’s also our goal to move from a Level 2 to a Level 3 hospital where we dream to become a medical center with more doctors and specialists, and we are targeting this at the end of the year, hoping we can cope up with all the requirements,” she said.

In infrastructure, she said that a 5-storey medical arts building worth P67 million will rise soon with private rooms and medical laboratories for cardio-pulmonary diseases and dialysis.

She admitted, however, that the hospital has been losing due to its no-balance billing policy particularly to indigent patients.

“We incurred a P14 million loss in 2014 and has ballooned to P70 million in terms of services, products, medicines and supplies that’s why in the building to be constructed, there will be private rooms. These will somehow alleviate our losses” she said.

On the issue that many indigents don’t have PhilHealth, she said that indigents can enroll in point of service or enroll through the computer online where they will be nationally funded in the hospital’s no-balance billing program.

“They can also be referred to the DSWD which can help up to P20,000 or be endorsed to the PCSO. In this case, they can just request Governor Ryan Singson for guarantee letters and we will be the one to wait for the payments,” she said.

On the HIV-AIDS and dengue problems in the province, the said dengue at this time is not yet rattling but she expects dengue patients to be coming in in the coming weeks.

“We hope dengue won’t be alarming as last year. As for AIDS, our hospital is preparing to be an HIV treatment hub with new protocols and new isolation rooms. However, we don’t talk about the cases of HIV-AIDS here because of our confidentiality policy,” she said.

Asked if the hospital has problems on doctors, she said that the problem the hospital is facing now is not the lack of doctors but nurses since a lot of nurses are now going abroad that’s why ISGHGS nurses sometimes have to work overtime or do multiple jobs.

“I don’t go well with food supplements; all we need to do is to have a healthy lifestyle and eat a lot of fruits and vegetables where we can get all the nutrition that we need. As to herbal medicines, I have a lot of respect to them. The world of medicine started from them,” she said. (EDWARD B. ANTONIO)