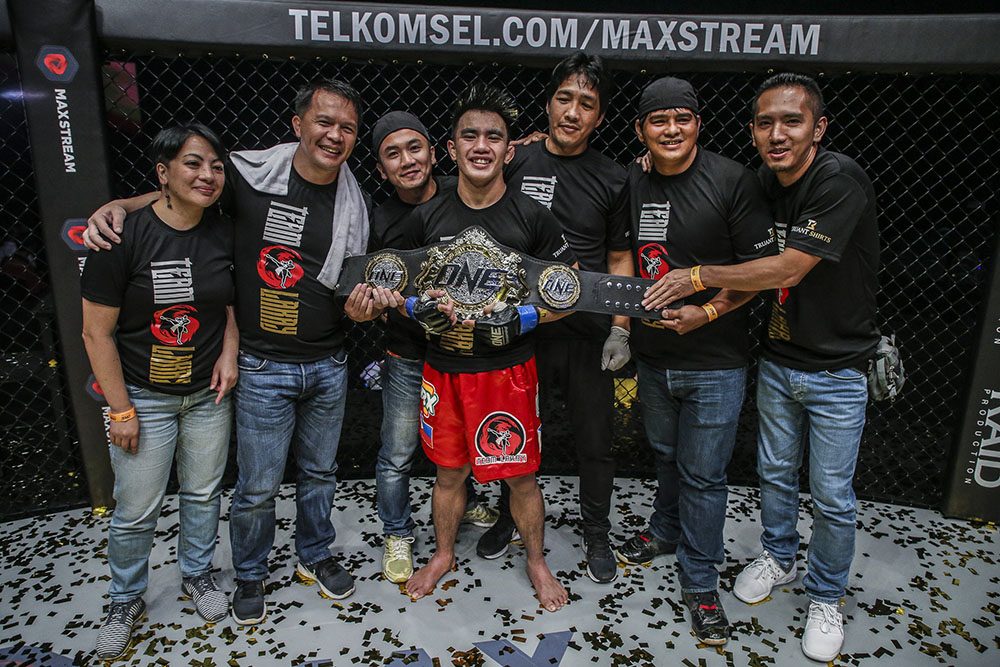 JAKARTA, Indonesia – The largest global sports media property in Asian history, ONE Championship™ (ONE), held another unforgettable evening last September 22, 2018 in Indonesia’s bustling capital city of Jakarta, featuring the best and the brightest in the constantly-expanding world of martial arts. ONE: CONQUEST OF HEROES sent shockwaves of excitement through the packed Jakarta Convention Center as the card featured a series of compelling bouts, punctuated by a highly-anticipated championship rematch. In the main event, Joshua Pacio of the Philippines defeated grappling wizard Yoshitaka Naito of Japan to be crowned the new ONE Strawweight World Champion.

In the main event of ONE: CONQUEST OF HEROES, Joshua “The Passion” Pacio of the Philippines fully realized his dream to become a world champion in the sport of mixed martial arts, dethroning Japanese rival Yoshitaka “Nobita” Naito. Pacio clinched a unanimous decision in their rematch to capture the ONE Strawweight World Championship. Naito showcased his overwhelming grappling skills to consistently bring Pacio to the ground, controlling the action on the canvas late in the contest. Although Naito managed to showcase his wrestling, it was Pacio who showed striking superiority for the majority of the bout. Pacio repeatedly connected on Naito with crisp, clean combinations throughout the championship contest while exhibiting solid takedown and grappling defense. In the end, all three judges saw the bout in favor of Pacio to win by unanimous decision.

Joshua Pacio stated: “I’m speechless, but I want to thank the Lord Jesus Christ, and ONE Championship for the privilege and this unexplainable feeling. Last week, typhoons struck Baguio City, Benguet, and the Cordilleras. A lot of places were hit hard. Many people died and some are still missing. This is for all of them. I know that the Cordilleras will come back and rise again soon as one. Of course, I would like to thank my coach Mark Sangiao, who is here, and all our coaches, friends and sponsors. They had our back since day one. I tried to counter his (Naito’s) takedowns and grappling, but this guy is a legend. He was so tough.”

In the co-main event of the evening, Chinese grappler Peng Xue Wen silenced the Indonesian crowd after defeating hometown favorite Stefer Rahardian via unanimous decision. The former Chinese wrestling champion flaunted a different dimension in his expanding skill set as he picked Rahardian apart in the striking department. Peng’s superb takedown defense was also a major key as he claimed a crucial victory after an action-packed three-round affair.

Thai kickboxing superstar Rodtang Jitmuangnon announced his arrival to the heavily-acclaimed ONE Super Series in astounding fashion, clinching a unanimous decision victory over former ONE World Title challenger Sergio “Little One” Wielzen of the Netherlands. Rodtang wowed the fans in Jakarta as he unloaded a torrent of punches and kicks to outclass Wielzen from bell to bell. The dominant performance earned Rodtang the unanimous decision win after three rounds.

In a battle between two outstanding flyweights, Danny “The King” Kingad of the Philippines overcame a spirited effort from Japanese newcomer Yuya “Little Piranha” Wakamatsu, earning a unanimous decision. Kingad was in trouble for the majority of the opening round after being tagged by Wakamatsu’s hard right straight and a follow-up knee strike. Avoiding further danger in the stand-up exchanges, Kingad resorted to his wrestling in the succeeding rounds where he found his leverage by shooting for high-impact takedowns and threatening with various submissions. In the end, the three cageside judges awarded the victory to Kingad unanimously.

Japanese knockout artist Koyomi Matsushima left a lasting impression in his ONE Championship debut, scoring a huge victory at the expense of former ONE Featherweight World Champion Marat “Cobra” Gafurov of Russia. Matsushima caught Gafurov with a stunning right cross that landed square on the Russian’s chin in the first round. As Gafurov dropped to the canvas, Matsushima poured down a volley of follow-up strikes to secure the finish. The victory earned Matsushima the GoDaddy KO of the Night honors.

Turkish lightweight contender Saygid Guseyn Arslanaliev brought the crowd to its feet after making quick work of Russian dynamo Timofey Nastyukhin with a scintillating knockout victory in the first round. Arslanaliev weathered Nastyukhin’s early striking onslaught as his opponent came out with a lot of power behind his shots. The tide dramatically turned into Arslanaliev’s favor moments later, after he caught a kick and tripped Nastyukhin to the ground before finishing the bout with a series of piston-like punches for the knockout.

Former ONE Flyweight World Champion Kairat Akhmetov of Kazakhstan returned to his winning form, dominating Chinese phenom “The Southern Eagle” Ma Hao Bin to earn a unanimous decision victory. It did not take long for Akhmetov to showcase his elite grappling prowess, emphatically taking Ma down and imposing his will on the ground. Ma simply had no answers for his opponent’s world-class wrestling as Akhmetov cruised to victory after three rounds of action.

Indonesia’s Priscilla Hertati Lumban Gaol reinserted her name into the winner’s column, clinching a unanimous decision win over previously-unbeaten Filipina standout Jomary Torres. Driven to redeem herself in front of her countrymen, Lumban Gaol shrugged the cobwebs off of her lackluster start in the early going, stopping every takedown attempt from Torres in the second and third rounds. Easily outmaneuvering Torres at every turn, Lumban Gaol kept Torres on the receiving end of thudding knee strikes, which steered her to a convincing victory.

In a ONE Super Series Muay Thai bantamweight contest, French Guiana’s Fabrice Fairtex Delannon scored his first victory since joining ONE Championship last June, coming away with a razor-thin split decision over Muay Thai star Yodpanomrung Jitmuangnon of Thailand. The two warriors traded powerful striking combinations over the course of three rounds, but it was Delannon who focused on doing more damage. In the end, two of the three judges scored in favor of Delannon to take home the win.

Local martial arts veteran “The Terminator” Sunoto put together an inspiring performance, finishing opponent Victorio “Indra” Senduk with a slick submission in the second round. After dominating the first round with his wrestling, Sunoto entered the second looking to finish. Although Senduk tried his best to defend against Sunoto’s advances, he had no answer for the veteran’s superior grappling. Towards the end of the second frame, Sunoto took Senduk’s back and latched on the rear naked choke to force the tap.

Local martial arts star Adrian “Papua Badboy” Mattheis turned in a spectacular performance to place himself back in the winner’s circle, stopping countryman Angelo “The Unicorn King” Bimoadji in the first round of a scheduled three-round strawweight contest. After a brief grappling exchange, the two men found themselves back on their feet trading strikes. Mattheis then unloaded a left hook, uppercut combination to end matters midway through the opening frame. Referee Yuji Shimada had no choice but to call a halt to the contest after Bimoadji was out on his feet.

Kicking off the action at ONE: CONQUEST OF HEROES were local stars Egi Rozten and Riski “King Kong” Umar. The two figured in a back-and-forth striking contest to set the tone for what would be an exciting night of world-class martial arts action. In the end, Rozten continued his rise through the ranks and scored yet another scintillating finish, stopping Umar in the third round with strikes.

Official results for ONE: CONQUEST OF HEROES