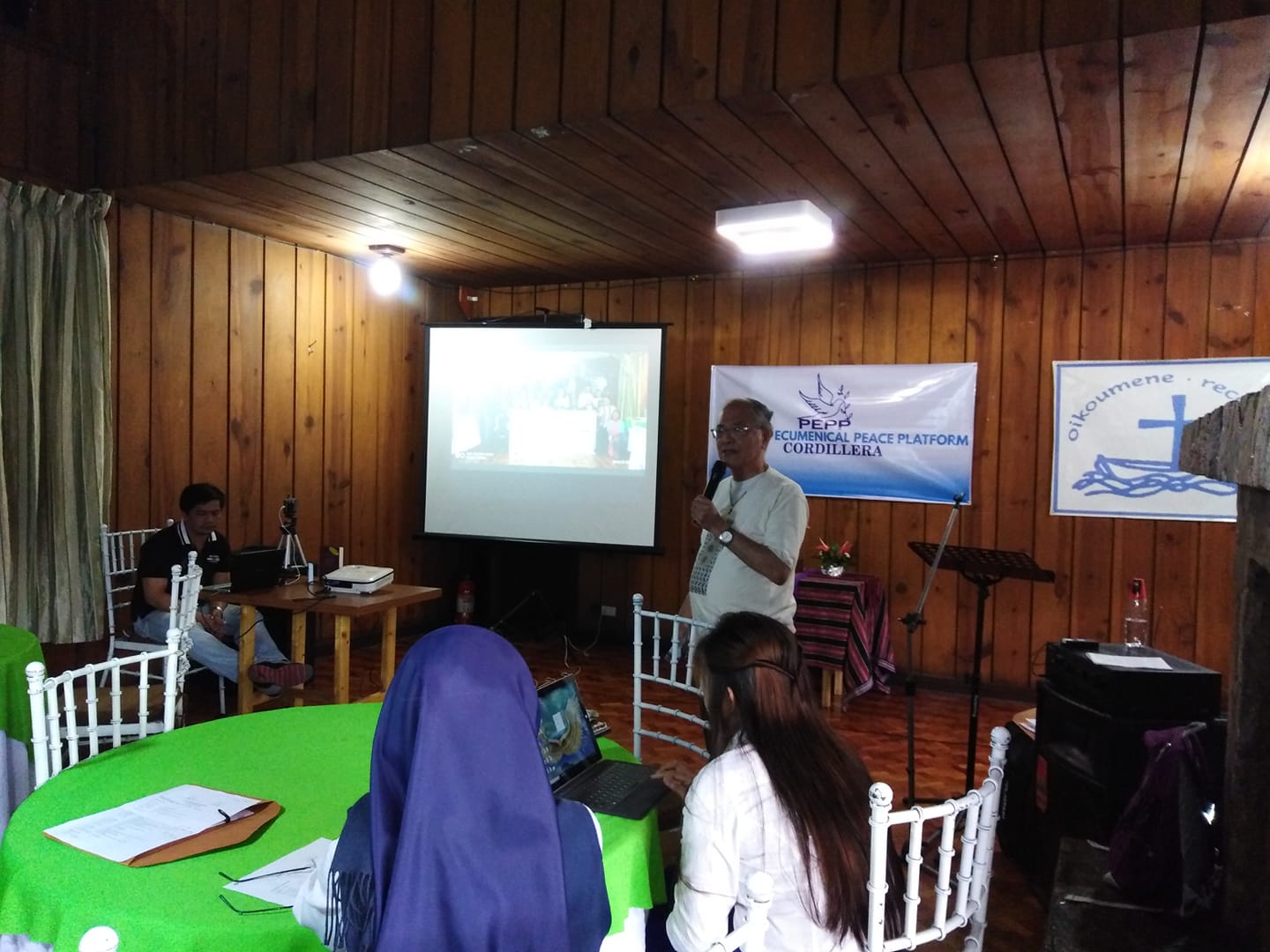 Bp. Deogracias Iñiguez, head of the PEPP secretariat, shares the genesis and objectives of the organization during the launching of the PEPP Cordillera.
by Sherwin de VeraPosted on September 3, 2018September 30, 2019

“They should know that it must be taken as part of the negotiations at the national level,” said the prelate in mixed Filipino and English, adding that “peace is everyone’s responsibility, we are all responsible and play a role to achieve peace.”

He sees localized negotiations as a means to promote and discuss the overall agenda of the talks and the proposals of both parties to the wider public.

“The more are involved in the talks, the better,” Iñiguez said.

However, Iñiguez stressed that local peace talks must not undermine top-level negotiations undertaken by the designated peace panels of the national government and the NDFP.

He said forces of both sides in the local level can talk over specific concerns and relay these matters to their respective panels. On the other hand, “those who are on the top can give pointers” to their people on the ground what to discuss.

In the same event, NDFP consultant Randy Malayao clarified that NDFP forces can engage local officials on local concerns of the people “but larger social and economic concerns are addressed at the national level.”

He explained that continuing foreign intervention in the economic and political affairs; the century-old feudal exploitation; and bureaucrats who run the government like business fuel the armed conflict in the country, noting that local talks cannot address these matters.

The NDFP consultant also pointed that despite the government’s promotion of local negotiations last year, no regional or provincial unit of the CPP and NPA have engaged the government.

Malayao is a member of the NDFP’s Technical Working Group on Political and Constitutional Reforms.

The group alleges that the government’s aim and design in holding local talks are to bypass the authorized representatives of the NDFP to negotiate peace and usher the surrender of rebellion without meaningful reforms.

He also expressed that President Rodrigo Duterte’s termination of the talks is a big setback “for PEPP’s desire for the peace process to prosper and have positive results.”

Despite the current state, Iñiguez expressed optimism the peace talks will resume and move forward “for the good of everybody” and hopes the negotiators “finish their agenda and come up with a favorable agreement.”

For the NDFP’s part, Malayao said they remain open to negotiation as long as the national government shows sincerity by upholding all previous agreements and refrain from imposing preconditions.

“President Duterte has not disbanded or dissolved the government panel, so we take that as a sign that resumption of talks is still possible,” he said.

Duterte terminated the negotiations last November through Proclamation No. 360, followed by Proclamation No. 347 in December designating the New People’s Army (NPA) and Communist Party of the Philippines (CPP) as ‘terrorist organizations.’ In response, Jose Maria Sison, the exiled founding chair of the CPP, said in June this year that it is more productive for the NDFP to take part in Duterte’s ouster than talk peace with his administration.

Iñiguez and Malayao were in the city for the launching of PEPP Cordillera spearheaded by the Regional Ecumenical Council in the Cordillera. The organizers said they invited members of the Philippine government panel through Secretary Silvestre Bello but they declined because of prior schedules. (Sherwin de Vera)