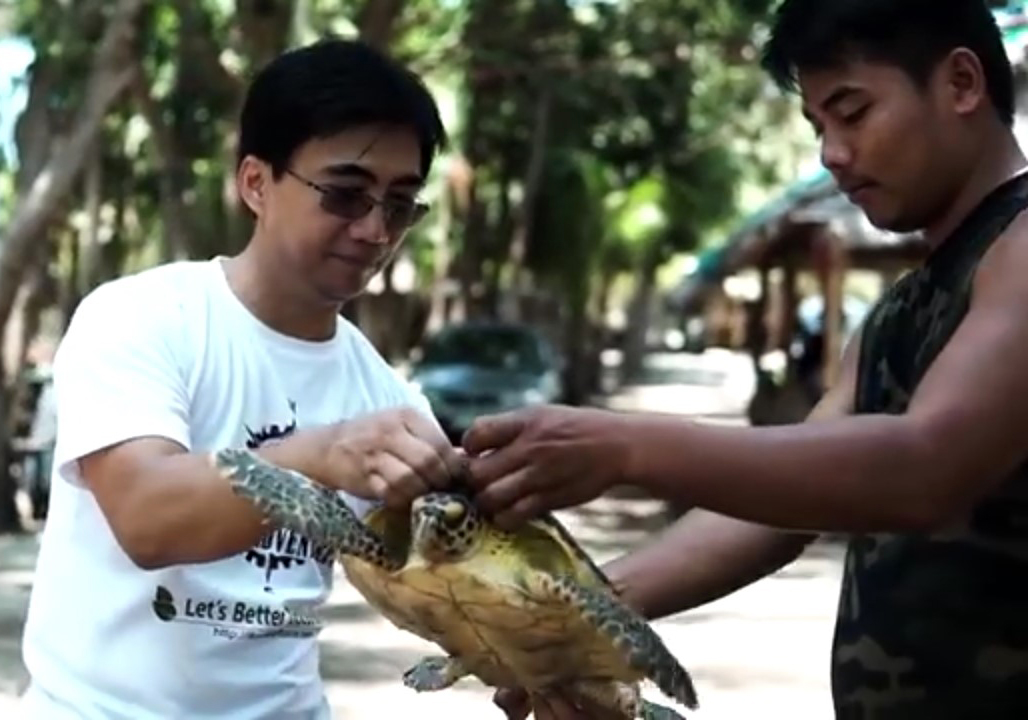 RARE SIGHTING. Most turtle sightings involve the green turtle but just this April, a fisherman from Surngit, San Juan town caught a hawksbill and turned it over to Baterina (in white shirt) who in turn informed the authorities. After measuring and tagging the turtle, authorities released it back to the sea. (photo from the Facebook page of SPM Baterina)
by Sherwin De Vera / Nordis.netPosted on June 24, 2019June 24, 2019

VIGAN CITY — In observance of the World Sea Turtle Day last June 16, Ilocos Sur Board Member Christopher Baterina urged his colleagues to work for a local program to protect and conserve the sea turtles (pawikan).

In his June 11 privilege speech, he raised the need for the province to “develop a marine turtle conservation and protection program that goes beyond the threat of imprisonment and fines.”

According to him, steps should include people’s education and information drive on the importance of the animal. Through this measure, he hopes to encourage people to release sea turtles caught accidentally, and report nesting sites and poachers.

“I am still thinking of the means to really encourage people to participate, we still have to study but one way would be to give incentives to the individuals who report nesting sites, accidentally caught pawikans, and poachers,” he said.

He added that barangays who will include steps to protect the sea turtles, especially the coastal villages identified as nesting sites should also receive support and incentives.

“Turtles might look cute, but they are actually important predators that help balance the ecosystem. Each sea turtle species uniquely affects the diversity, habitat and functionality of its environment. Whether by grazing on seagrass, controlling sponge distribution, feasting on jellyfish, transporting nutrients or supporting other marine life, sea turtles play vital roles in maintaining the health of our ocean,” he explained.

The legislator also eyes the potential of protecting and conserving marine turtles and their nesting sites in relation to the ecotourism program of the province.

“The sea turtles can even help us beyond their beneficial presence in our marine ecosystems. They can be a big attraction to tourism during their egg laying and hatching events,” he said.

Baterina also called on the activation of the Ilocos Sur Marine Turtle Conservatory Center, as contained in Provincial Ordinance No. 15-13 Series of 2015. However, he underscored the need to update and amend the ordinance “to conform and adapt to the latest data regarding sea turtles in the province.”

The ordinance, authored by Board Member Pablito Sanidad, Jr., aims to protect identified nesting sites of sea turtles in the province. The author said that his aim when he pushed for the legislation was to create a task force or a working group that will jump-start the operation of the center and campaign.

“Once set up, it would have been easy for the province to enter into agreement with non-government organizations or institutions for the continuity and resources,” explained Sanidad.

Sanidad said that because of the limited budget and not being a priority of the province at that time, the landmark ordinance for the pawikans never took off. But he clarified that they are taking steps to manage sustainably the marine resources in the province.

One of the most important nesting sites in Southeast Asia for sea green turtles is in the Philippines, at the Turtle Island Wildlife Sanctuary in Tawi-Tawi province.

Based on the red list of the International Union for Conservation of Nature, the hawksbill is under the critically endangered category, the green turtle as endangered, and the olive ridley and leatherback turtles are under vulnerable. The Wildlife Protection Act (RA 9147) provides for the conservation and protection of wildlife, including sea turtles, and their habitats. Violators of this law can be fined by as much as P300,000 and face a jail term for as long as four years.