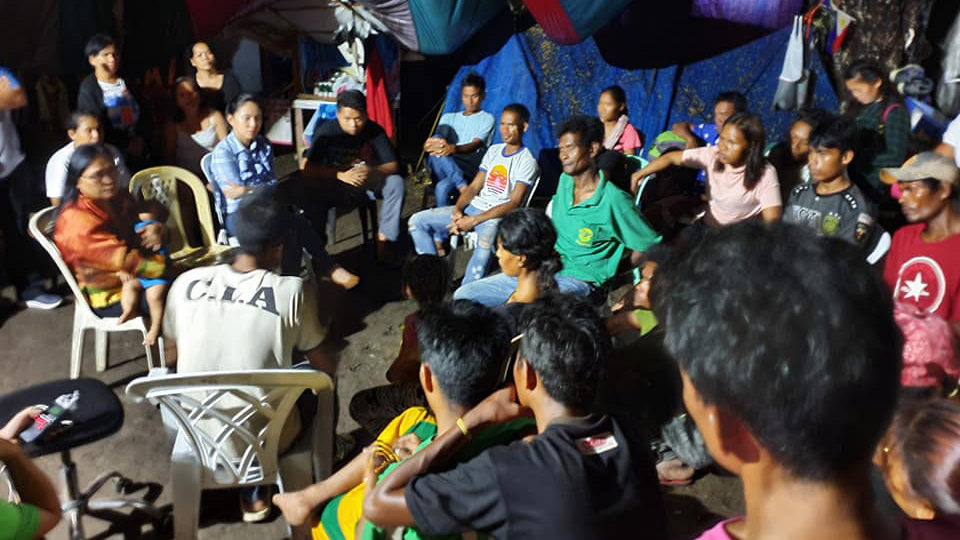 BAGUIO CITY — Thirty-two Lumads, including a couple with two kids, belonging to the Manobo-Pulangihon tribe of Quezon, Bukidnon escaped from their abusive employer in Sual, Pangasinan on June 30 according to a factsheet sent by the Unyon ng mga Manggawa sa Agrikultura (Agriculture Workers Union or UMA).

The group escaped in the middle of the night from the aquaculture farm of a certain Arian Hao, whom they described as a “very strict and despotic” landlord. They walked by the shore, bypassing four security guards. They chanced upon a bus passing by that allowed them to ride to Cubao without any money. UMA took responsibility and paid for their transport, and brought them Commission on Human Rights.

Based on the victims’ account provided by UMA, Danny Talisan, a fellow Lumad and Rizalinda de Felix from Pangasinan recruited them to work, promising P7,500 monthly pay with one month advance, and free food and housing.

However, the recruiters did not provide the one-month advance payment prior to their departure. De Felix, who accompanied them in their travel made repeated excuses until they arrived in Pangasinan, where they immediately worked in the aquaculture farm located in the open seas.

The Lumads worked as fish feeders and harvesters for almost two months. They tended two parcels of fish pens, covering about 100,000 square meters in the open seas. Every day, they harvest more than 19,000 kilos of bangus. They also doubled as loaders and cleaners. Work runs from 6:00 in the morning, under the heat of the midday sun and up to 7:00 in the evening.

Despite being exhausted, the victims said their supervisor, a sibling of their employer do not allow them to rest. Someone fetches them at nighttime and brings them to walled and guarded dwellings that require passes before anybody can leave the house. Rest can only come after they carried and finish loading 200 sacks of fishmeal for the following day. They also experienced physical abuse and many got sick from the miserable working conditions.

The owner only paid them P1,800 citing deductions for their food usually composed of one fried or boiled egg with three pieces of fried fish, and sometimes munggo. Worse, there are those reported not receiving any pay at all.

Prior to their departure from their work in Sual, the group asked for assistance to get out of their terrible situation. They coursed their plea through Organisasyon sa mga Yanong Obrero sa Bukidnon (OGYON), a local chapter of UMA. OGYON, in turn, informed and alerted UMA to help.

“They are forced by circumstances to leave their village, to look for better pay than the slave-like wages they are getting in Bukidnon,” he explained.

The UMA leader disclosed that the farmers are in a land dispute against the Montalvan estate who wants to lease their ancestral lands to pineapple plantations. Quezon Mayor Pablo Lorenzo owns part of the land, the Rancho Montalvan.

“They are also victims of forced surrender campaigns, rather than succumbing to military pressures, they took the offer to leave their militarized village without knowing what they are really going into,” Ka Tonying added.

He also called on the Department of Labor and Employment and National Bureau of Investigation must act at once to close down the illegal and exploitative operations of Hao and put him and his recruiters behind bars.

The Lumads are currently staying with the Sumifro workers from Mindanao. They are asking for any assistance raise P100,000 pesos for their fare back to Bukidnon. ●