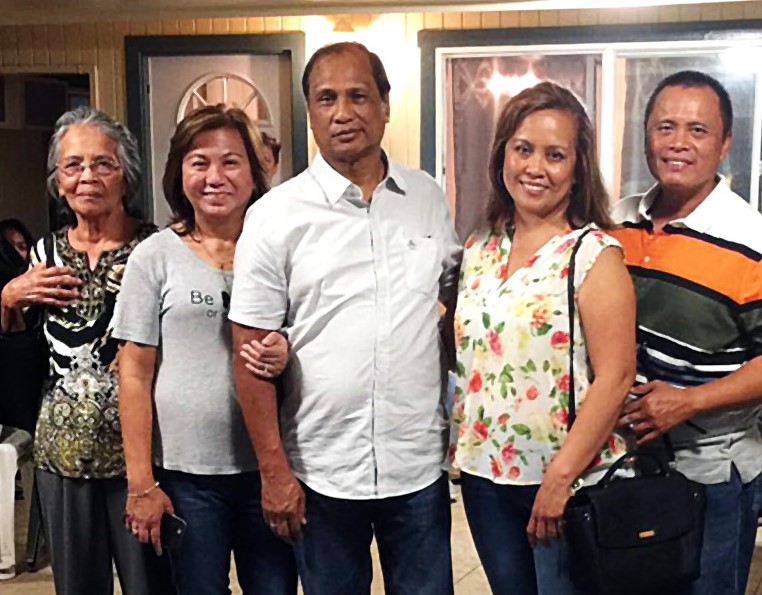 SAN ESTEBAN MAYOR RAY ELAYDO (center) poses with relatives and friends during his recent visit to Maui. (photo courtesy of Monica Elaydo Natividad)
by Edward B. AntonioPosted on November 5, 2018January 20, 2019

SAN ESTEBAN, Ilocos Sur – Mayor Ray Elaydo of this town said there is “no issue on political dynasty” in his town although the Elaydos have ruled the town for more than two decades already.

“Ours is a politics of performance and everything that we have done are all for the good of our people. This is proven when we won the prestigious Seal of Good Local Government (SGLG) last year,” he said as he enumerated the 5 flagship projects of his administration during a Kapihan Iti Amianan forum held at his office over the weekend.

These projects, he said, are the rehabilitation of the municipal hall (P13 million), the retail store in front of the church (P10 million), improvement and air-conditioning of the town’s civic center now with memorabilia displays and gallery-library room, the improvement of the fishport that can accommodate yachts and big fishing boats (P50 million) and the construction of a big public market which he said is worth P25 million appropriated by Governor Ryan Luis Singson.

“Another P62.2 million has been appropriated by our governor for the construction of irrigation canals, water impounding projects, FMRs (farm-to-market roads), a multi-purpose hall in Barangay San Pablo, a farmers’ trading center and the road in Barangay Kappakappa which is worth P20 million,” he said.

He also said that 30% of its RA 7171 funds goes directly to farmers in the form of fertilizer, water pumps and other farm equipment and to the FMRs leading to the farmers’ barangays. The direct giving of RA 7171 funds to the farmers was started by then Vice Mayor Mildred Elaydo (now a provincial board member) and increased to 30% by the present administration.

“Our farmers here are indeed very lucky, for they are also provided each by Congressman Eric Singson with P5,000 worth of farm inputs. Not to be outdone are also our fishermen. The Department of Labor and Employment (DOLE) has provided them with several payaw and a big fishing boat which can travel as far as in the mid-China Sea,” he said.

He said that he will also be making a replica of the shipwreck left by the USAFFE (United States Armed Forces in the Far East) in the seashore, provide shower rooms for tourists and build a watch tower as a national tourist attraction of the town.

“Our people trust us because everything that we do is transparent. All municipal projects are accounted for and they are published in newspapers and in souvenir programs and all agencies are provided with a copy,” he said.

As a contender for the 2018 Seal of Good Local Governance Award, Elaydo also announced that San Esteban is now drug-free and that he has signed a MOA (Memorandum of Agreement) with the municipality of Sta. Cruz and Candon City for the two to cater to its landfill problem which is one of the requirements in the SGLG contest.

Running uncontested this coming May 2019 elections, Elaydo, who is a former DPWH district engineer for Ilocos Sur’s 2nd District, is the brother of former Mayor Chester Elaydo and husband to Sangguniang Panlalawigan Member Mildred Elaydo. Five Elaydos are currently serving in the municipality of San Esteban including SPM Mildred Elaydo. (Edward Antonio)