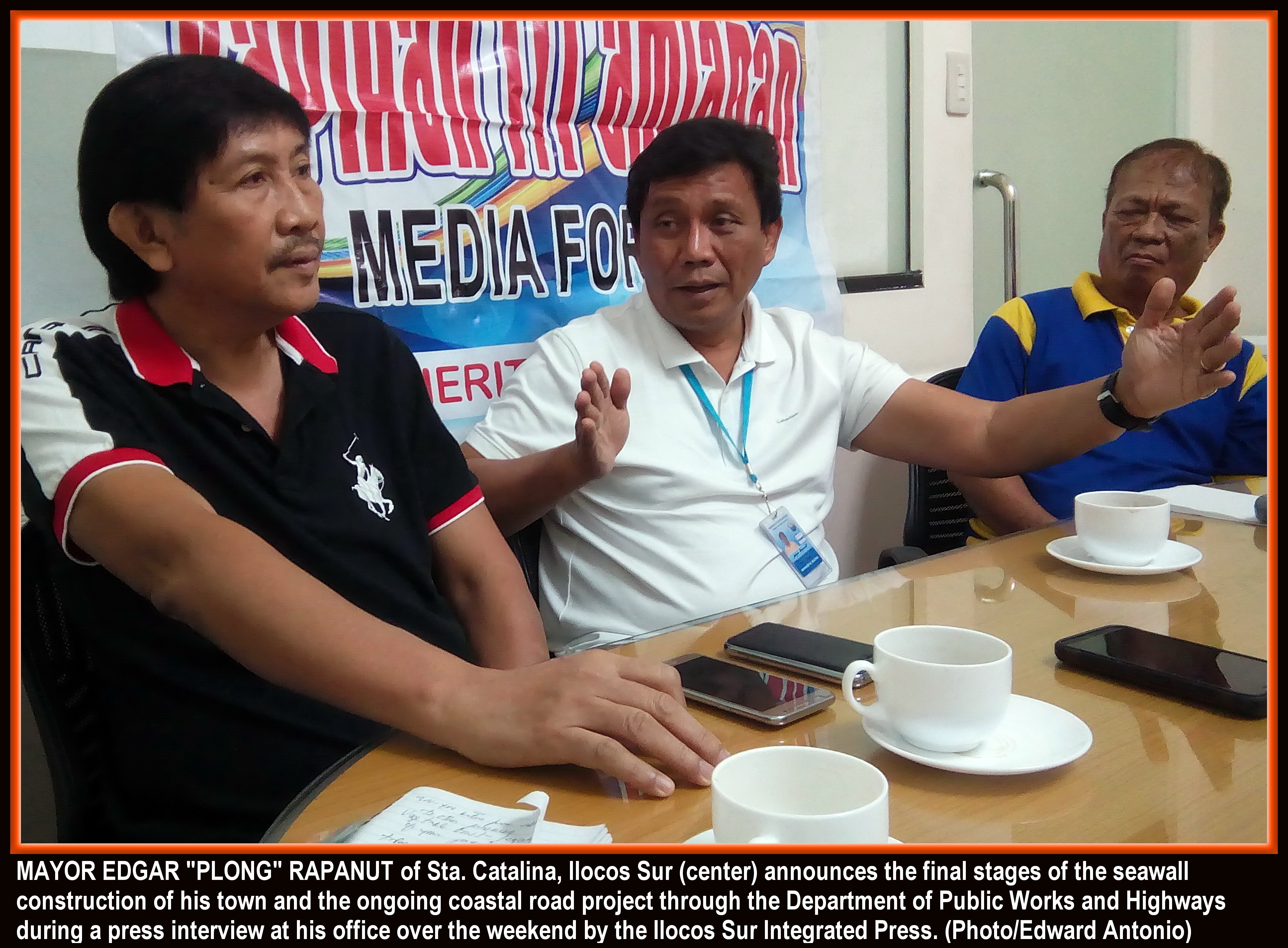 STA. CATALINA, Ilocos Sur – Mayor Edgar ‘Plong’ Rapanut of this town has high hopes his town will be included anew among the 2018 recommendees for validation for the prestigious “Seal of Good Governance Award” as he enumerated the various projects his administration is in to during a press interview at his office by the members of the Ilocos Sur Integrated Press over the weekend.

Sta. Catalina is a recipient of the “Seal” award last year.

“Actually, there are more criteria now,” he said. “One, the municipal government must be friendly with all PWDs; there must be signboards for Disaster Risk Reduction and Management or DRRM; good financial housekeeping; and the additional criterion is that the town must have its own garbage disposal area or landfill, which we do not have. But hopefully, we will be able to sign a MOA with Narvacan that we can dispose our garbage there.”

He said that the town’s MDRRMC is 100% prepared to respond to any disaster incident and that its model 3-storey evacuation center is ready to accommodate 200 families.

“This is not an ordinary evacuation center,” he said. “There is a cooking area, couple’s room, place for nursing mothers and can withstand an earthquake up to magnitude 8 or even a Yolanda-strong typhoon.”

“Sta. Catalina is a coastal town below the sea level,” he said. “That’s why we have to be prepared all the time. Our 2018 seawall project will be finished on or before October 2018 and the destroyed portion has been repaired and made higher so as to prevent the big waves from getting over the sea wall.”

In agriculture, he said that the town’s venture on tobacco production “is okay but still needs polishing.”

“I did not know that tobacco planting is chemical intensive. However, we will continue planting tobacco until we have perfected the art using our RA 7171 funds. We learn through experience.”

Sta. Catalina has long been declared as “salty” for tobacco production that’s why the town has shifted to vegetable farming hence its moniker as the “Vegetable Bowl of the North.” But its vegetable business has its up’s and down’s that’s why Rapanut said they tried planting tobacco as alternative.

“Hopefully, we can perfect our production next time for a higher yield,” he said.

In infrastructure, aside from its seawall project, Rapanut said that the “baywalk” project will be starting soon, as he has already talked with the barangay people affected.

“But our funds for the baywalk project has been used muna for our drainage projects and covered court of the barangays which are the more immediate needs of the people,” he said.

In its anti-drug campaign, he said that recently, some people were arrested during drug buy-bust operations but he refused to further elaborate.

“The arrested people have talked but I don’t want to mention the personalities they indicted as I don’t want to be accused of politicking. Let the PDEA and the PNP do their job,” he said.

In social services, he said that the LGU is giving out P2,000 death aid to affected families regardless of status in life and also P2,000 as sickness aid to the people.

“But I want to make it clear that the money does not come from me. It comes from the LGU,” he said.

He also announced that the issue on Sitio Namnama in Barangay Tamurong, between Sta. Catalina and San Vicente has already been settled.

“We have agreed with Mayor Tabanda that we will come out with a map that would define our boundaries,” he said.

Lately, Mayor “Plong” has been appointed as consultant in the expansion project of the Vigan Airport in Barangay Mindoro.

“I’m just an emissary representing Congressman DV Savellano, Governor Ryan Singson and former Governor Chavit Singson for the speedy facilitation of the project which is composed of runway widening and extension and the acquisition of some 6 hectares for the Vigan Airport Development Program. It’s a long and tedious project through the DPWH but it’s moving.”

He said he has also stuck to his promise to keep all employees intact, removing nobody from office whether they voted for him or not in 2016.

“Awan ti inik-ikkatko wenno naag-agrabiado, (I did not terminate or degraded anybody) because they also have their own families. They have their security of tenures. What I did was to reassign some to their field of interest or talent,” he said.

The mayor, who is fondly called by his constituents as “masang-masa ang dating,” is the son of the late Porfirio “Ompeng” Rapanut, a long-time mayor of this town. His wife, also a CPA like him, is the Vice President of the Land Bank of the Philippines based in Manila and they have two children. (Edward B. Antonio)