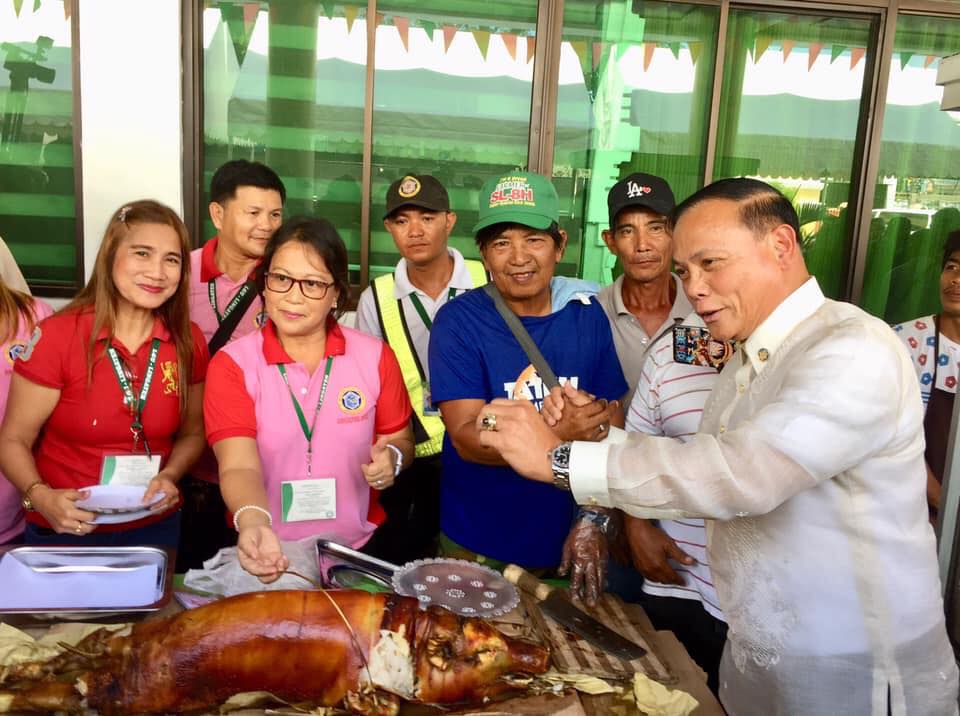 PORK FESTIVAL. Various pork meat viands, including Lingayen town’s new product – the lechon bagoong, are served during the pork festival held at the municipal hall on Wednesday spearheaded by the local government unit of Lingayen led by Mayor Leopoldo Bataoil to show that pork meat is safe for consumption amid concerns about the African swine fever and to help meat vendors and hog raisers regain their sales. Before the pork fest, Bataoil reported on his first 100 days in office and bared his future projects for the people of Lingayen. (photo by April M. Montes-Bravo/PIA Pangasinan)
by APRIL M. MONTES-BRAVO / PIA PangasinanPosted on October 11, 2019October 11, 2019

LINGAYEN, Pangasinan — The local government unit of Lingayen, with members of the hog raisers’ associations here, hosted on Wednesday a pork festival at the municipal hall to show that pork products sold in the local markets are guaranteed free from African swine fever (ASF).

Mayor Leopoldo Bataoil led the residents as they feasted on the town’s new product, the Lingayen lechon bagoong and other pork meat viands to prove that pork sourced from this municipality is safe for human consumption.

The mayor expressed optimism that the feast would restore the trust and confidence of the public as the local government is trying to protect the swine industry from the entry of ASF.

He urged everyone to help the local government in protecting this industry in support to the livelihood of those engaged in hog raising.

A recent update from the Provincial Information Office (PIO) stated that all towns within the seven-kilometer radius from ground zero (Baloling village in Mapandan town) tested negative for ASF.

“Following the 1-7-10 protocol, some hogs from the towns and cities within the seven kilometer radius, namely: Mangaldan, Manaoag, Urdaneta, San Jacinto, Laoac, Pozurrobio, and the rest of Mapandan are under surveillance, hogs were randomly tested and came out negative,” PIO said in a statement.

It added, “Strict monitoring of pigs in Calasiao, Sta. Barbara, San Fabian, Malasiqui, and Dagupan which covers the 10-kilometer radius is also observed.”

Lechon boodle fights were held earlier in the municipalities of Mangaldan and Pozorrubio to assure the public that it is safe to eat pork.

Pork dishes were also served in a boodle fight spearheaded by the local government of Asingan yesterday to show that pork meat is safe for consumption amid concerns about the ASF and to help meat vendors and hog raisers regain their sales.

Before the pork fest, Bataoil reported on his first 100 days in office and bared his future projects for the people of Lingayen.

Bataoil was recently elected as president of the League of Municipalities of the Philippines-Pangasinan chapter.