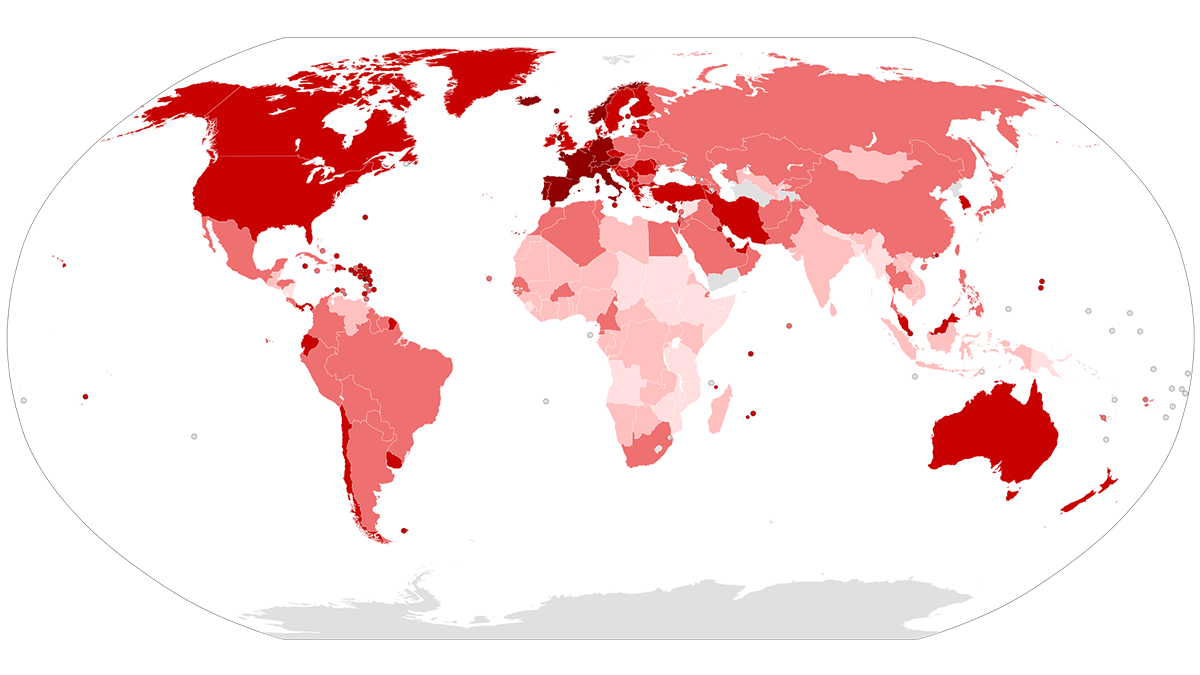 By Raphaël Dunant - Own work, data from 2019–20 coronavirus pandemic data and List of countries and dependencies by population, CC BY 4.0, Link
by Alvin P. Ang (Ateneo de Manila University) and Jeremaiah Opiniano (University of Santo Tomas)Posted on April 6, 2020April 6, 2020

The COVID-19 pandemic may well be the most challenging crisis facing the migration management system of the Philippines. The global dispersion of overseas Filipinos (estimated to be at least 10.3 million, in over-200 countries and territories) meets up with the global spread of the viral disease. Both the countries receiving overseas migrants and migrant-origin countries like the Philippines are now trying to survive, unleashing stimulus packages or rescue funds to meet the needs of their citizens.

Remittance flows from abroad are literally a major economic lifeline. This lifeline will then backstop whatever public funds the Philippine government is now unloading to meet urgent survival and social protection needs of Filipinos. The scale of Filipino households who continually receive foreign remittances? Around 12 percent of all Filipino households “have or had an OFW [overseas Filipino worker] member,” says the 2018 National Migration Survey (NMS).

With much of the global economy in a lockdown, many OFWs are unable to report for work and, at the same time, are unable to send money back home more frequently.  In addition, declining oil prices in the past few weeks are a corollary challenge, threatening the stability of OFWs in the Middle East.

During the 2008-09 global financial crisis, the presence of OFWs in many parts of the world has spread the risk of slow levels of total remittance inflows to the Philippines.  However, COVID-19’s spread has now reached literally the entire planet. As of April 2, over-940,000 people have been infected with COVID-19 (including some Filipino migrant workers, permanent residents and naturalized citizens).

The impacts of the 2008-2009 crisis on OFWs were not as severe as initially anticipated. Many OFWs remained in their working countries, adjusting their statuses there by deskilling (e.g. an engineer laid off, continued to work as an electrician) and by coping and riding through the short-term impacts of that crisis. Workers were still physically mobile at that time.

In the current scenario, many countries are on lockdown and all the oil producers in the Middle East (where nearly half of our OFWs are based) are at risk with falling oil prices. If this price trend continues, the Middle East might be forced to stop oil production and possibly lay off many workers —including Filipinos.

With the combined impacts of the global economic stoppage, lockdowns and declining oil prices, base-to-worst case scenarios could lead to:

a)     Cash remittances potentially declining from US$ 30 billion in 2019 to US$ 27 billion (base case) to US$24 billion (worst case). That is roughly 10-to-20% or US$3 to US$6 billion less, year on year —this to become steepest drop of remittance inflows in Philippine migration history; and

These base-to-worst case scenarios are significant numbers hitting the economy externally and then internally. With overseas Filipinos’ remittances fueling national consumption, we can lose 20 to 40 percent of consumption due to the pass-through effect of remittances.

Some things that can be done now:

[1] Since the SOF is just a rider to the October round of the quarterly Labor Force Survey (LFS), we are just taking samples of the bigger universe of overseas Filipino workers (OFWs).