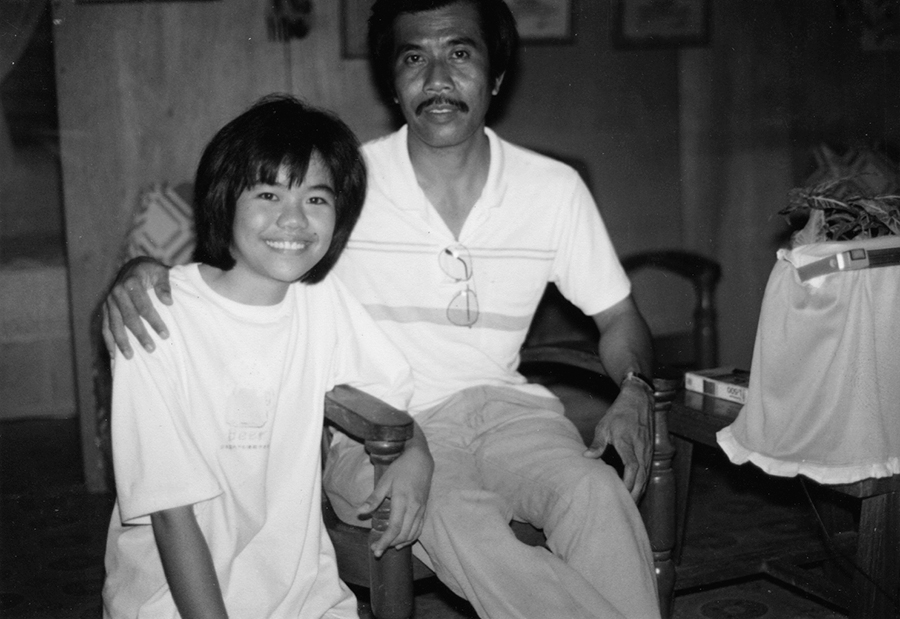 If you were to ask me about my childhood, I would tell you memories that are peppered with my dad’s presence.

I was a “daddy’s girl.” I always felt a certain comfort in having him around which was perhaps why I liked lingering around him. I would linger while he was with his friends drinking San Miguel beer, eating pulutan and talking about matters I didn’t understand. I would linger around his “shop” or the classroom where he taught home economics for boys and endured the smell of wood shavings and tools. While I was usually grumpy and lazy, I didn’t mind bringing him his shoes for when he goes to work and his slippers when he comes back home because they were reasons to linger. I remember having a bad dream one night and I woke up scared and confused. He was there quickly to give me a hug and gave me that instant feeling of comfort.

He was a heavy smoker, so I was told. He himself told me there was a time when he would smoke a pack a day. But he quit cold turkey when I was born. I was pale, I needed blood transfusion and he felt helpless that he could not be my blood donor because he was a smoker. So he quit. I suspect the same event made him overly protective of us his children. He never let us go too far from the shore when we were on the beach. I remember him running to us in panic when waves crashing onto the shore made us lose our balance. We were not allowed to play under the rain so we wouldn’t get sick. And when we did get sick, he was the kind of parent that nurses didn’t want to deal with.

He had a quick temper. Ask the kids who threw stones at our mango trees in the hope of making the fruits fall to the ground. He would shout and chase them away. Over the years he had fall outs with some of his friends which I assumed to be due to his temper. Even his own mother and brother were not spared. But with me, he was always patient. I remember the day when I decided to get something from the cupboard above our kitchen sink. That was where the cornmeal ration from school was kept. My mother would sometimes turn the cornmeal into polvoron. Maybe I was hungry then and wanted some for snacks. I grabbed a chair and stepped on the counter. I don’t know exactly how it happened, maybe my short pants got caught on the dish drainer. Next thing I know, I heard all our plates breaking on the floor. Life was hard then, those were probably the only plates we owned. But he didn’t get angry with me, he didn’t raise his voice, he didn’t spank me. He helped me down, made sure I didn’t step on the shards and quietly swept the floor. I didn’t know he remembered that accident too, until the time my daughter accidentally dropped a glass and he told her that story. Maybe he saw that I was about to get angry, it was his way of reminding me to be patient.

He was always generous. Not just with his money but also with his time. When he got home from work, he would bring me around the neighborhood in his bicycle. I remember sitting in front of him as he pedalled, the wind blowing on my face and feeling… lucky. That’s what I remember feeling — lucky to have a father who took me out on a ride to wherever I requested. He would help me practice for poster making contests and rehearse speeches for our commencement exercises in school. When I decided I wanted to become a doctor, he retired as a teacher and used his retirement money to send me to school even when he had qualms about me living in Manila on my own. Even when we got older, he was always ready to rescue us in our need. Short on budget? No worries, daddy was there. All the time.

He was the same with my daughter. When we went to a toy store, she did not need to say a word. Lolo Badong, as my daughter fondly called him, would know which toy she wanted judging by the number of times she circled around the toy. She did not ask, beg or whine but Lolo bought her the toy anyway. But although Lolo spoiled her with material things, what I hear my daughter say these days is not how much she misses the toys or the clothes or the books but how much she misses how Lolo Badong played with her in the park or in her playroom, how he told her stories, how he accompanied her anytime and anywhere she wanted to go, how he spent his time with her. When my parents went home to Vigan after spending several days with us, he would always send a text message to say thank you. If he was a battery, he said, Monique was his charger, and the time spent with her was enough to recharge him.

“I wish Lolo is still here,” my daughter says now and again and I feel a pang of pain at the thought that Lolo Badong will not see her grow up now. I can only hope that she finds enough memories with Lolo from her past nine years to give her comfort and joy.