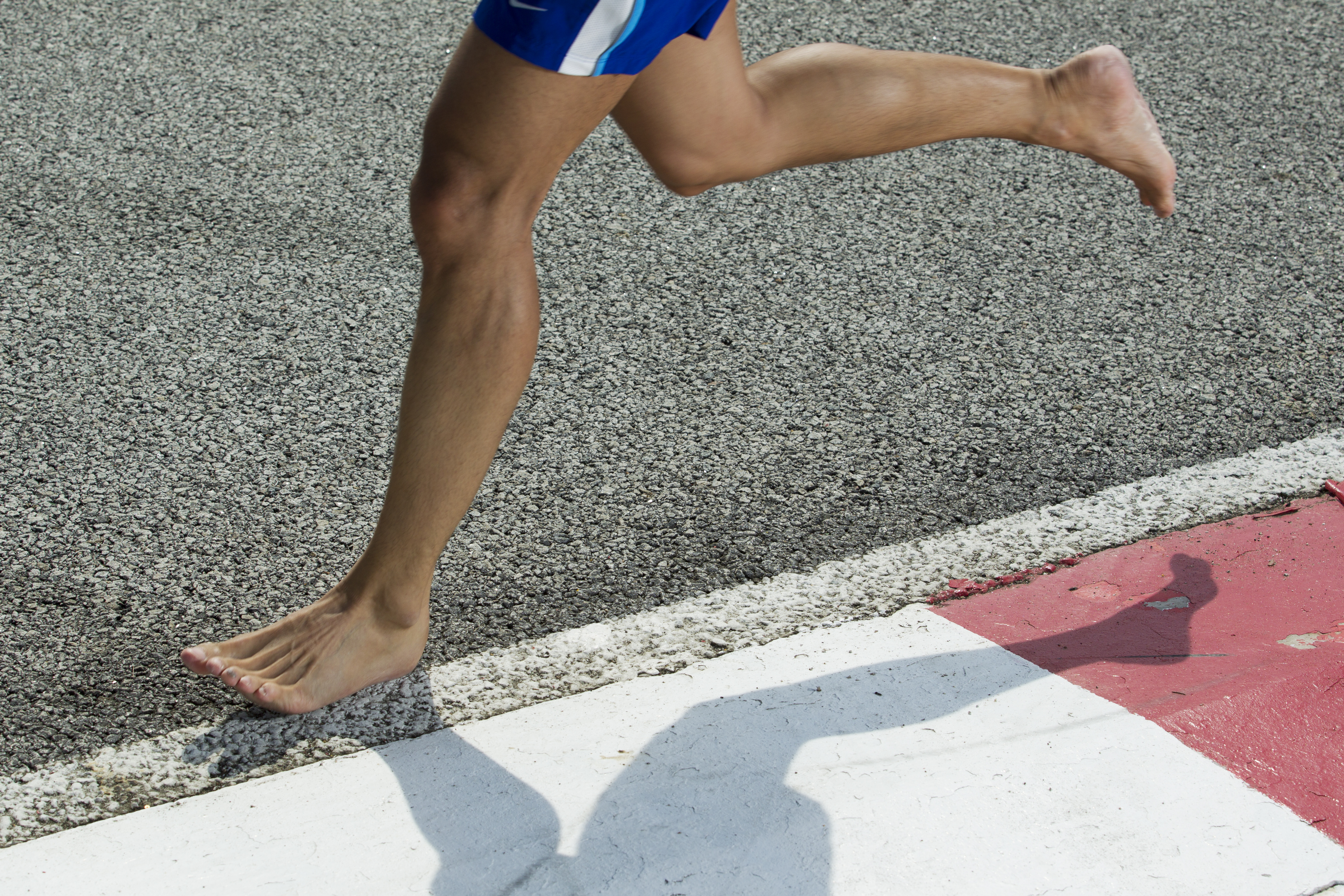 A closeup of a runners feet while barefoot running on a track
by Edward B. AntonioPosted on April 24, 2018April 24, 2018

When the news that a barefooted girl won in the 3000m run in the 2018 Palarong Pambansa, it immediately became viral in the social media and in the newspapers. Lheslie De Lima, the human version of Bicol Express, breezed past her 8 opponents to win the race here at the Quirino Stadium although she was 3 seconds short of tying the Palaro record of 10:03:04. She said she is not comfortable running with her shoes because they are too heavy.

This reminds me of San Francisco personal trainer Kate Clemens who once did that, 6 miles into an 18-mile race along the Pacific Crest Trail. After feeling a sharp pain in her knee, she took off her shoes and ran barefoot. Without shoes, her knee pain disappeared, and she was able to finish the race.

“I felt a difference the minute I took my shoes off,” she recalls. “When I’m barefoot, my alignment is better and I run more from my core.”

Conditioning mentor Jodi Helmer said that runners who wear shoes tend to strike the ground with the heels first. This gait, called a heel strike, generates a force up to three times the body’s weight, which can lead to injuries such as Achilles tendinitis and stress fractures.

In contrast, barefoot runners land on the balls of their feet, generating less impact when their feet strike the ground.

Perhaps, the Bicol Express lass already knew these facts when she started running.

Another team to watch is Region 7’s elementary football team, the defending Palaro champ. To date, the team has not allowed any opposing team to score a point, a feat which is very impressive considering that it has been playing with the best elementary kickers in the country. Its earlier victims were Mimaropa, CALABARZON and Northern Mindanao. CALABARZON was 2nd overall last year while Northern Mindanao was 8th.  Mimaropa was 2nd to the last.

What is quite amusing is that after each victory, Coach Glen Ramos and his kids would gather around a Sto. Niño image and pay homage for their victory. A team member said it’s their “lucky charm,” believing that God is their source of strength.

“ARMM is a darkhorse also, but we are ready for them,” Ramos said.

Good luck, then to Coach Ramos and his Cebu-based football team.

See you and the kids around in your quest for gold.