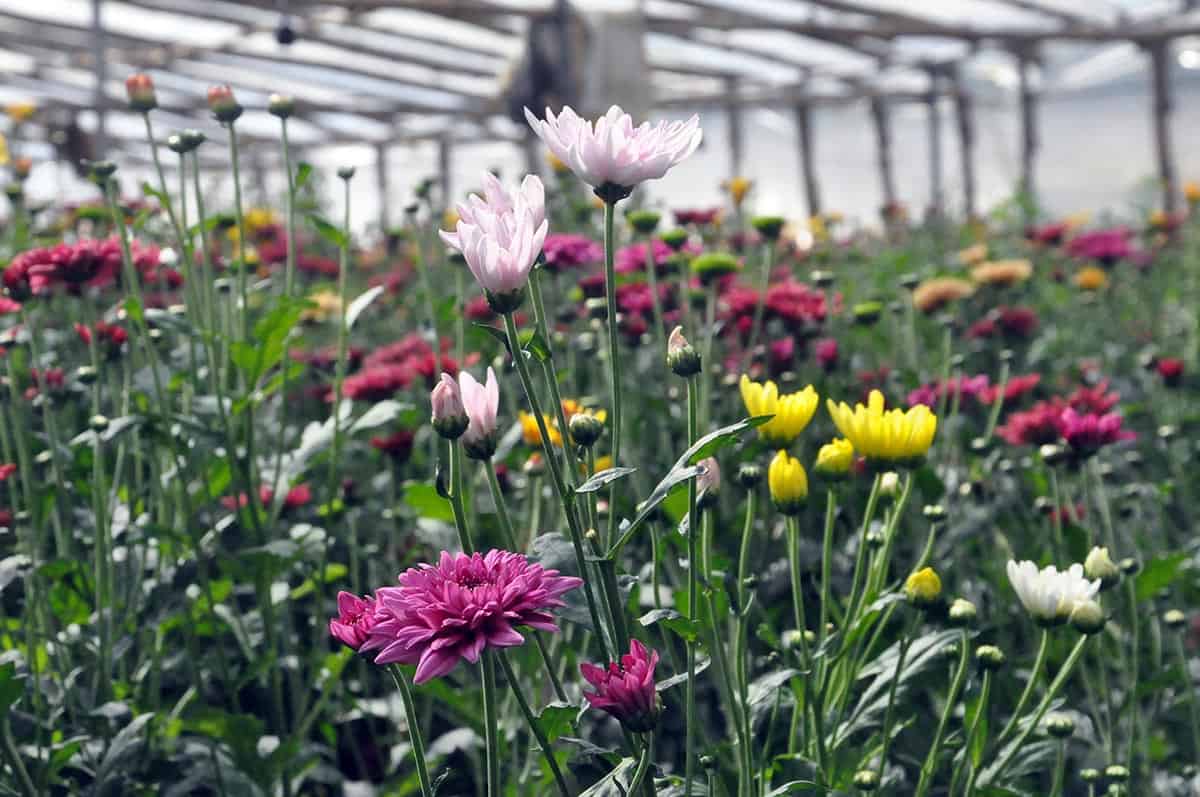 FULL BLOOM. Benguet is the country’s top producer of Chrysanthemum in the country producing 1,348.50 metric tons in 2018. In photo are Rados, a variety of the flower cultivated in one of the greenhouses in Bontoc Village, Bahong, La Trinidad. Photo by Sherwin De Vera.
by Sherwin De VeraPosted on June 6, 2020June 6, 2020

BAGUIO CITY— “Worst crisis to hit the cut flower industry,” was how Virginia Bahod and Imelda Marcelino described the impact of the Coronavirus disease (COVID-19) pandemic and restrictions under the Luzon-wide enhanced community quarantine (ECQ). Both are owners of farms in Bahong, La Trinidad.

Bahong is known as the Rose Capital, but many farmers, like Manang Virgie and Imelda, also plant Chrysanthemum and other flowers.

The two said most of their harvests for March and April went to their compost, to serve as fertilizers for their next crop. They both lost an estimated P400,000 in sales for the two batches of chrysanthemum blooms harvested for the said months.

While cut flowers were considered agriculture products, they said the closure of the Dangwa Flower Market in Sampaloc, Manila made a large dent in the industry. Based on past sales, 80% of their product goes to Manila. They sell the rest n Baguio City and nearby provinces in Northern Luzon.

(We lost a lot. There were those which we were about to harvest, but then COVID came. There’s nothing. We are no longer able to market [our flowers], that’s why we do not have any gains.)

The 62-year-old farmer lamented that while she was able to send some of her harvests to Manila, flower traders bought their products cheaply.

(We were able to market just a handful, but a lot went to the garbage because there’s practically nobody buying since no one has the money.)

According to her, a dozen of her Rados (a variety of Chrysanthemum) sells for P100-120 before the lockdown.

(These days, P20 would suffice as a selling price rather than getting our flowers thrown away. We would settle for P50, but that’s already a hard sell. Usually, below P50 would be the selling price of the ones we deliver to Manila.)

Like Manang Virgie, Imelda is losing hundreds of thousands.

From February to May, her net profit from the previous years averages at P600,000. This period, according to her, makes her unsure if she can recover her expenses.

(We set our harvesting times monthly, but since March this year, everything has been a waste. The next blooming season is near but I’m afraid I’ll have to throw away my harvests again.)

She recalled that Chrysanthemum sells for P50-60 per dozen, but now, they are only worth P20-30.

Last week, she traveled to Manila to sell her harvests, hopeful of breaking even from her expenses. According to her, demand runs high during May because of the Flores de Mayo festivalsand Mother’s Day. However, she was only able to take home P10,000 out of the Malaysian mums that she delivered with an estimated value of P200,000.

A report quoted Bahong, La Trinidad barangay captain Belmer Elis that of all the farmers, those growing cut flowers are the most affected by the COVID-19 pandemic.

He pointed out that all flower shops closed during the ECQ. There were also no events that usually warrant for embellishments such as flowers.

Under the ECQ, the government prohibited events and social gatherings.

According to the official, farmers could sell a significant part of their harvest during Valentine’s Day. Since then, losses continue to rise each day.

Elis counts their losses at an estimated P50 million as of the first week of May.

Growing cut flowers is expensive. For a 500 square meter land, Imelda and Manang Virgie spend around P150,000. The amount comprises the cost of labor, inputs like fertilizers and pesticides, and electricity.

The said expenditure does not include the depreciation cost of their equipment, tools, and greenhouse. Also excluded from the amount is the price of maintaining a greenhouse, an irrigation system, and the lease for those who are renting the land they are tilling.

Manang Virgie said she is paying P80,000 annually for the 3000 square meters that she cultivates.

(It is tedious. We have to trim the mother plant so that when it grows, it will serve as cuttings that we will root at the nursery. Once it takes roots, we have to transplant it until it blooms.)

Producing the seedling from the “mother plant” takes about a month. They would wait another three months to grow the crop from seedlings until it blooms, ready for harvest.

Despite the significant decrease in the demand for flowers, they still have to maintain the farm. They continuously tend the crops, especially the mother plant, the source of the seedlings.

Most of the workers who attend to the farms are daily wage earners or makiporpordia in the local language, receiving P350 per day. Farm owners only keep a couple of hands for the farm maintenance.

Imelda said she used to employ 15 “regular” workers on her farm. Each receives P400 per day. However, after losing heavily after the lockdown, she had to trim her workforce to only five.

Before the ECQ, Elizabeth Fidchao recalled that they work in cut flower farms four to five times a week. She said she earns just enough to sustain the need of her family. However, with the restrictions imposed with the spread of COVID-19, she was only called to work twice in two months.

([These times are] hard since we have no source [of income]. We’ll have to make do with what we have.)

Asked how her family survived without their regular income; she said they harvested whatever edible plant grew in the farms. They also made the relief they received, which were enough to three days, to last for a week.

Manang Virgie said the Department of Agriculture is providing loans for cut flower growers affected by the marketing restrictions during the quarantine period.

She and Imelda applied for the loan from the DA’s Survival and Recovery (SURE) Assistance Program through, implemented through the Agricultural Credit Policy Council (ACPC).

Under the program, cut flower growers can borrow P25,000 with zero interest. The amount is payable in three years or more and requires no collateral. They can use the money for their overhead cost during the period. Beneficiaries are those that do not own more than one hectare of land. The borrower may also utilize it for other business undertakings to compensate for their losses.

According to the DA-CAR director, the list provided by local governments contained 4000 farmers cultivating cut-flowers in Benguet.

While she appreciated the program for being interest-free, Manang Virgie underscored that the amount is insufficient to cover their losses during the quarantine period. Even with the assistance provided by DA, she said, most of them are likely barrow from other lending institutions or individuals to sustain their farms and production.

(They could have made the amount larger so that it can provide for our actual needs. We hope that they could add more to the loan as long as it is without interest and payment terms are long, we are okay with that.)

According to the barangay, as of May 13, more than 300 Bahong farmers have received government assistance.

According to the DA, CAR produces about 53 million dozen of cut flowers annually worth P28 million. The flowers come from more than 1,500 hectares of cut flower farms located in the Municipalities of Atok, Tublay, Kibungan, and La Trinidad.