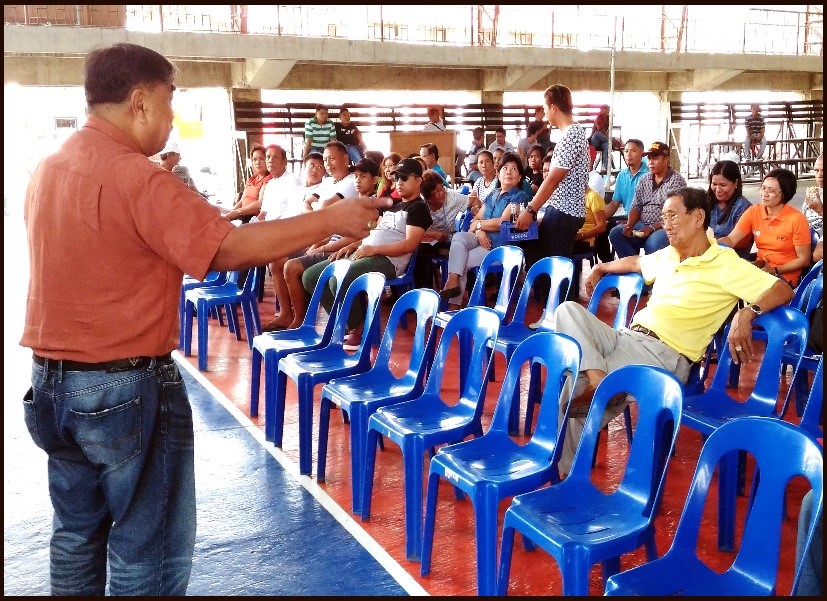 WHY THE SHIFT IN GOVERNMENT FORM? CONVENORS Enrie Mendoza (left) and Francis Domingo of the Hugpong Federal Movement of the Philippines (HFMP), Ilocos Chapter, answer queries during the 1st Federalism Information Drive campaign at the Sta. Catalina ABC Hall, April 27. (photo/text by Edward Antonio)
by Edward AntonioPosted on April 30, 2018January 20, 2019

VIGAN CITY – Social Security System (SSS) Senior Communications Analyst Maureen Inocencio encouraged all contributors to continue paying their monthly contributions because these are forms of savings and investments that the contributors can avail in case of retirement, illness, disability or death, during a Dap-ayan media forum at the Provincial Capitol, April 27.

“Sulit na sulit po ang mga benepisyo na matatanggap ninyo,” (Your benefits are full once you avail of them), she said.

She also said that the significant increase in both areas come from the SSS’ salary loan interests and real estate investments.

“In fact, we have exceeded our target of P189.79 billion despite the fact that we have increased the pension of our more than 35 million pensioners by P1,000 each,” she said.

To maintain the stability of its funds, the SSS, she said spends only 12% of the members’ accumulated contributions and 3% from its investment.

Asked on the salaries of SSS employees compared to the salaries of GSIS personnel in the hierarchies, Richard Raralio, the OIC Head of SSS Vigan City said their last salary increase was in 2002.

“Ito po ang isa sa aming mga concerns because up to now, our request for salary increase has not been approved although there have been promotions. Other agencies already increased in their PERAA benefits by P1,000 a month but we in the SSS, wala pa since we applied for it in January 2017 pa,” he said.

He also said that an SSS driver receives less than P10,000 a month. He did not give figures, however, on the salaries received by SSS executives or branch heads and managers. (EDWARD B. ANTONIO)