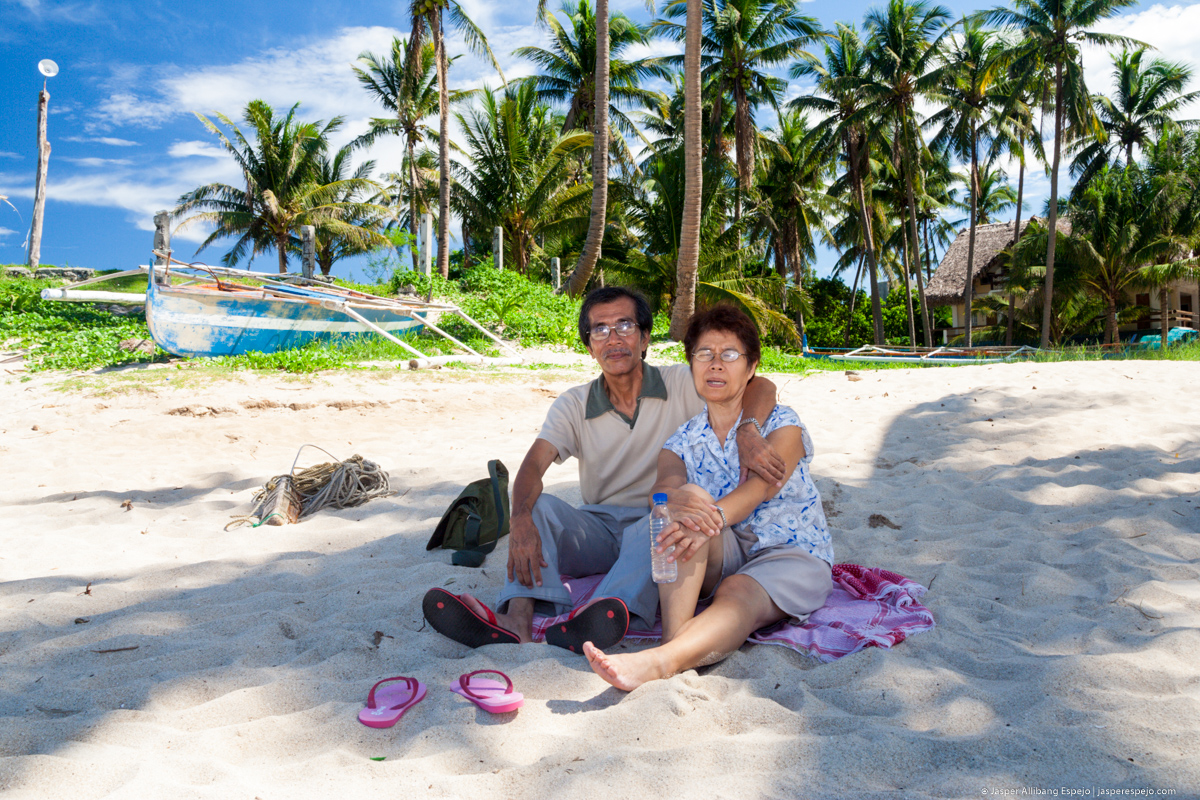 By 9:30 a.m. the next day, I was in Claveria’s van terminal, waiting for more passengers to arrive and fill up the empty seats so that our van could be on its way. Not long after, our van was speeding across a scenery of hills, mountains and rice farms. As our car curved its way along the side of a mountain, a view of the sea opened below us to the right and I knew from remembering the map of Luzon that we must be at Patapat, the stretch of the national highway that connects Cagayan and Ilocos Norte and that I must be nearing my destination.

I was not wrong. Just after noon time, the van stopped to let me go down along the highway where several tricycles were parked. Nearby was a marker that read Pagudpud. I approached one of the tricycle drivers and asked him to bring me to a resort that I found online.

The resort was located in Saud, next to a more expensive one. Situated in the middle of a coconut grove, the resort looked homey with its cogon roof and open restaurant. The beach was a very short walk away. It was next to the public beach and had quite a lot of people passing by, but it was a nice change from the rather lonely beach of Claveria. The next day, I arranged for the same tricycle driver who brought me to Saud to tour me around Pagudpud. My guide met me around 8 a.m. at the resort and we promptly left heading north.

First on our itinerary was Kabigan Falls. A good 30-minute or so walk from the main road, Kabigan falls was the most inaccessible among the places in the itinerary. The falls was situated in a forested area and was still relatively untouched. The natural pool at its base looked inviting but I learned from my guide that we had several more places to see that day, so I decided to just take a few photos and move on in order not to end the tour too late in the afternoon.

We next rode to the farthest point of the tour to view the Patapat Viaduct, the scenic stretch of the national highway that hugged the side of a mountain range dividing Ilocos Norte and Cagayan.

Then we moved on to Bantay Abot. The rounded rocky formation with a gaping hole in the middle looked like some giant dunked a large donut into the sea and its upper half was sticking out.

From Bantay Abot we drove farther on a rocky trail down a hill to reach a magnificent beach with the bluest water I had ever seen. Its name was true to its appearance, the Blue Lagoon. Whenever I see photos of the place now in travel websites, I feel sad how that place had degenerated to yet another “paradise lost.” But back in 2008, the Blue Lagoon looked pristine. Landward from the sandy beach, there was nothing to see but a few seldom used huts and wilderness. 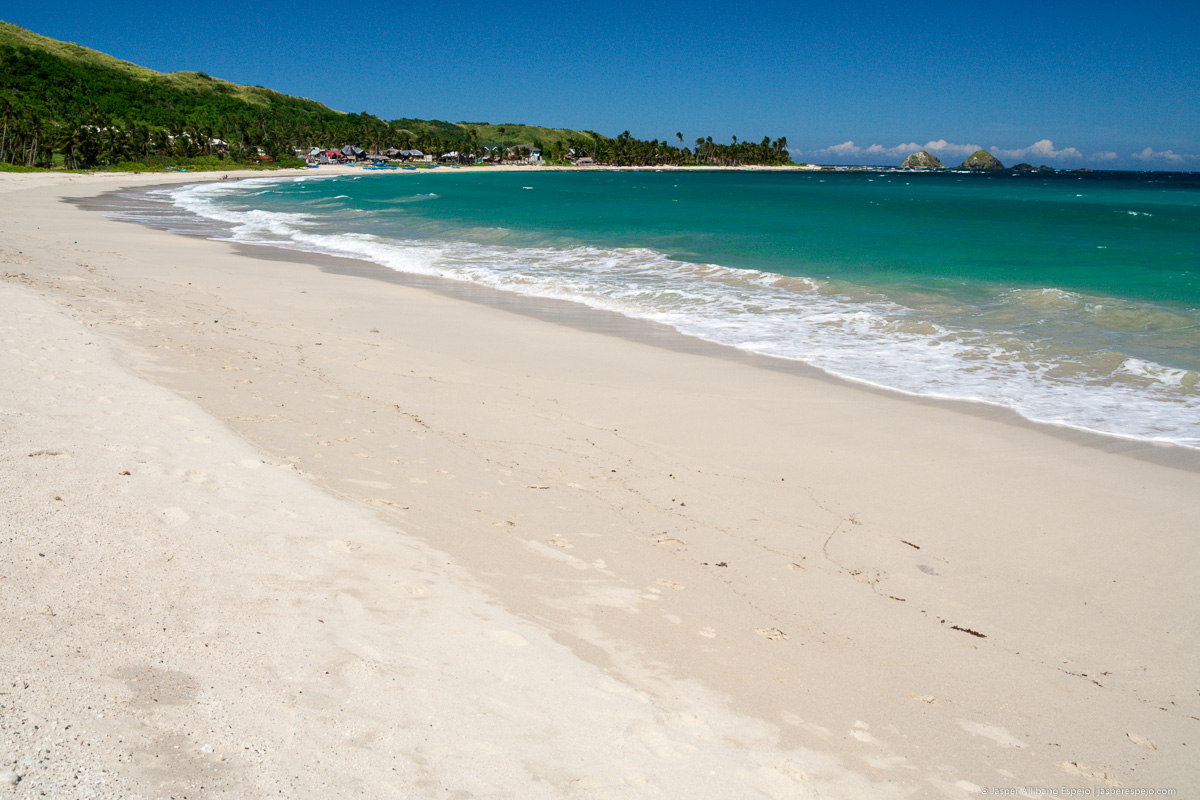 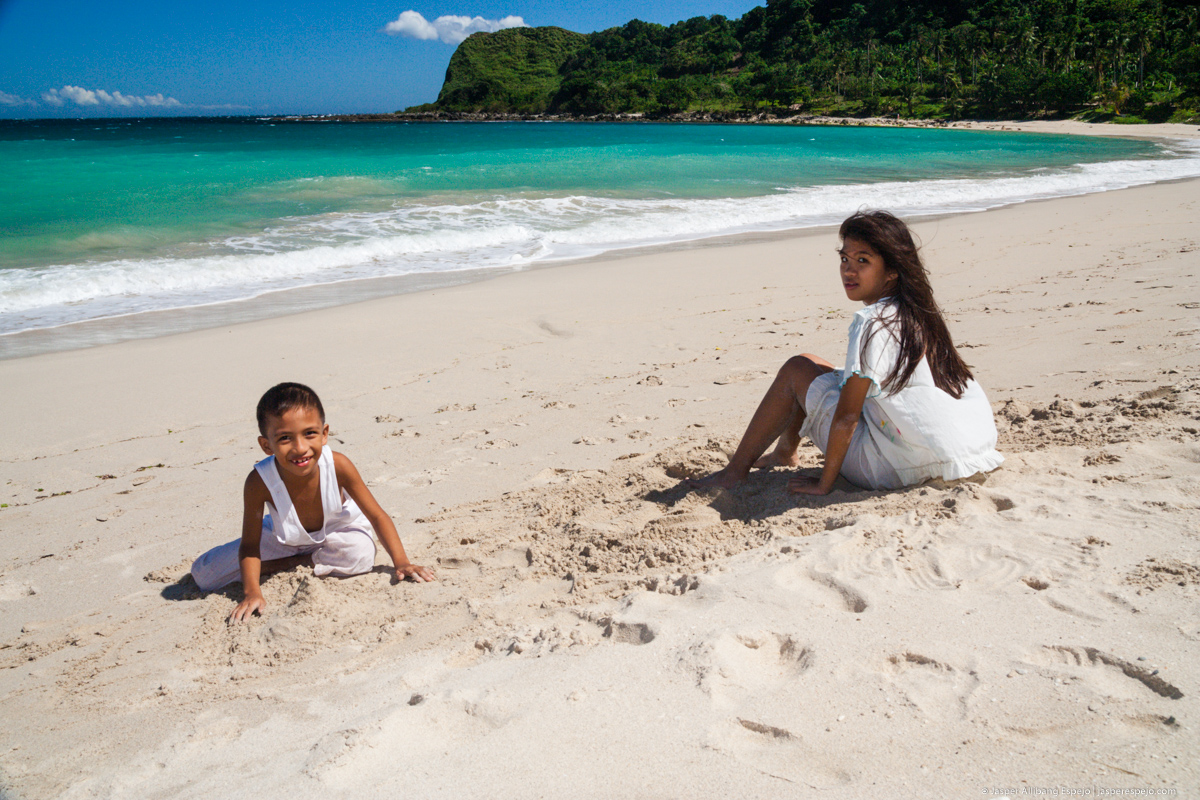 As I wandered down the beach, I chanced upon a pair of kids, one boy and one girl, playing on the sand. I thought to myself how lucky they were to have this paradise playground all to themselves.

By then, it was noon time. I wanted to stay longer at the Blue Lagoon, but we needed to return to the town for lunch. We had a quick meal in one of the local carinderias then rested a bit. Not long after, we were headed south of Pagudpud and were soon driving up and around a hill to reach an old Spanish colonial lighthouse on top. The lighthouse of Bojeador had been guiding ships for more than a century and was still functional. Like with any other ancient structure, the lighthouse had its share of ghost stories. After coming down the tower, the caretaker asked me if I met any lady on top. I answered no, a bit confused. He simply laughed and told me around that time of day, a few guests had seen the reflection of a woman in the concaved glass of the lamp installed at the top of the lighthouse. He said he also had seen her several times but that it was ok. She meant no harm. Sadly, I did not have that luck.

Warm breeze blew in from the sea and up the hill, making me feel sleepy. We decided to linger a bit. My guide chatted with the caretaker while I explored the grounds. I chanced upon a couple of young girls climbing up a tree and they happily obliged when I asked them for a photo.

The sun was dipping lower in the horizon. We decided to move on to the last place to see in the itinerary. 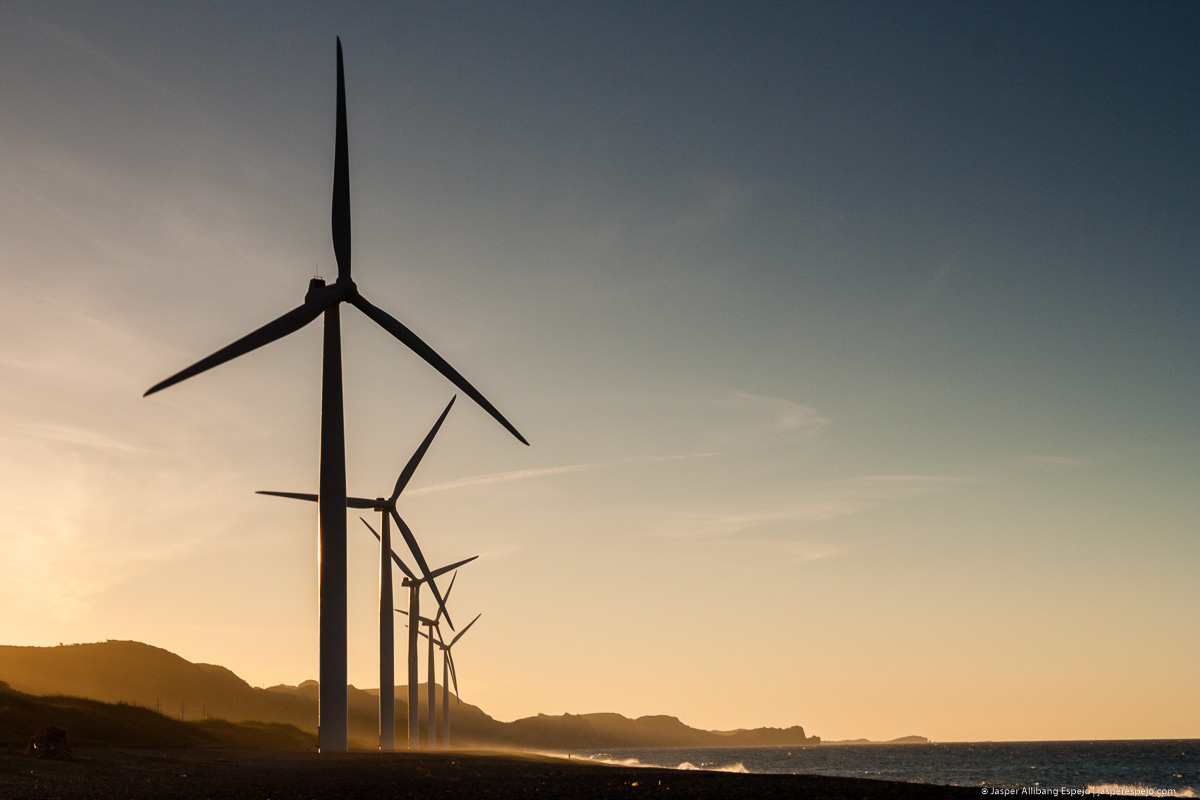 The wind turbines in the town of Bangui were a new addition to the tourist spots of Ilocos Norte. That year five additional turbines were added to the original fifteen erected a few years earlier, making a total of twenty windmills standing aloft in a graceful curve following the shoreline of Bangui Bay. The windmills were so huge that I could see them from Pagudpud beach.

The sun dipped past the horizon and soon it was dark. We decided to end the tour, and my guide brought me back to the resort. I invited him to join me for dinner. The resort did not serve smaller servings of the meals in their menu and I had been wasting a portion of food I ordered, so I thought it was better to have someone to share it with.

My guide told me his life story about growing up in a small town like Pagudpud and how it was hard to earn a living. He wanted to get out and try his luck in some other place. But then he got his girlfriend pregnant, and now he felt obligated to stay and take care of her and their future child.

I also learned that behind Pagudpud’s seeming peacefulness, there was trouble brewing. It seemed that the local powers-that-be were in the middle of a conflict about ownership of prime real estate along the beach, and some group had resorted to hiring armed private guards to patrol the land.

My guide did not stay for long after dinner because he was expected at home. After he left, I ordered a bottle of beer and lingered by the open restaurant not minding the mosquitoes that feasted on me.

It was around 10 a.m. the next day when my parents arrived at the resort. I phoned my father the day before asking him if he and mother were interested in joining me for a couple of days in Pagudpud.

I did not think they would come, but in the morning of November 1, my father texted me early to say they were already in Laoag City. I asked the front desk to move me to a bigger room and told them that my parents were joining me starting that day.

When my parents arrived, we spent the day relaxing by the sea when it was not too hot under the sun. My father was not much of a beach person. He was content to sit on the sand while mother and I took a dip in the warm sea waters.

Another family arrived later that evening, a mother and father, a bit younger than my parents with their two grown-up kids. Soon the newly arrived mom was chatting with us, saying the trip was her daughter’s idea so that they could get to relax from work once in a while. She said they’ve been driving from Manila since dawn that day and had no idea that Pagudpud was so far up north. Their son, whom I suspect did most of the driving, looked annoyed.

We turned in for the night. Our new room was small but had a big double bed for my parents and a single bed for me.

My parents got up early the next day ahead of me. I learned later that they went for a walk by the beach and came across fishermen just returned from the sea. My mother bought several fish which we later gave to the resort staff to cook for us as sinigang.

I also went to the public beach after breakfast and chanced upon the fishermen. Most of their catch was sold by then, but some of the creatures left on display atop their boats, I found interesting. It was my first time to see a sea snake and a blow fish in real life. There was also a huge conch shell which made me wonder if it was an endangered specie and if the fishermen were even allowed to bring it home.

The rest of the day was spent lazing on the hammock under the coconut trees or taking a dip in the waters of Pagudpud. It was the 12th day of my trip and by then I felt like winding down.

On the 3rd day of November, it was finally time for me to go home. I woke up early with my parents. We went back to the public beach to where the fishermen parked their boats with the night’s catch and bought a few kilos of fish to bring home. By 10 a.m., we were aboard a small bus heading for Vigan.

In the afternoon of November 3, 2008, I finally reached home. After almost two weeks of traveling, I felt exhausted. At the same time, I felt thankful for the chance to had seen new places, many of which I have never returned to since then.

Although I would never again take a vacation that long, my trip in 2008 influenced my future travels. It made me lean more towards vacations that are not hurried and done D.I.Y-style (not packaged by a travel agency), although with the help of better mobile internet coverage, a better Google Maps app, the explosion of travel websites and the presence of a planning-obsessed travel buddy, the itinerary of my subsequent travels became much improved. Sometimes, though, I long for the unpredictability that made my 2008 trip exciting and miss the fun of not entirely knowing what happens next. #