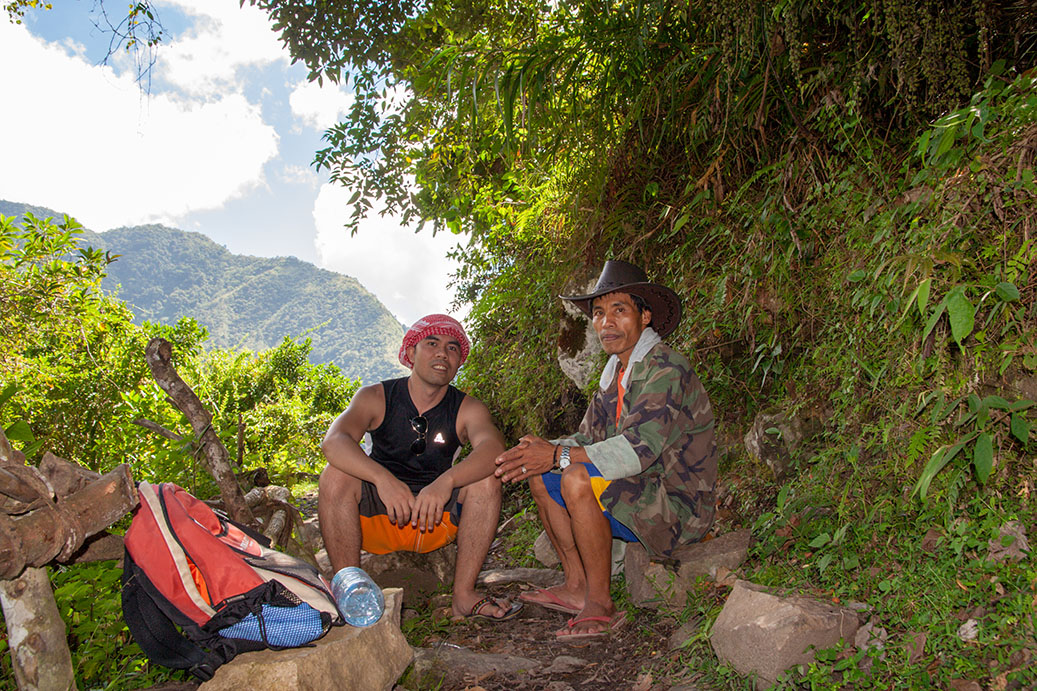 The author with his tour guide on the way to Cambulo, Banaue, Ifugao
by Jasper A. EspejoPosted on October 16, 2018November 9, 2018

I was up by 6 a.m. the next morning. I very much wanted to view the sun rising over the terraces and take photos. The dining area of the place where I stayed had a balcony overlooking the rice terraces. I ate my breakfast and took photos as the sun painted the top of the mountains in gold. Sunlight slowly crept down until it finally revealed the cluster of houses at the bottom of the terraces which were previously in the shadows of the mountains that towered over them.

After eating I went out to bathe in the shared bathroom located outside the main house. It was my first bath since Manila. A couple of other guests were there before me waiting in line. One was a young Filipina, and the other a Cambodian guy. They were part of a group of students from Manila who decided to explore Batad during their semestral break. They invited me to join them to in their trip to Bontoc and then to Sagada, but I explained that I had other plans.

The day before, I requested my host for a tour guide to accompany me on a hike. I met my guide by 8 a.m. and we immediately started walking. He informed me that we were going to trek to another village named Cambulo, have lunch there and then walk back to Batad passing by Tapiyah falls along the way.

We skirted the rice terraces, going westward and followed the ridge of the mountain. I stopped so often to take photos, and my guide politely waited while I did so. He offered to carry my tripod with me. Back in those days, I was still pretty serious about photography and my backpack mostly held my dslr camera and other photo equipments.

We had not gone very far with our hike, but I was already gasping for breath and dripping with sweat. Up in the mountains, I felt the sun sting my skin whenever I was totally exposed in the sunlight, and the cold air when we passed under the shadow of the tall pine trees. Hot and cold alternated as we passed by alternating dense trees and open trail and terraced rice fields.

My guide pointed to one of the fields cut into the side of the mountain and told me that he owned it. He explained that tracts of rice fields were owned and tilled by families, and that these fields were eventually apportioned and passed on to the owner’s sons.

We reached Cambulo just before noon. We roamed around the small village and I took photos. Although many of the houses were already made of concrete and galvanized iron for roofing, there were still a few traditional Ifugao houses used mostly for storage.

I also found a dap-ay. A dap-ay is a structure made of smooth flat boulders arranged in circle. Along the peripheries, the boulders are slightly raised and serve for sitting. The center is slightly depressed and is meant to contain a bonfire. In this structure, the community elders would gather to discuss important matters or simply to gab at the end of the day in the heat of the bonfire.

I learned about the social and cultural importance of the dap-ay when I was a member of the Baguio Arts Guild ages ago. The guild had dap-ays in various properties that members owned in Baguio City, and whenever there were special occasions, we would at some point find ourselves gathered in one of these dap-ays for a night of music, drinks and talks.

While I was taking a photo of the dap-ay in Cambulo, a little girl quietly walked into my camera’s frame, sat on a boulder and smiled. I clicked the shutter and smiled back. Just as quietly as she came, she stood up and left, heading towards the elementary school that we passed by earlier.

My guide brought me to one of the houses in the village where an elderly woman cooked stir-fried vegetables, sans any meat, for the two of us. We rested for a short while after eating, then we began our walk back to Batad.

It was about 4:30 p.m. when we reached the top of the terraces in Batad. The village looked peaceful below. Standing at the very top of the terraces, looking at the small houses and people below— and beyond, range upon range of mountains receding into the distance— I had a sense of how tremendously big the earth was, and I felt very small.

In the mountains, dusk comes early as the sun quickly hides behind the mountains by late afternoon. My guide told me we needed to get going before nighttime overtook us. We walked down the rice terraces, using the stone steps laid down along the paddies. My feet and thighs were starting to feel cramped from walking all day.

We reached the top of Tapiyah falls but I decided not to walk all the way down to the river. The shadows were getting deeper and I realized we had nothing to light our way back to my lodging. I took a few photos of the falls from a view deck, then we started making our way back to the village. To say that my feet were painful at this point was an understatement. I was practically dragging myself up.

Night came upon us while we were in the middle of the terraces. It was sudden, and I remember being surprised how quickly it got very dark. But my eyes eventually adjusted to the darkness and I realized it was not as pitch black as I expected. The night sky was bright with stars and their faint light was enough to guide our way along the rice paddies. In the wild bushes along our way, fireflies blinked and danced. There were so many of them that one tall bush looked like a Christmas tree.

My guide entered the backyard of the first house we came upon and talked to the owners. When he came out, he was holding a burning torch made of pine wood. The light and the aromatic smell of burning pine guided us back to my lodging.

My host rushed out to greet us as soon as we walked into the house. She said she was getting worried because we were late and laughed at the sight of me. I must have looked terrible: the clueless city guy who thought he could handle a day’s hike up a mountain. I thanked my guide while my host quickly prepared my dinner.

Early in the morning of the next day, I met up again with my guide. I arranged for him to accompany me back to the saddle. I was leaving Batad to spend a night in Banaue before moving on with my trip. After two days of hiking, I was loathe to carry my heavy backpack going up to the saddle, so I asked him to carry it for me.

The trek went quicker this time. By 9 a.m. I was back at the sari-sari store where I bought provisions two days before. A jeepney was waiting for passengers going to town. My guide had some business to attend to in Banaue, so he also took the short jeepney ride with me. He deposited me in one of the lodging houses in town, then we said our goodbyes.

In the afternoon, I hired a tricycle driver to bring me to the tourist spots around town. The Banaue rice terraces were magnificent, but I did not like how the view decks were all touristy and crowded with souvenir shops. In fact, the whole town felt touristy.

I also visited one place that had several Ifugao huts restored and made available for accommodation. Aside from seeing the Banaue rice terraces, though, it seemed that there was nothing else interesting to do or experience in Banaue. I was back at the lodging house past 5 p.m. and went to bed early in preparation for my trip the next day.