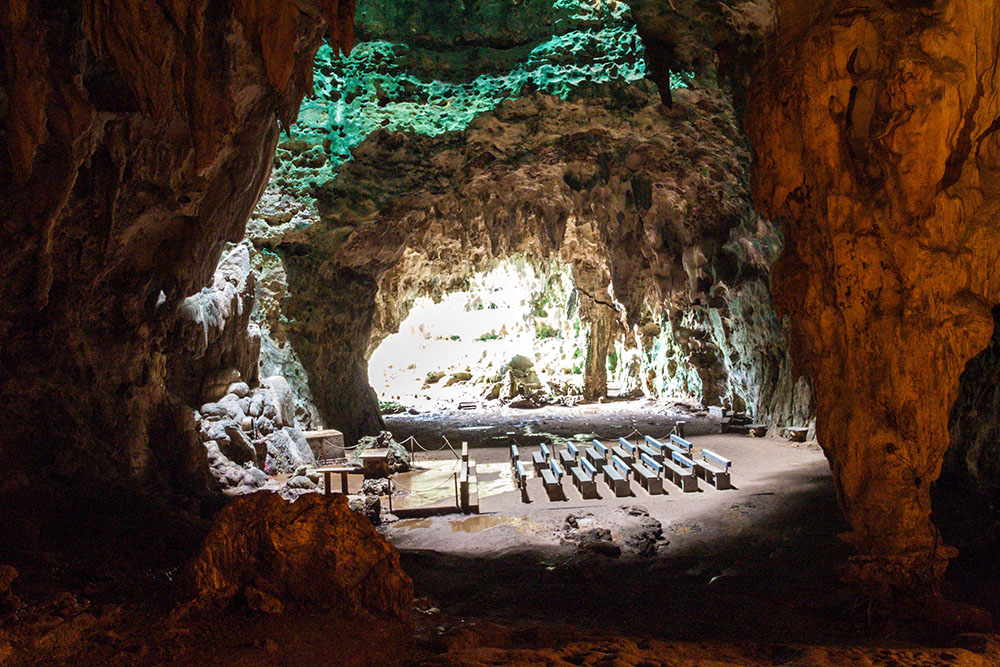 I woke up early the next day to start my trip to my next destination.

When I was planning my journey, I learned that there were buses from Banaue going to Tabuk, Kalinga, and that in Tabuk, there were jeepneys going to Tuguegarao. I thought it would be interesting to take a short trip to Kalinga, just to take a quick look at its capital city.

I took a bus going to Tabuk via Roxas, Isabela. I learned later this was not the best route. It would have been better to take the bus going to Bontoc and Tinglayan. The bus left Banaue before noon. It was an old bus, rusty in places. Its roof was packed with baggage, sacks, vegetables and all sorts of boxes. The bus windows were open, and as we travelled down the highway, the mountain breeze blew inside the bus bringing with it the sweet smell of pine trees and vegetation. 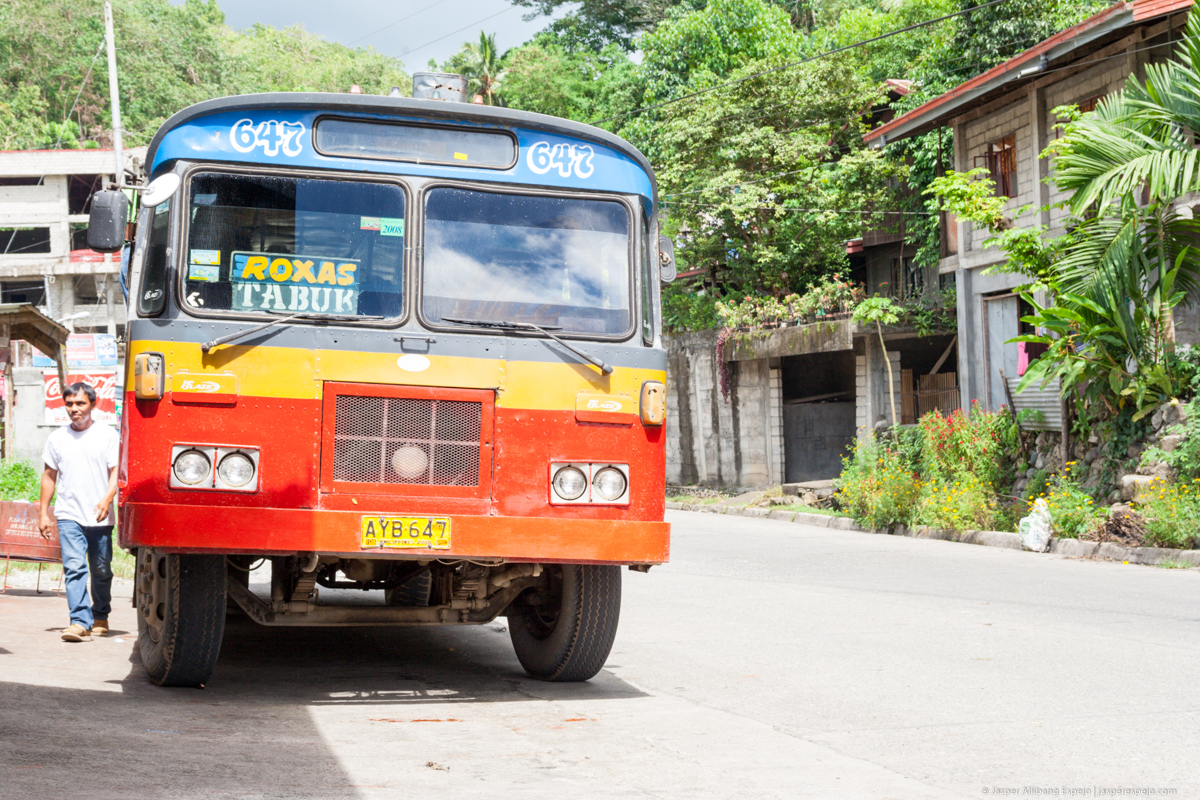 The smell reminded me of the trips we took to Baguio during summer vacation as a kid. The last few kilometers of the journey up Naguilian Road smelled like that, full of the fragrant smell of pine. That distinctive smell, which for me signaled that we were nearing our grandmother’s home, disappeared by the time I was grown up, when the pine trees along the highway grew scant and were replaced by lowland trees, maybe because of disease, logging or climate change.

Soon, the mountainous scenery outside the bus window gave way to smaller hills, and eventually I was back in the lowlands, in the Cagayan Valley. The cool breeze was gone too, replaced with the hot afternoon air which made me feel drowsy.

I dozed off for most of the journey in the afternoon. I remember getting roused from sleep every now and then, when the bus stopped to offload passengers or to take new ones. I also remember looking outside the window at the endless stretch of farmlands and the highway going in a straight line all the way to the horizon. That scene was unchanging for such a long period of time that I imagined we were trapped in a space-time loop and that we would never get to our destination.

It was twilight when the bus stopped to deposit me off the side of a well-paved but empty road in front of a hotel. The building looked new and the façade clean and well-lit, but I felt like it was standing in the middle of nowhere with the dark, lonely highway in front, and the darkening fields and trees surrounding it.

Even the interior looked new and well maintained but save for the security guard and front desk staff who welcomed me, there was no one else around. It seemed I was the only guest. I was given a room which I remember I was impressed with for being new and clean, and cheap for its price.

I went out to ask the guard about the nearest place to eat, but he warned me about wandering out at night. He said it was not safe. I went back to my room and ate the spare bread I bought during that day’s trip since the hotel kitchen was already closed.

The next morning, I went to the hotel’s dining area for breakfast. Two other guests in the hotel were eating too. One of them came over my table for a chat, and I learned that they were from Isabela. They arrived late in the night and were in Tabuk for business.

The guy asked my reason for being in Tabuk so I explained about my trip. By coincidence, he told me that they were going straight to Pagudpud after Tabuk and invited me to ride with them if I liked. I was set on visiting Callao Cave in Cagayan, however, so I declined.

After breakfast, I took a quick tour of Tabuk by riding the jeepneys. It was a small place and nowhere near my idea of a city. There was not a lot to do nor see and so before noon, I was on my way again on board a jeepney going to Tuguegarao. 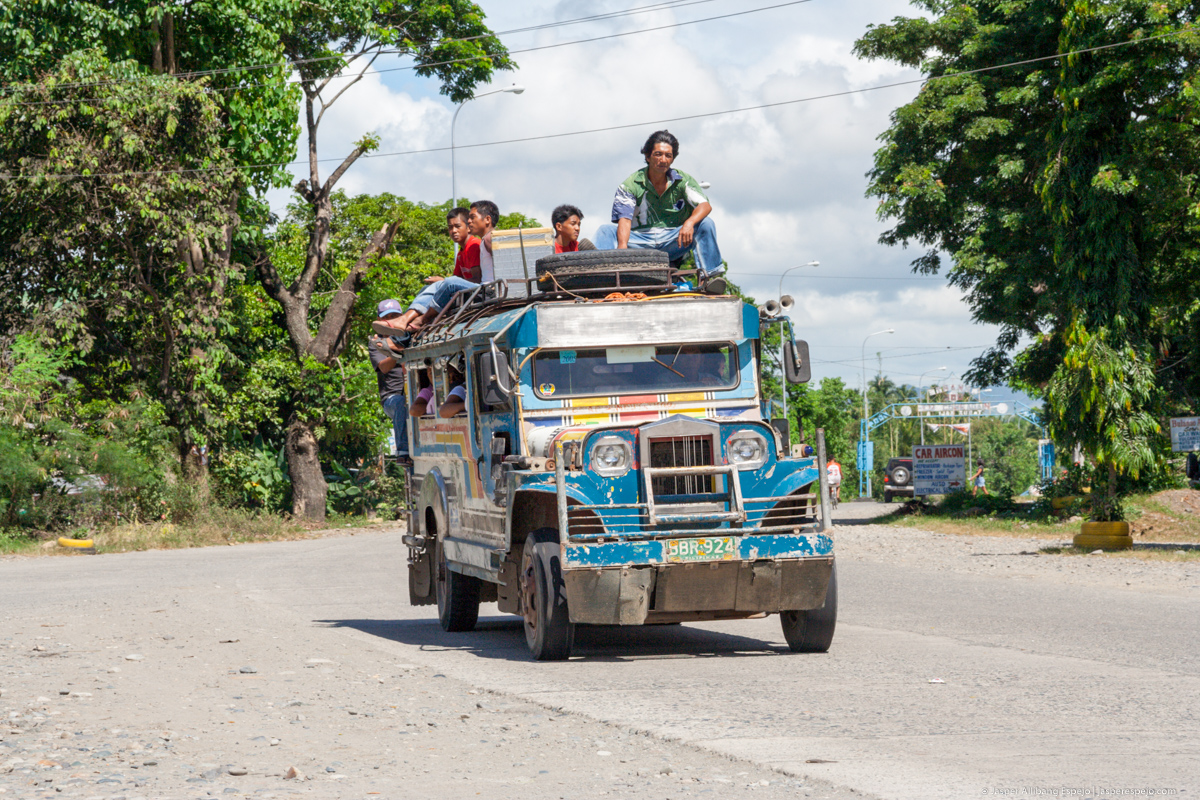 My father used to tell the family about the time he attended a writer’s conference in Callao and seeing the bats coming out of the cave at dusk. The way he told his story, it seemed like an amazing thing to see, so I decided to witness for myself too.

I was in Tuguegarao by noon time. After a quick lunch at the roadside eateries, I hired a tricycle to take me to Callao Cave. It was quite a long, hot ride from the center of Tuguegarao to the Callao National Park on a tricycle.

I learned from my father that they were housed in the cottages of the Callao Cave Resort during the conference. Going to the place, I was not sure if the resort still existed but when I asked the locals for directions, they pointed me to the national park where, it turned out, was the same resort and manned by the local government. The person at the reception asked me if I was staying for the night. I said yes, to my regret later.

I was given a cottage overlooking the river. Upon opening the door, I was greeted by the smell of damp and molds. The bed was covered with thick dust and leaves. There was dirt scattered all over the floor. The toilet was smelly, and it seemed the last person to use it forgot to flush. The resort worker who accompanied me to the cottage asked me to wait outside while he cleaned the room. When he was done, I entered my room again. It was only marginally better.

It was too late to go back to town. The driver who took me there informed me earlier that there were no rides going back to the city after 5pm. Besides, I already paid for the room, so I decided to stay.

I rested for a bit and later went down to the river before sunset. A boy approached me and asked if I wanted to see the bats. I said yes. He said we needed to wait for other tourists to fill his boat. It was very late in the afternoon, and we saw no one else arriving. I was worried I might miss my chance, so I decided to hire the boy and his boat by myself.

The boy took his boat a short distance down the river until we stopped by a narrow strip of gravelly bank. He pointed to a large black hole up a cliff and told me that was where the bats would come out. I set up my tripod and camera then waited. 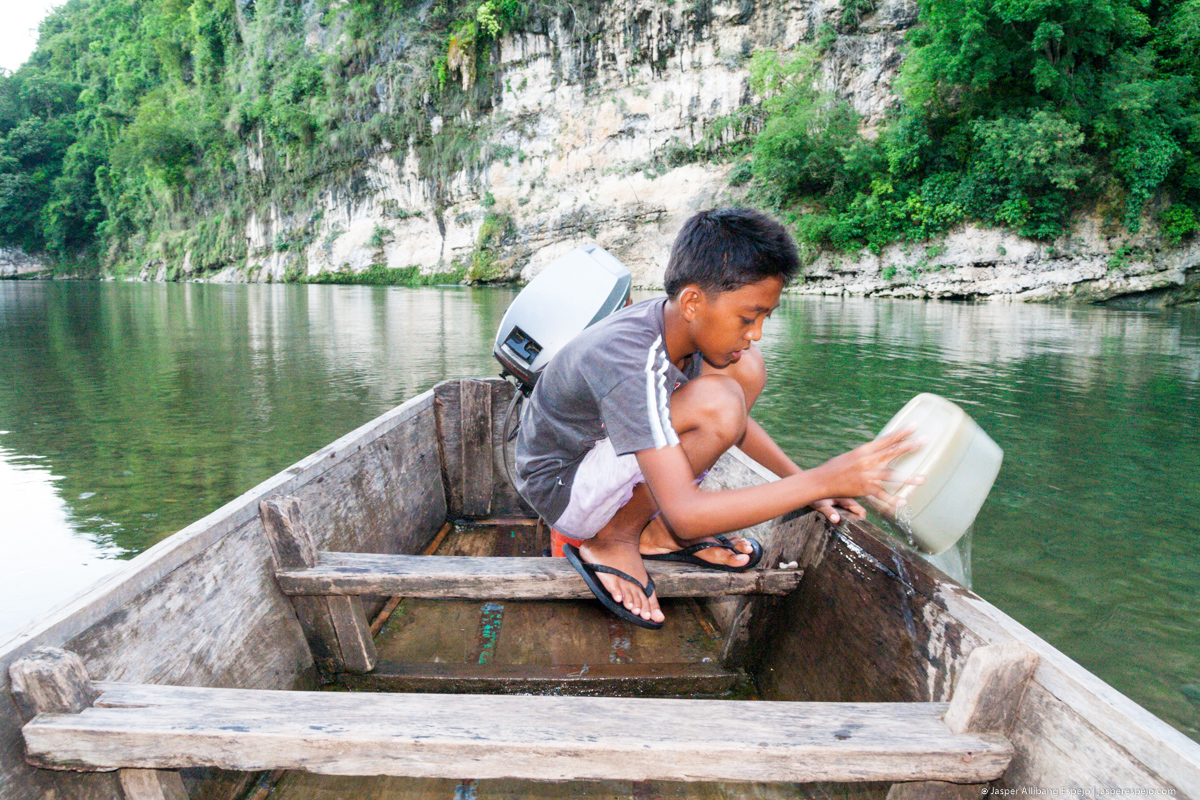 We arrived right on time. A few minutes after I set up my camera, the bats came spewing out of the cave in a blurry mass of gray cloud. The bats swarmed in a way that made it seem they were not a collection of thousands of small flying animals but one single creature that slithered out of the cave. The phenomenon lasted only a few minutes, and eventually the bats dispersed into the darkening sky. I returned to my cottage happy to witness the event.

I spent one sleepless night in that dimly-lit cottage by the river. Throughout the night, spiders of all sorts and sizes crawled up from the floor or fell from the ceiling on to my bed. Although the bed sheet was replaced with a clean one, it turned out that the bed itself was damp and it felt cold and wet on my back. There were all sorts of night noises coming out of the forest too.

As soon as I sensed a glimmer of dawn outside the window, I immediately got up. I felt drowsy from lack of sleep, but the cold morning air was invigorating. The morning was filled with the songs of birds of different kinds. Outside my cottage door, I spied one strangely colored bird repeatedly dart up and down from the trees, perhaps hunting for worms. Monitor lizards scurried on the grass. 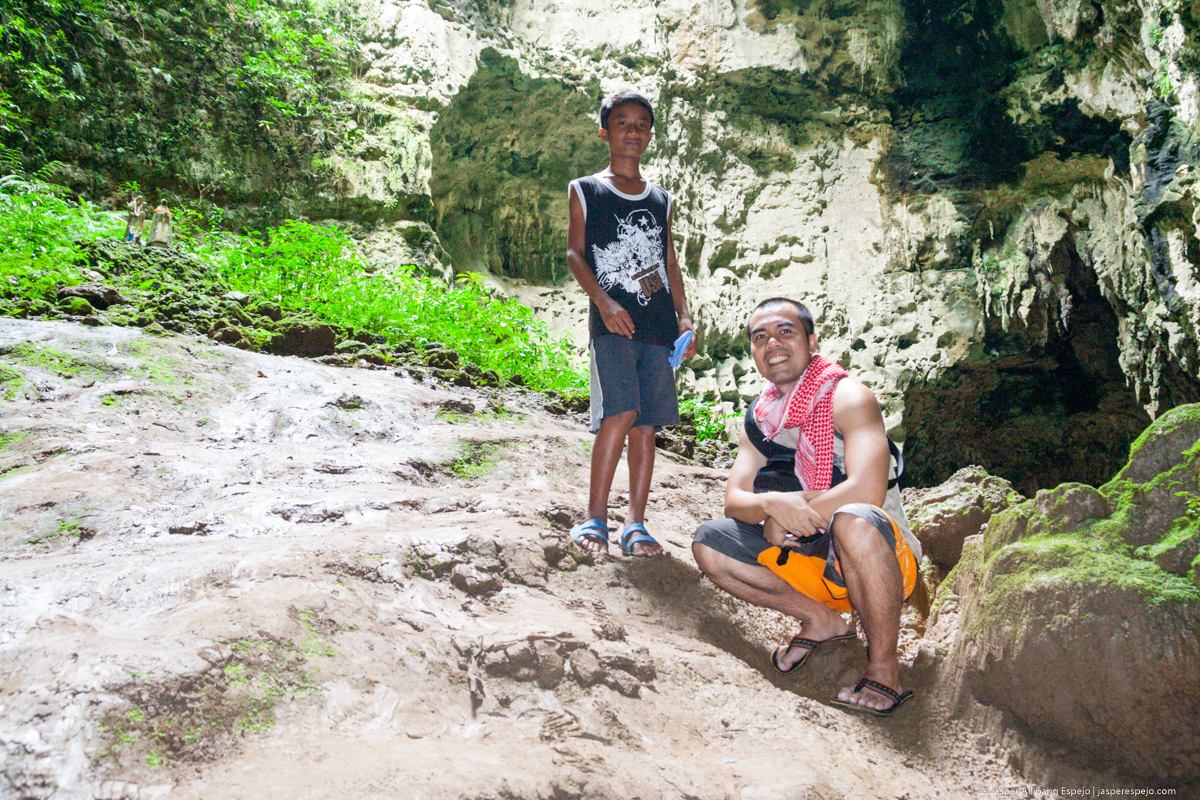 I went back to the river and remembered the last time I bathed in one was when I was a small kid in my mother’s hometown. I took off my shirt and waded into the shallow water. It was too cold. I waded back to the banks and sat on a boulder to dry myself in the morning sunlight. Occasional boats passed me by me.

Later that morning, I took a boat across the river and walked up over a hundred steps leading to Callao Cave. A young boy served as my tour guide and told me about the history of the cave. Inside, I took photos of the chapel. Located in the middle of the cave’s biggest chamber with a natural skylight illuminating the altar from above, the chapel was eerily beautiful.