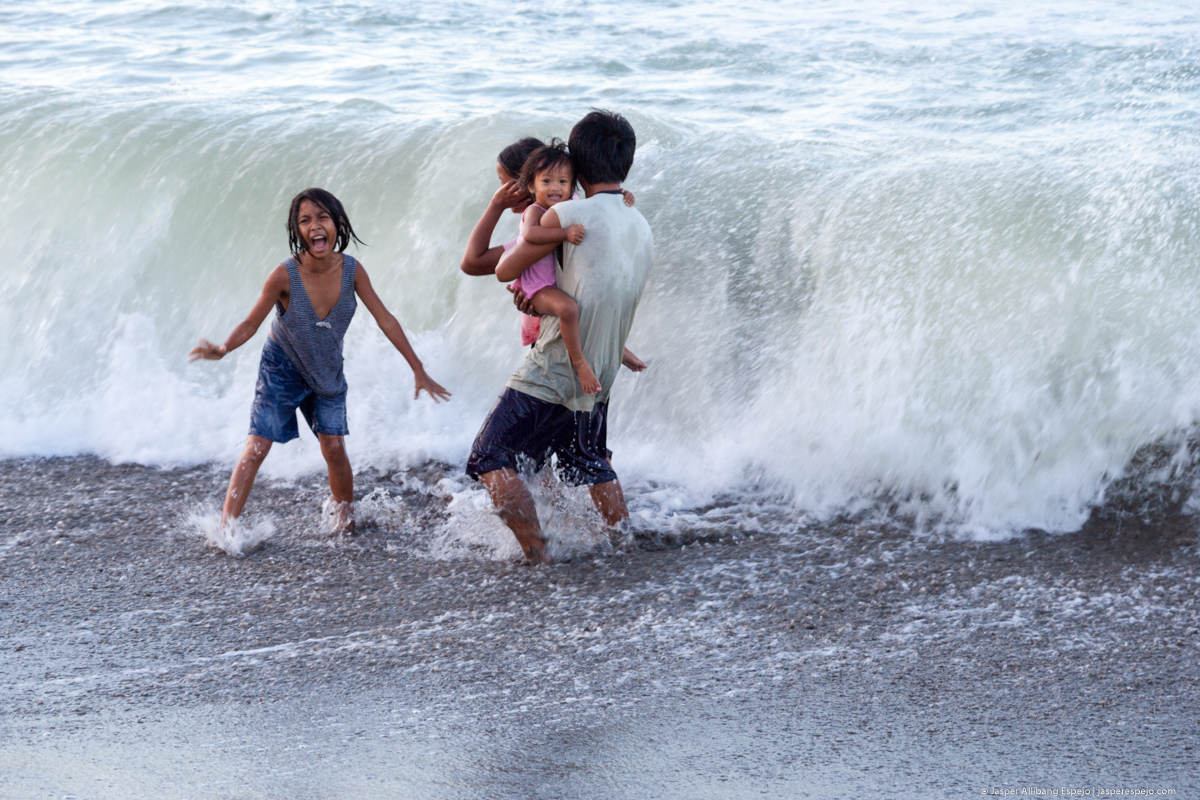 I left Callao resort by noon and was back in Tuguegarao City around 1 p.m. This was already the 27th of October, the day before my birthday. My original plan was to be in Pagudpud, Ilocos Norte by the 28th.

But in Tuguegarao that day, I got worried that it was too late to take a six-hour trip to Pagudpud, which would mean arriving there in the evening. I was not familiar with the place and did not like the idea of looking around in the night time for a place to stay.

I ended up deciding to spend one night in the town of Claveria, Cagayan, which was only three hours away by van. I found a seat at the back of a cramped van and was now heading farther north and getting closer to Ilocos.

I arrived in the town of Claveria in the late afternoon. I asked around for accommodation and a tricycle brought me to a small hotel located along a stretch of road that bordered the beach. The road looked newly cemented and stretched farther westward, but my hotel was the last building standing alongside it, next to two other resorts. Beyond the hotel were empty fields and a view of distant mountains. Even the beach looked empty.

I checked in for one night. It was time for dinner and I was hungry, but to my disappointment I learned from the two girls that manned the hotel at night that they were not able to provide cooked meals as the kitchen closed early. I ended up eating instant noodles.

After that unsatisfying dinner, I ordered two bottles of beer and a bag of chips. Having no one else around to celebrate the eve of my 36th birthday with, I walked to one of the thatched gazebos across the road and had beer by myself. The alcohol made me drowsy and I was asleep by the stroke of midnight.

Early the next morning, I went down to the beach with my camera and saw local villagers gathering by the shore. They had with them a large net stretched on long, thick ropes. Some of the men brought one end of the net far out into the water, riding on a banca. The other end was held by a long line of men and women on the shore. Working together, the two groups– those in the boat, and those on the beach– pulled the ropes to stretch the net across the water while moving back and forth parallel to the shoreline. Later, I found the villagers gathered around the net now piled on the sand to pick the fish that were caught in them.

Perhaps because I was getting tired from six days of traveling or was scared of traveling on my birthday, which according to old folks was bad luck, I decided to stay one more day in Claveria. I spent the rest of the morning hanging out on the beach and taking photos until the sun was too hot on my skin.

I went back to the beach when the sun was setting, and the air was cooler. The locals were gathering by the shore to enjoy the view of the sunset and feel the cool breeze. Seeing the camera hanging around my neck, a group of rowdy kids started posing in front of me and never stopped playing antics until an elderly woman up the road called them to come home.

Earlier that day, new guests arrived in the hotel, a group of four guys. They came in a delivery truck with the name of a big liquor brand plastered on its side. One of the guys chatted me up and I told him about my trip, how I was supposed to be in Pagudpud for my birthday that day but was too lazy to take the trip.

In the evening I was surprised when they guy whom I chatted with earlier came over to where I was eating my noodles, holding two tall bottles of rum. He told me no one should spend his birthday alone. That was how my birthday ended in the company of friendly strangers, chatting and drinking under the gazebo until most of us passed out.

I do not remember how I managed to get to my room that night. I only remember waking up the next morning with a splitting headeache. The sales reps left early in the morning. I took a late breakfast, then decided I was too hung over to take the trip to Pagudpud so I extended my stay for another night.

Later that afternoon, as I lazed in the hotel’s porch reading my book, a young girl in her teens arrived in a tricycle. She looked pretty, and I gathered from the conversation I overheard while she talked to the hotel staff that she was from Manila. She took the room next to mine.

Afterwards, a good-looking boy also in his teens arrived and knocked on the girl’s door. They stood conversing by the porch next to my room and I could hear their conversation clearly as I returned to my room and lay in bed trying to take a nap.

It learned that the two were chatmates and the girl came all the way from Manila to meet him. She said that this was the farthest she had ever gone up north and she did not imagine Claveria to be that far away from Manila.

The boy must have left because the voices grew quiet and I fell asleep. Not long after, I was awakened by loud voices coming from the girl’s room. It sounded like an adult male voice shouting angrily. The sound was muffled by the dividing wall between our rooms, but I could hear snippets like: hindi ka na nahiya, kababae mong tao, your parents are worried sick…

It was getting late in the afternoon, I decided to go back to the beach one last time. I stepped out of my room with my camera and noticed a latest-model sedan parked outside my room’s porch. As I went down the few steps to the hotel’s small parking area, a SUV screeched to a halt by the road outside the hotel, and there came spilling out a couple of small boys shouting with malicious glee: lagot ka kuya, galit sina mama at papa! Behind them followed an angry-looking middle-aged guy, perhaps the father, a middle-aged motherly-looking woman, a grandfather and a teary-eyed grandmother.

I looked back, the teenage boy was standing frightened outside the door of my neighboring room. So, he had not gone home after all. I thought it was best to leave the family with their brewing drama, so I crossed the street and made my way to the beach. 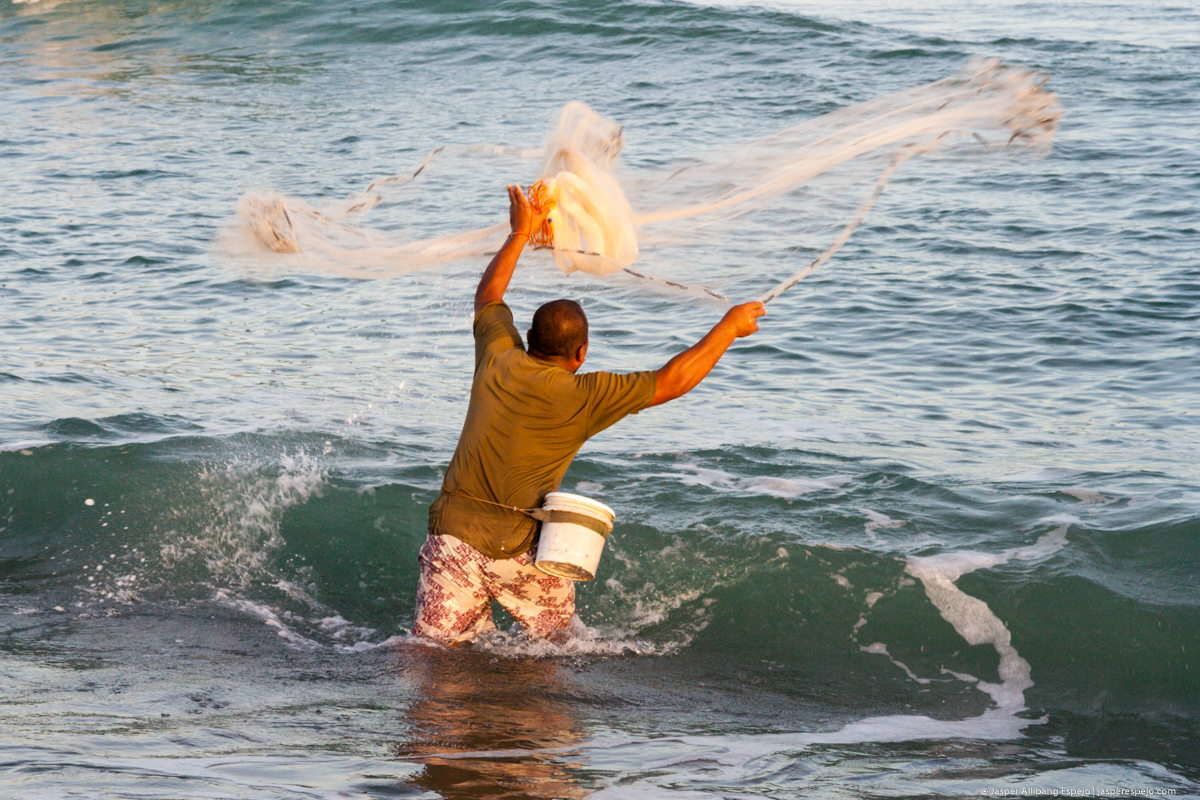 By the time I returned to the hotel in the evening, the room next to mine was empty and through the open door, I could see the two girls, who it seemed were the only hotel staff, cleaning up the inside.

With my head still hurting a little, I decided to go early to bed. I was determined to leave for Pagudpud in the morning.