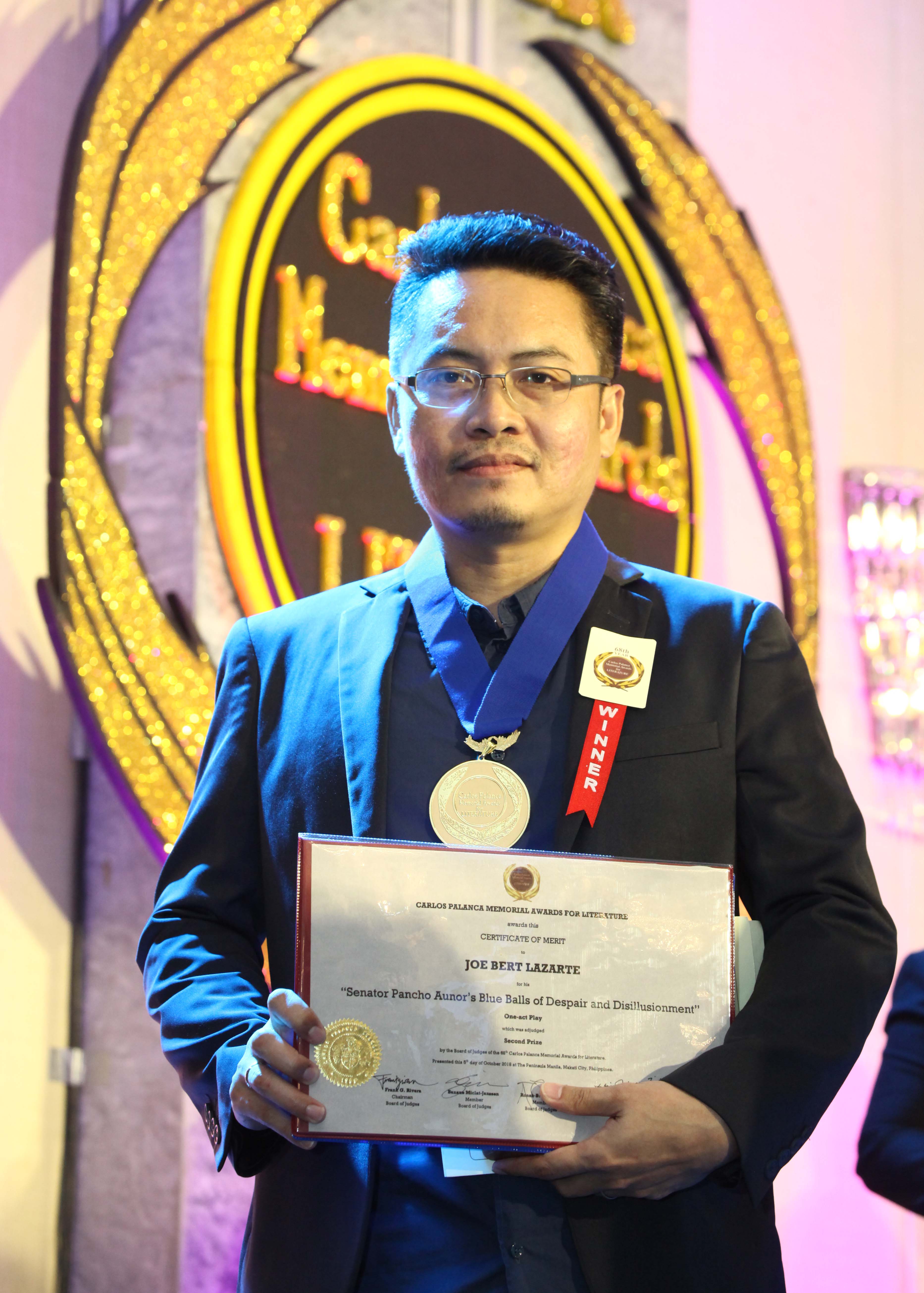 MAKATI CITY – How does one develop the discipline to be a writer in this age of social media and blogs? For this three-time Palanca awardee, it has to do with choosing reading over spending time aimlessly scrolling on social media. If you ask his advice to aspiring writers today, it’s to own an e-reader that can hold multiple titles and allows one to read anytime, anywhere. That and writing daily.

Joe Bert Lazarte is one of only two winners of the 68th Carlos Palanca Memorial Awards for Literature who bagged two prizes in separate categories. He won first prize in the Short Story category for Describe the Rapture and second prize for the One-Act Play Senator Pancho Aunor’s Blue Balls of Despair and Disillusionment.

A senior creative communications manager for an integrated resort, Lazarte mostly wrote his winning pieces during free weekends. He cites celebrated writer Stephen King as his ultimate peg, writing 1,000-1,500 words a day, even without inspiration. Even if it’s “crap,” as he puts it, he keeps it in a page and edits or revises from there.

“It’s a commitment. There are times when I have some space in the office, so I get to put in 500 words a day. I feel empty when I’m not doing literary work. If it’s all work, I feel like I’m neglecting something important,” Lazarte said.

While he gets story ideas from everywhere, Lazarte said he always makes it a point to write with the national psyche in mind.

“For the Palanca, I try to have something that would resonate with the national psyche. It has to be of national significance. For example, a revolution is not purely revolution. There’s a love story there somewhere,” Lazarte said.

True enough, Lazarte’s short story Describe the Rapture is about a freelance copywriter tasked to write the brochure copy for Torre de Manila, infamously dubbed as the national photobomber. Lazarte said he found inspiration for this story from a lot of things. Himself a freelance writer for 12 years, all the ambiance and moods he had writing at home ─ alone ─ all figured in the story.

“It started as a draft in 2005 and it evolved over the years. I was looking for something to complete it, then I saw The Shape of Water. One of the minor characters is a freelance artist who always got his work rejected. I liked the character. He was alone in the world and his only friend was his female neighbor. To make it more significant, I looked for a national issue and decided on Torre de Manila,” Lazarte said.

Lazarte started joining the Palanca Awards five years ago and despite not winning in the first three, didn’t stop until his time came. Last year, he won third prize for his short story, Don’t Blink. It was his first time writing a One-Act Play for the 68th Palanca Awards and felt “awesome” when it got the judges’ nod. He revealed that he plans to keep writing and joining the competition until he gets about a hundred of them. (CID Communication)

Named after businessman and philanthropist Don Carlos Palanca Sr., the Palanca Awards continuously seeks to cultivate Philippine Literature by providing incentives for writers and serving as a treasury of these literary gems. It is considered the gold standard in writing excellence, highly-coveted by Filipino writers, young and old alike. For complete list of winners, visit www.palancaawards.com.ph.