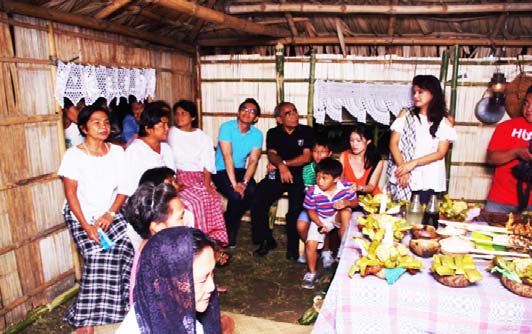 TUMBA FESTIVAL. Visitors, including Ilocos Norte Governor Imee Marcos (far right in white), observe elderly folks chanting prayers in front of food offerings for the dead during the centuries-old cultural tradition known as "Tumba" in the town of Paoay on November 2.
by Grazielle Mae A. Sales, PGIN-CMOPosted on October 28, 2013October 14, 2019

PAOAY, Ilocos Norte – A cultural tradition that  shows the residents’ distinct way of honoring the spirits of the dead  has been adapted as one of the highlights of the Halloween celebration of Ilocos Norte during the Semana ti Ar-Aria (Ghost Week).

Dubbed as “Tumba”, this festival is practiced every All Souls’ Day (Nov. 1) wherein residents prepare for the festival and setup their “tumba” and mock burial grounds immediately at twilight, right after arriving from their visit in cemeteries.

The “tumba” or platform is usually laden with “umras” or offerings for the dead. “Umras” usually includes cigars, betel nut, “basi” or local sugarcane wine and “atang”, an offering of indigenous Ilocano delicacies to be served to those who gathered together to join and recite prayers.

A religious icon, such as a patron saint or another holy image preferably the Crucifix is also enshrined, with flowers and candles surrounding it.

Old women who are usually dressed up in “baro’t saya” or the traditional Filipino blouse and skirt ensemble to give an old-world ambiance to the exhibit recite prayers and sing religious songs.

While some say that the festival marks a solemn reunion among the living and their dead loved ones, James Galano, tourism officer of the town of Paoay, said that the festival is originally a form of atonement for the spirits of the dead which are believed to be trapped in the purgatory, making it an activity “to pray for the dead”.

Every barangay prepares its own exhibit wherein they decorate a particular house to make it look creepy.

According to Galano, the municipality of Paoay recently turned this tradition which had spanned for centuries into a competition to maximize  rits potential in tourism.

Now, the festival-competition strategically commenced around the town’s heritage area, with a group of judges visiting the exhibits and rate them accordingly based on creativity and “horrifying” impact.

Galano also added that through the festival, they are again expecting thousands of visitors in Paoay this coming November.

Tumba Festival kicks off this November 1 with the opening of last year’s “blockbuster” Paoay House of Horror, a convent ruin which was transformed into a horror house for an all-out Halloween entertainment for Ilocanos and visitors.