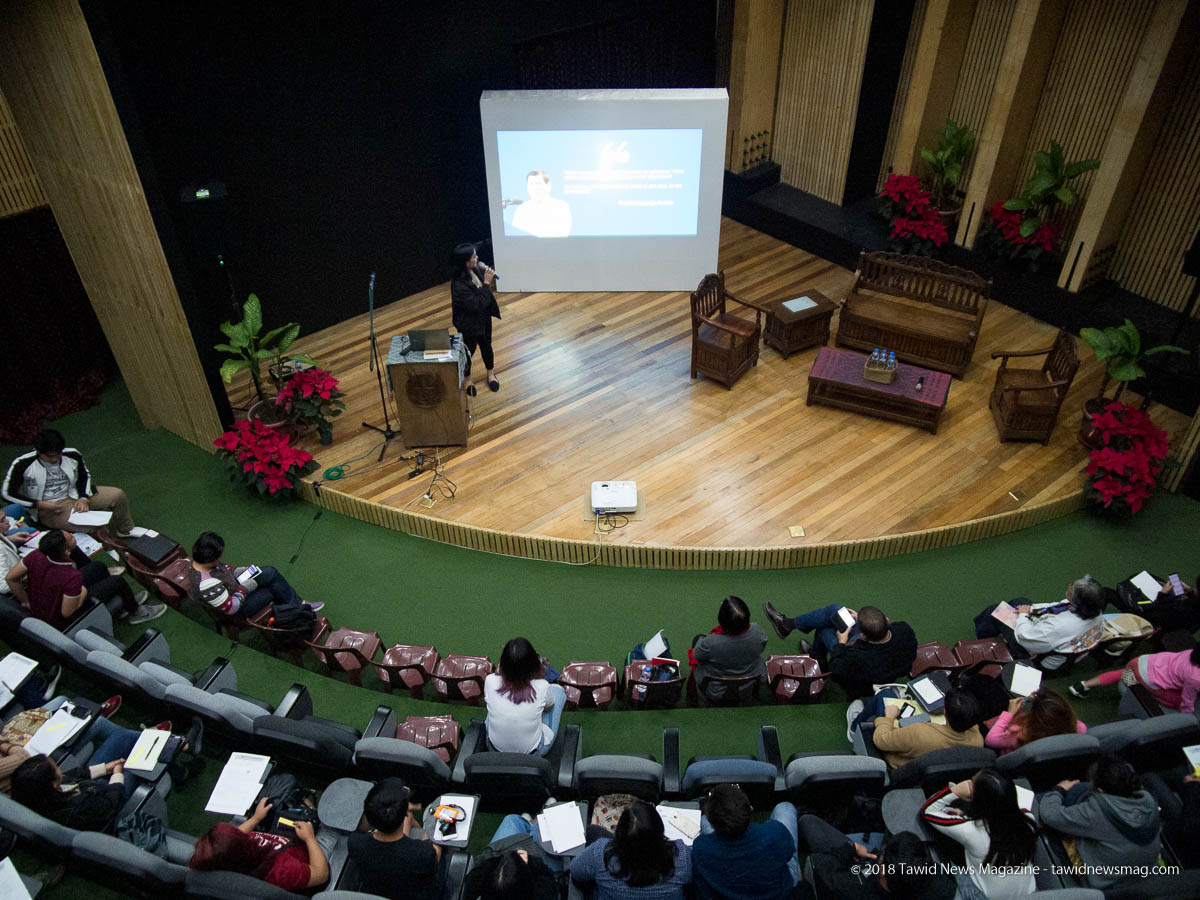 This is one of the messages that speakers conveyed to the journalists, students and academics that gathered in the Teatro Amianan of the University of the Philippines-Baguio last Feb. 1-2, 2019 for the “Democracy and Disinformation” forum hosted by the Department of Communication, College of Arts and Communication (CAC) of UP-Baguio in partnership with the Consortium on Democracy and Disinformation.

In his welcome remarks, Chancellor Raymundo Rovillos of UP-Baguio said that disinformation presents a clear and present danger to society and democracy.

“Evidence-based institutions like (the media) have the expertise and commitment to stand by for the truth. The media remains a pillar of democracy, and because it is under threat, we must be prepared to defend it,” he said.

Dean of UP-Baguio, Prof. Jimmy Fong, in his opening remarks, deplored the dominance of infotainment like the trending of AlDub or Kris Aquino in social media. He said that he considers this as another form of disinformation because it distracts people from more important issues.

Ellen Tordesillas, President of Vera Files presented how her organization fact-checks posts on Facebook. Vera Files is one of the three official third-party fact-checkers of Facebook in the country, along with Rappler and Agence France Press Philippines.

She explained that Vera Files does not delete posts but simply flag them as fake, false  claims, misleading or satire. Facebook drops posts flagged as fake to the bottom of newsfeeds so that they cannot be easily seen by other users nor monetized by the posters.

Facebook does not want to be the “censor of the world” and is careful about preserving freedom of expression, Tordesillas said, to explain why flagged posts are not immediately blocked or deleted by Facebook.

She also revealed that after analyzing the ad codes in hundreds of fake news sites, her team uncovered that the sources point to a few individuals or groups who are making money from the ads.

“Fake news clouds our decision making. By exposing what is the truth, you help people understand issues and you hold accountable institutions and individuals wielding power,” she said.

Sherwin de Vera of Northern Dispatch discussed how disinformation is used as a tool for repression by the state not just against prominent political opposition figures but also against local journalists. De Vera narrated his experience being tagged as “communist” by the Department of Justice along with more than 600 others in a list that was widely criticized for including environmentalists, human rights defenders, priests and partylist lawmakers.

De Vera provided examples of how disinformation is used to influence public perception to make government actions more acceptable. He presented how a series of orchestrated manipulation of information fed to the media eventually led to the establishment of a military infantry in an area where a big government dam was to be built in an interior town of Ilocos Sur, despite the lack of evidence of communist infiltration in that town.

In the panel discussion on the first day of the forum, Prof. Jason Paolo Telles of the UP-Baguio CAC warned that “disinformation in various forms is a threat to the public’s ability to trust legitimate press outlets, and ultimately the ability of the press to serve its role in preserving democracy because of the accusations that the media is biased or ‘bayaran’.”

He added that disinformation undermines our right to communicate and to make informed decisions which are essential in democratic activities like elections. If people are not equipped with accurate information, they cannot be effective voters, he said.

Telles also touched on the effect of disinformation on education. He stated that false information in social media can pollute a student’s learning, citing as an example the case of a student arguing with his science teacher that the Earth is flat. The “flat-earth theory,” an antiquated theory which claims that the Earth is shaped as a plane or disk, has found resurgence in modern times and a large following because of social media.

He also warned that Wikipedia, a favorite source of information by students and teachers, cannot always be trusted because it is vulnerable to “Wikipedia wars” where the wiki entries are revised to favor certain individuals or groups.

Kimberlie Quitasol of Northern Dispatch stated that disinformation is nothing new, and has existed even before democracy was established. “It has been in the arsenal of tyrants and rulers in conquering nations, maintaining status quo and perpetuating themselves in power,” she said.

In another discussion, Kathleen Okubo, Editor-in-chief of Northern Dispatch, and John Nery, columnist of the Philippine Daily Inquirer, tackled the question whether media practitioners are witting or unwitting agents of disinformation.

Okubo said that the free flow of information is “greatly affected by the contents of our stomach,” explaining that the economic needs of poor journalists may make them more susceptible to transmitting false information. But Nery stressed that there are also rich journalists who peddle false information, because of greed or because they see themselves as part of the ruling class.

Prof. Rolly Fernandez, commenting from the audience, lamented that media practitioners have become “lazy” by simply accepting whatever information the government agencies, police or military send out without checking the facts. But journalists are not sponges, he said, and should not just absorb everything but should check and re-check information handed to them.

In the afternoon, Nery presented the results of a study “Architects of Networked Disinformation” authored by Filipino scholars in foreign universities. The study revealed that politicians employ “boutique” advertising and small PR agencies to craft disinformation campaigns. These agencies hire digital influencers who have a wide fan base, and also subcontract lowly-paid middle-class operators with the task of setting up fake accounts in social networks. At the bottom of this hierarchy are the politicians’ fan page moderators, unpaid opinion leaders and volunteer political organizations.

Celine Samson detailed the steps she takes at work fact-checking Facebook posts at Vera Files. She divided the audience of mostly campus journalists into six groups and gave them real-life news snippets to fact-check. Each group later presented their findings on stage and the group with the best presentation received a “prize” of Chocnut.

Samson continued the workshop on the second day, teaching the audience how to spot fake, false or misleading posts on social media using an interactive game. She encouraged everyone, even non-journalists, to fact-check because “anybody can do it; one just needs to know what to look for and what tools to use.”

In the discussion, Kitasol, raised a point that since the purveyors of disinformation are systematically organized, those who are speaking against disinformation should also close ranks. Abalos ended the panel discussion by asking participants to commit towards fighting disinformation.

Finally, Tordesillas closed the forum by summarizing the takeaways from the two-day event.

“As fake news confuses the citizenry, truth gives the citizenry the clearer mind to make good choices (in the coming elections),” she said in her closing remarks. ●