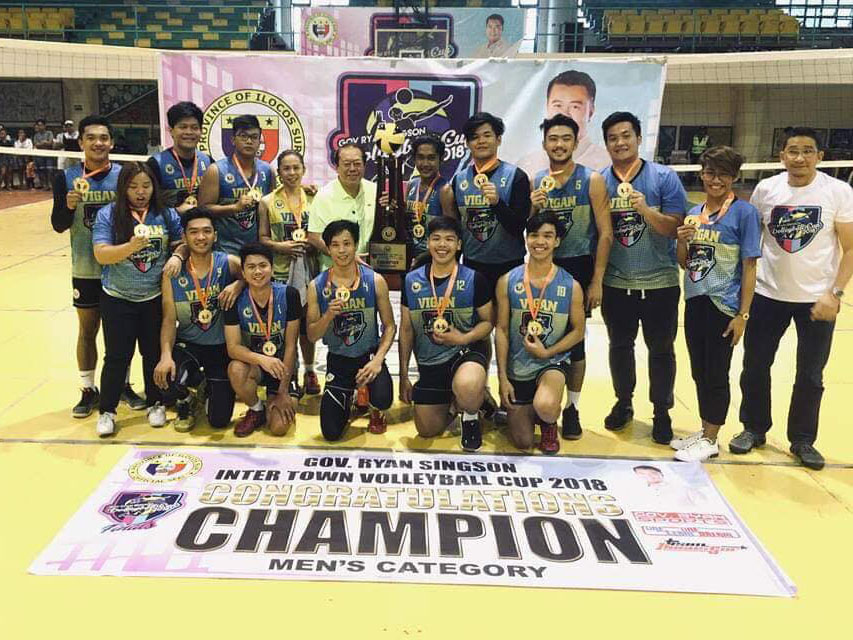 VIGAN CITY – What a surprise for this city’s volleyball men’s team – when they won the championship in this year’s Governor’s Cup Governor Ryan Luis V Singson Volleyball Inter-Town Volleyball Tournament 2018 that ended on December 29, 2018 at the People’s Coliseum in Santo Domingo town.

Vice Governor Jeremias “Jerry” C Singson awarded the trophy and a huge replica of the P100,000.00 check of the winning team for this year’s 21 and below volleyball men’s champions.

Vigan team won the championship in 2015 during the maiden tournament where they won their first P100,000, and special awards for Best Setter and Most Valuable Player.

Singson urged the winners and all the athletes that competed in the event to keep on believing in themselves and continue in getting involved in sports and other activities that help them away from illegal activities.

James Victor Reolalas, 27, the coach of Vigan team, expressed gratitude to the supporters of his team, especially the parents and families, for believing in their children, pushing them during rehearsals and actual games from October 6 to December 29.

Cabudol also thanked everyone, every group that supported the tournament, inviting residents and visitors to the fifth season in 2019.

In 2015, Gov Singson, a sports lover, initiated the first Governor’s Cup Inter-town Volleyball Tournament to give chance for further enhancement of the talent of the province’s young volleyball athletes. This program also seeks to push the youth from illegal activities, give them chance to discover their strength and courage in sports, develop sportsmanship, self-discipline and friendship among fellow youth. (Imelda Castro-Rivero/PIA Ilocos Sur)