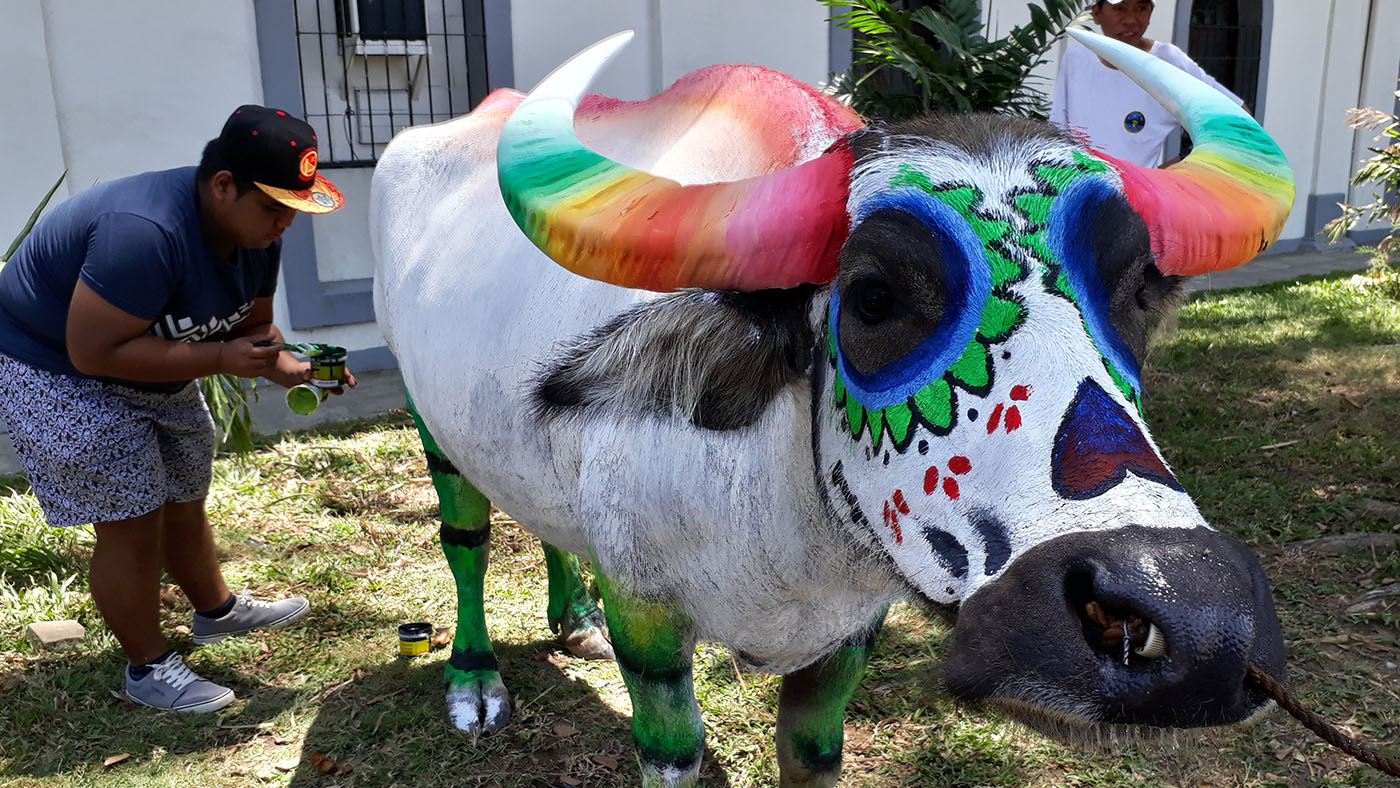 A contestant paints his art on the entire body of his living canvas during the Binatbatan Festival carabao painting contest held on Apr. 27, 2019 along Plaza Salcedo in Vigan City, Ilocos Sur.
by Imelda Castro-Rivero/ PIA1 Ilocos SurPosted on April 27, 2019April 27, 2019

Go back to where the festival came from and understand the miracle that saved the residents in December 1882.

Viva Vigan Binatbatan Festival of the Arts celebrated from the last week of April to the first week of May was originally the Feast of the Natives that began on May 3, 1883, according to the writings of Damaso King, well-known Vigan historian.

The festival began when an epidemic killed 934 residents in a month in 1882. The epidemic started Nov. 12 and ended Dec. 15. This happened 30 years after a chapel was built in 1852 in the cemetery of Vigan.

The huge number of deaths in such short time alarmed the naturales or native inhabitants and mestizos or residents with Spanish blood that they asked Dr. Evaristo Abaya, the parish priest to request for the visit to Vigan of the Santo Cristo Milagroso of Sinait town.

The Santo Milagroso was venerated by the people with a nine-day novena. As the novena progressed for days, the number of deaths decreased, and on the last day, the epidemic stopped.

The people glorified God for the miracle. Almost all residents attended the Holy Mass in honor of Santo Cristo. In gratitude, the naturales of Vigan chose the third day of May as thanksgiving day for Santo Cristo whom they call Apo Lakay. This is the feast day of the Holy Cross and the Santo Cristo of Sinait town.

Since then on Fridays and third day of May, people have been going to the cemetery chapel called Simbaan a Bassit to hear Holy Mass and continue their devotion to Apo Lakay.

Viva Vigan Festival is the fruit of the reunion of residents staying in Metro Manila who formed a group called KaiVigan in 1993, said Antonio Florentino, descendant of Leona Florentino, the first poetess of the country, when he was still the secretary to the mayor in the early years of the festival.

Yearly they celebrated Tres de Mayo for two to three days. The longer they stayed in their hometown the more they promoted it as an interesting tourist place.

In 1995, when Eva Marie S. Medina became the the town mayor, she continued the group’s campaign to promote Vigan and so Viva Vigan Festival of the Arts was born.

However, in 2002, Binatbatan festival was introduced to celebrate one of the industries that kept residents alive – abel Iloco hand-loom weaving. Binatbatan is the process of beating cotton pods to remove the seeds.  This is shown through the Binatbatan street dancing and showdown.

This is the third festival of this city this year, the first is the Vigan Cityhood anniversary featuring the Longanisa Festival on Jan. 22, and the Vigan City fiesta on Jan. 25 in honor of the city’s patron saint, Saint Paul the Apostle.

Medina is inviting Filipinos and foreign visitors to experience the miracle of Tres de Mayo in his city, enlisted by UNESCO as World Heritage City in 1999, and one of the New Seven Wonders Cities of the World in 2014. ●