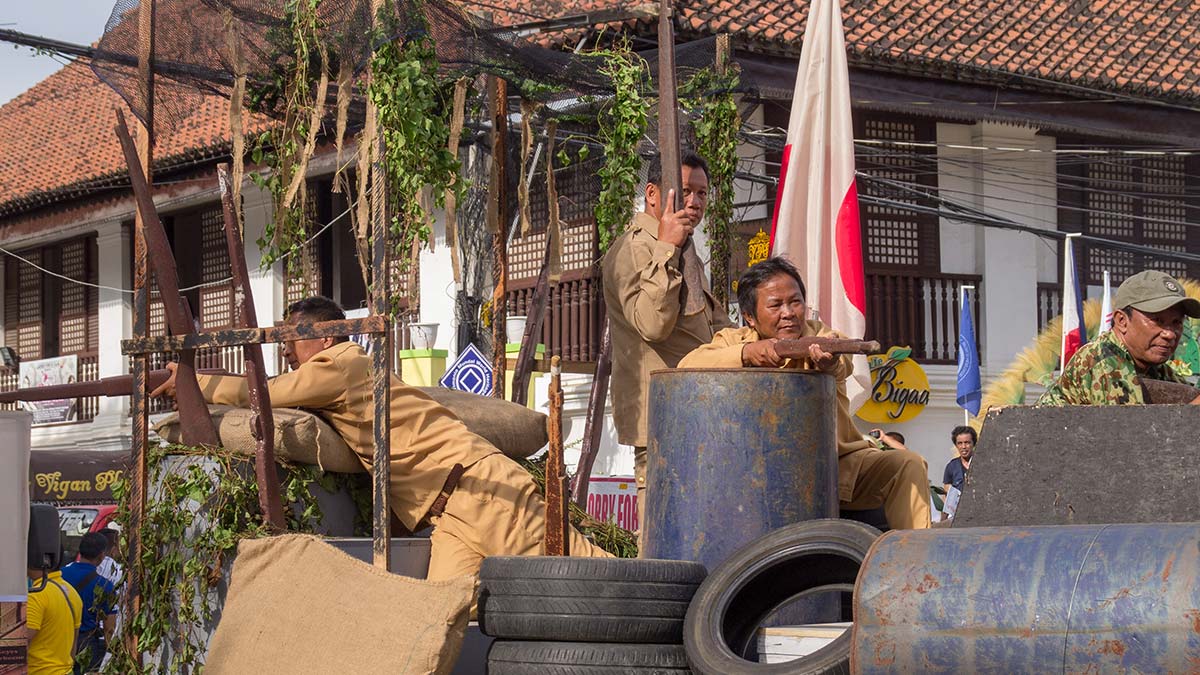 SOLIDARITY FESTIVAL PARADE. Chapters from Vigan history, like the Japanese Occupation in World War II, are re-enacted in the parade of floats during Solidarity Festival in 2018. (photo by Jasper Allibang Espejo)
by Imelda C. Rivero / PIA Ilocos SurPosted on September 4, 2019September 4, 2019

To preserve the heritage of the city, the city government established an event where all of its residents called Biguenos come out of their ancestral or modern-age houses to join other residents of Ilocos Sur to once more relish the Ilocano culture and the history of Vigan through songs, dances, stage plays, literature, street drama complete with floats, said Mayor Juan Carlo S. Medina.

On this day Biguenos gather at the Saint Paul Cathedral for the Solidarity Mass, and to renew their Pledge to Heritage Conservation. After this they unite in a breakfast at the city hall. And in the afternoon, the history of Vigan comes alive via a parade of floats showing the different periods starting from the entry of Chinese merchants to the coming of Spaniards, the Japanese, the Americans, the indepence of the country, until the city was listed as a World Heritage City and one of the New Seven Wonders Cities of the World.

A one-day celebration is not enough to showcase the heritage of the city, so the city government under then Mayor Eva Marie S. Medina made the whole month of September as World Heritage Cities Solidarity Cultural Festival.

Preserving the Ilocano culture includes bringing to life the history of the city. This will be done through a stage play on the life of a Philippine hero born in Vigan City, Father Jose Burgos; review of Vigan history called repazzo de Vigan parade of floats; retelling the city’s history to the youth by elderly Biguenos called historia oral, said Edred Piamonte, the city events officer.

He added that this year the bucanegan is included, the repazzo de Vigan is a float parade, and most of the events is held at the Vgan Convention Center and Vigan Culture and Trade Center on Fridays, Saturdays and Sundays of September.

In the Philippines, Vigan is the only World Heritage City, although UNESCO listed three natural sites such as Mount Hamiguitan Range Wildlife Sanctuary, Puerto Princesa Subterranean River National Park and Tubbataha Reefs Natural Park; and three cultural sites that include Vigan City; the four Baroque Churches in Manila, Santa Maria, Paoay, and Miag-ao; and the Rice Terraces of the Cordilleras.

In December 1999, Vigan City was listed in the UNESCO World Heritage List of Sites and Monuments as the city, established in the 16th century, is the “best-preserved example of a planned Spanish colonial town in Asia. Its architecture reflects the coming together of cultural elements from elsewhere in the Philippines, from China and from Europe, resulting in a culture and townscape that have no parallel anywhere in East and Southeast Asia.”

Vigan’s Heritage Conservation Program was the best of the 28 submissions of best practices worldwide because of its good management practice achieved with relatively limited resources which makes it adaptable by other world heritage site managers,  its strong local community participation in the conservation and management of the site, and the development of unique multi-faceted conservation scheme of the site.

In 2014, the city was named as one of the New Seven Wonders-Cities of the World and was officially inaugurated as such on May 7, 2015.