LAOAG CITY – The Kabataang Makabayan (KM)-Ilocos and Pambansang Katipunan ng Magbubukid-Ilocos has claimed responsibility over the defacement of a bust of former President Ferdinand Marcos at the Ilocano Heroes Walk in Laoag City.

According to a statement released to the press by KM-Ilocos last September 4, members of the group poured red paint on the monument as their response to the claim of Ilocos Norte Gov. Imee R. Marcos that millennials have moved on from martial law and that the rest of the country should too. 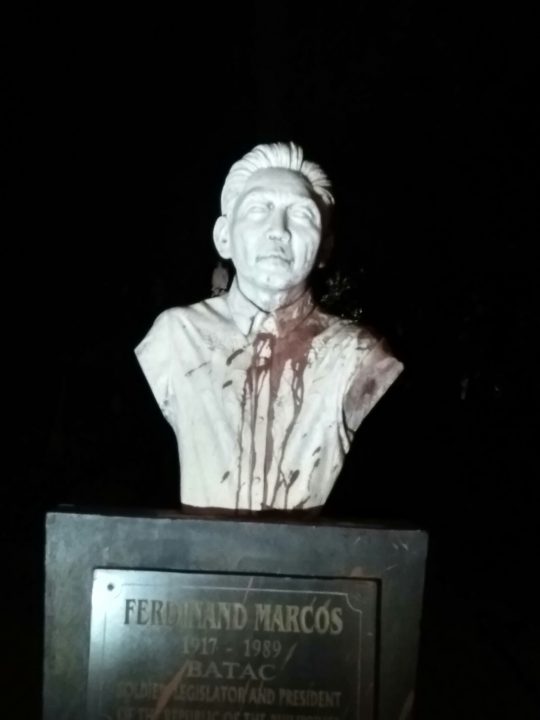 Karlo Agbannuag, KM spokesman, said in the statement that “the youth and the people will never forget how Marcos Sr. and his family plundered the nation, violated human rights like torture, illegal arrests, killings and how they abused power.” Agbannuag, presumably an alias, further stated in Filipino that Marcos has no right to be placed alongside heroes of the province or country.

Gov. Imee Marcos, in a press conference on August 31, said her family apologizes “for those who were inadvertently pained” during the Marcos administration but declared that the family would never agree to a form of “apology tantamount on admission”.

The Human Rights Victims Claims Board (HRVCB) released on May 2018 the final list of 11,103 approved claimants of reparations under the “Human Rights Violation Victims for Republic Act (RA) 10368”, an Act providing payments to victims of human rights violations during the Marcos regime. The payments were sourced from recovered ill-gotten wealth. (TNM)